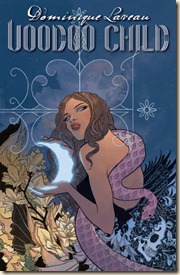 Ruling over the most haunted city in America are the powerful Voodoo Queens – but the Queen has been murdered, and Tulane grad student Dominique Laveau is the No. 1 suspect – and marked for death.

One of Vertigo’s new titles from past September, Dominique Laveau is a tale of voodoo, family and blood-ties and -feuds in New Orleans. This is one of the most atmospheric comics I’ve read, and I was hooked by the first issue. I decided to wait, for financial reasons, for the collection. Sadly, I was ultimately disappointed by the book – what had started out as a gripping, gothic supernatural tale, ended up a bit of a muddle.

Dominique Laveau: Voodoo Child is a dark, gothic tale of family, feuding, power, and a city still recovering from the devastation wrought by Hurricane Katrina. In the first issue, we’re quickly introducing to key players, and get a glimpse of their motives and agendas. Dominique finds herself caught between two sides of an ongoing supernatural war.

The story doesn’t follow a standard, linear path. The first few issues jump back-and-forth, giving alternative perspectives on a few key events, while simultaneously moving the story forward. The first three chapters, in particular, are a whirlwind introduction to this darker side of New Orleans (a city which is, in itself, just as much of a character as the flesh-and-blood ones), to the history of the NOLA supernatural world. 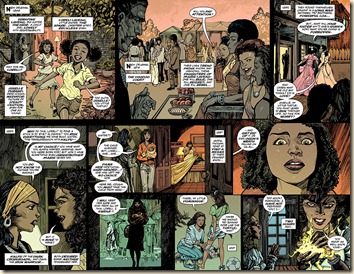 I must say, I didn’t find the eponymous character as interesting as everyone else in the story. Dominique never really develops. She goes from a freaked out and in-over-her-head Tulane University student, to a perfectly comfortable in this world Voodoo queen. She just doesn’t have much of a character. The emotions she ‘displays’ didn’t ring true, and felt flat. She overcomes the deaths of two apparently close friends and being chased by a huge werewolf rather easily and quickly. But we’re told it is painful for her to be confronted by specters of her dead aunt and mother. We are told that she’s very much in love with Allan (who disappears for a while). Sadly, given the length of the series, and the relative size of the cast, we don’t really get to know any of the characters as well as I would have liked. Baron Samedi featured enough that we get a good idea of his character, but even here we barely scratched the surface. I almost wonder if the series should have been a story about him and the other Voodoo deities. 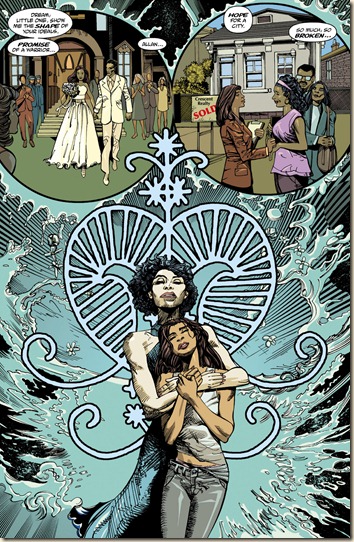 During the trials she is put through by the Voodoo court, Dominique asks Legba, “Enough with the mysteries! Why are you doing this?” I found that I had a similar question on my mind for  a good portion of the second half of the book. The trials (in chapter four), were weird, certainly, but also vague and seemed to be weird for the sake of being weird? It became more strange the more I read. What had started out as a very promising title ended up sadly muddled. There are so many things that are left unexplained, questions left unanswered. The six-year jump for the final chapter, for example, only made things even more vague and gave the story even more narrative holes. Why was more not made of the Other Side of New Orleans? It takes up all of a handful of pages in chapter two, and then basically disappears from the story. It was a superb development and bit of (other)world-building, and I would have loved to see more done with it. 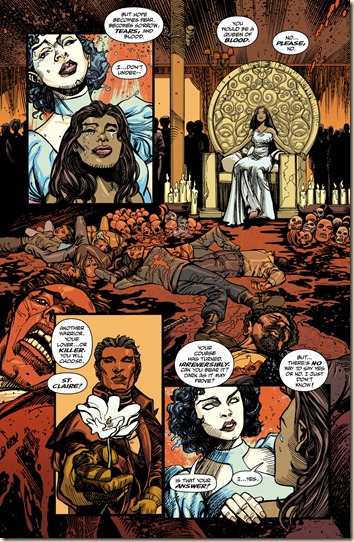 The series alternately needed more issues and also tightening. Despite frequent mention, the aftermath of Katrina and its impact on the people of New Orleans is not explored as much as I thought it could be. (This may have been a conscious decision on the part of the author, to write a NOLA story that did not focus on Katrina.) The world and setting has tons of potential, and while some of it is reached, there were a lot of areas that needed expansion and development. It would have suited a longer-view narrative, with way more focus on character development. Building incrementally, rather than whisking the reader through without much time to truly look at what we're being shown.

The artwork is dark and atmospheric, and very much suits the story, adding to the atmosphere and gothic beauty. With a sketchiness reminiscent of Moritat’s style (All-Star Western), but more detailed, the book retains an edginess and roughness, giving the story extra depth and grittiness. The feel reminded me of Anne Rice’s New Orleans (that of the Mayfair Witches, mainly, but also of her Vampire Chronicles), only more rooted in voodoo than the contemporary Western supernatural. Speaking of, it was certainly refreshing to read a story set in New Orleans, and not a more built-up metropolis like New York or Los Angeles.

Dominique Laveau falls squarely in the weird-and-wonderful side of Vertigo’s catalog, but unlike The Unwritten, Sandman and even Fables, it doesn’t reach the same level of quality. It’s interesting and well put-together, but it needed a far stronger central character. It is an overall disappointment, but not one without something to offer readers. Anyone looking for something unconventional, dark and beguiling should find something in here to satisfy them. 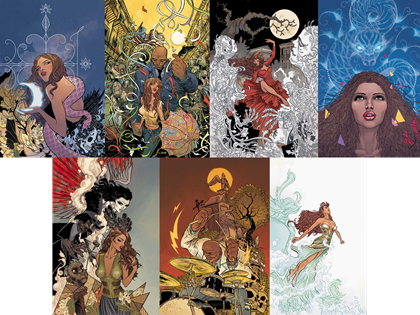 Posted by Civilian Reader at 3:54 PM