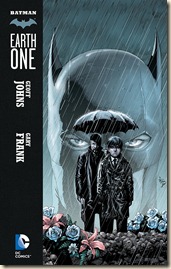 Batman is not a hero.

He is just a man.

In a Gotham City where friend and foe are indistinguishable, Bruce Wayne’s path toward becoming the Dark Knight is riddled with more obstacles than ever before. Focused on punishing his parents’ true killers, and the corrupt police that allowed them to go free, Bruce Wayne’s thirst for vengeance fuels his mad crusade and no one, not even Alfred, can stop him.

Following on from the huge success of Superman: Earth One (both volumes of which have been New York Times bestsellers), Geoff Johns and Gary Frank bring us a new take on the origin of the Dark Knight. It’s an interesting and bold move, actually, given how well the origin story has been re-visited in the New 52 Batman titles. That being said, the Earth One books are meant to be taken as completely separate entities, which is just as well: this is quite excellent.

Batman Earth One is dark, and a perhaps more gritty take on the Batman origin story. Johns delves a little more into what the Waynes were up to before their murder, and the emotions and ultimate reason for Bruce’s motivation for becoming a vigilante.

It’s mostly set very early in Bruce’s career as Batman. He makes a lot of mistakes in his early sojourns, too. For example, he’s missing his marks, running blindly and bull-headed after his quarry, cavalierly ignoring things that would make most people pause. For example, the width of an ally over which you intend to jump:

He’s working with faulty gadgets, too, which almost causes him as much grief and damage as his enthusiasm. Thankfully, being Bruce Wayne, one of the richest men alive, he’s able to find a new ally who can help make his gizmos work for him, rather than against him. 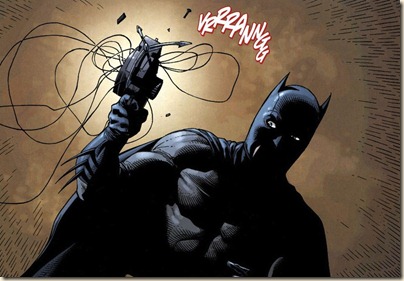 I love this panel: the slightly-comic emotion and frustration that the art team has managed to pack into it is masterful.

Some of the key differences in the book are found in the characters. For example, Albert is a real badass: he’s a British Royal Marine veteran, older and hardened by a long, successful career as a soldier. He’s not the professional butler that we know and love from the typical Batman chronology and story. After Mr and Mrs Wayne’s death, he is made Bruce’s legal guardian, much to his surprise and consternation. At first, Bruce is suffering tremendous grief, and he refuses to talk, barely eats. Alfred manages to get through to him, and lies to Bruce, claiming to be his butler. He rises to the challenge admirably, though, and teaches Bruce a number of important, hard lessons about how to fight. 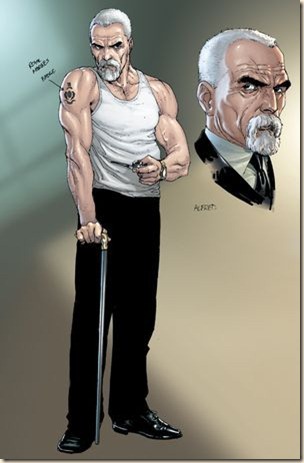 In this reality, Oswald Cobblepot (aka the Penguin) is Mayor of Gotham. Naturally, he’s got a lot of shady deals going on in the background. And what is his connection to the Birthday Man…?

Not-yet-Commissioner Gordon is here, too, but he is a slightly more timid character in Earth One. He’s acquired a new partner from Hollywood, Bullock, who drives him up the wall. The book sees Batman’s investigation into his parents’ murder merge with the Gotham PD’s hunt for a serial child killer. Over the course of the novel, both of the detectives will alter their approach to their jobs: Gordon will come into his own, after realising that the only way to clean up the streets is to meet the thugs and crooks with unwavering force; Bullock, on the other hand, at first cocky and confident-bordering-on-arrogant, will slowly become beaten by his brutal introduction to Gotham’s worst citizens. [There’s a really good, full-page piece late in the novel that perfectly evokes his despair after witnessing the things he’s seen…] In many other Batman stories, the cops are so peripheral as to be mere plot devices. In Batman Earth One, they feel like real, fully-developed and integral cast-members. I really liked that about this book. 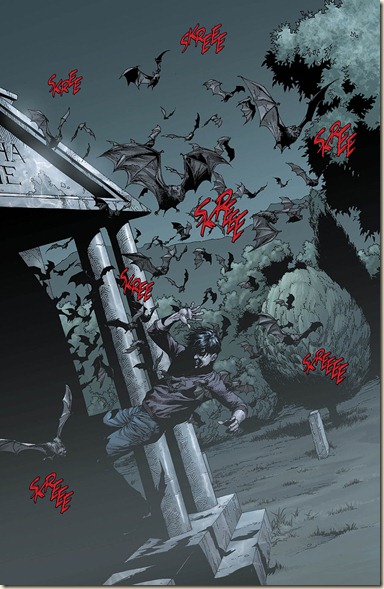 The artwork, as you can see from the samples here, is really great. The ambience the colors have created is great throughout, and Franks imagery is powerful and eye-catching. I think the only niggle I had, was that in some panels they were maybe a little heavy on the facial lines.

Batman Earth One takes a lot of surprising turns, drawing on familiar atmosphere and themes from previous takes on the Batman origin story, but reinventing many crucial elements of the mythology to create something original, fresh and utterly engaging.

Highly recommended, this is superb. I really hope they publish more in this series.

See also: Superman Earth One Volumes One and Two