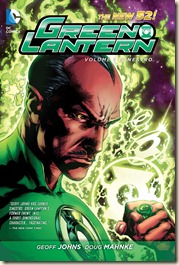 In the aftermath of a deadly showdown between the Green Lantern Corps and a mysterious foe from the past, Hal Jordan has been stripped of his ring. Left standing is an unexpected new Green Lantern: Sinestro! And now, this renegade Lantern has set a course for his homeworld, Korugar with one purpose: To free his people from the scourge of his own Sinestro Corps, with the not-so-willing help of Hal Jordan.

I started reading Sinestro after finishing a novel at about 2am. I wasn’t tired, and I thought I’d give the series a try. For some reason, I had been hesitant to buy any of the New 52 Lantern-related series. With a lack (at that time) of knowledge of the Green Lantern universe and mythology, I just wasn’t as interested as I was in Batman- and Superman-related titles. After reading and enjoying a couple of the other Lantern series (GL Corps and Red Lanterns, for example), I dove right into this one with high expectations. Thankfully, this collection exceeded them, and I found it to be quite excellent.

As with so many of the New 52, this book really made me want to read more of the pre-52 books, to get some more back-story and expand my understanding of the Green Lantern mythology. That’s not to say that Sinestro fails to welcome new readers; far from it. We’re given enough exposition and mentions of past events to locate us in this new beginning – this despite the story being firmly grounded in Geoff Johns’s previous Lantern books (of which there appear to be many). The three large story-arcs – Blackest Night, Brightest Day and Sinestro Corps War – are particularly intriguing, now, and have been placed on the TBR list.

I blitzed through this book. We’re mostly following Sinestro, as he attempts to atone (in his own, particular, way) for his actions at the head of his eponymous Corps of Yellow Lanterns, who utilise the power of Fear instead of Will. His former followers have ravaged his home-world in his absence, enslaving the populace instead of protecting it. I can’t help but think he was incredibly naïve to think an army powered by Fear would be the benevolent leaders he seems to have envisioned… It’s probably only mildly better than putting Red Lanterns (powered by Rage) in charge…

In order to execute his plan, Sinestro recruits the now-fired Hal Jordan to his cause, who has been struggling with some non-hero re-entry issues of his own (not unlike Guy Gardener in Green Lantern Corps Volume 1, actually, only he’s still a member of the Corps). Sinestro snares Jordan’s help by fashioning a new ring – one that is bound to Sinestro’s Will (he can shut it off at any time, it can’t be used against him). Playing on Jordan’s sense of duty and fervent desire to once again serve as a Green Lantern, it doesn’t take much to convince him. 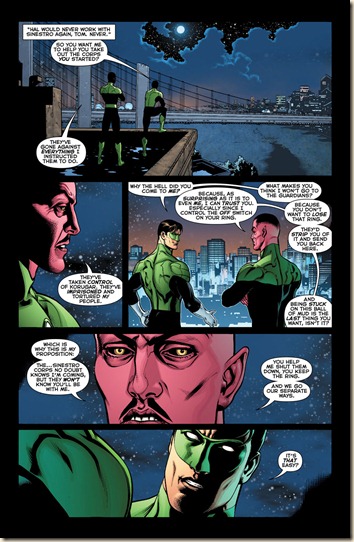 The book sets up for the Third Army storyline (which is currently running in the monthly issues), but doesn’t give too much away. We learn more about Sinestro, what drives him and how he views other Lanterns and the Guardians. He is presented as a far more complex character than some might expect.

Sinestro’s treatment of Hal Jordan is particularly interesting. While highly critical and manipulative, it could also be seen as his not-particularly-friendly-way of giving Earth’s Lantern a wake-up-call. Sinestro does, after all, basically school Jordan in how limited the human has been thinking. 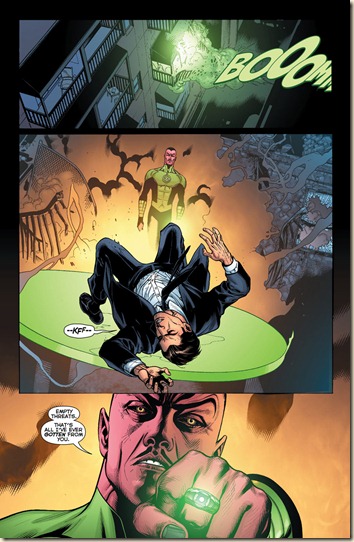 Things don’t all go according to Sinestro’s plan, as those he left behind on Korugar are not moved to welcome him back with open arms. Indeed, he has to face off against a particularly upset former ally, someone who had devoted herself to his cause. The solution he and Jordan come up with is audacious and big, and I think Johns has done a great job of pulling it off in the story.

The artwork throughout the book is really fantastic – the images are sharp and vibrant (sadly, some of the best examples I could find were spoilerific, so I’ve stuck with the images you see here). There are plenty of arresting panels, full- and double-page spreads. It’s a wonderfully put-together book. Coupled with Johns’s superb storytelling and great script, this is a very fine start to a series. I really wish I’d got to it sooner.

[I have managed to get a copy of Volume 2, “Revenge of the Black Hand”, through NetGalley, so expect a review of that over the next couple of days.] 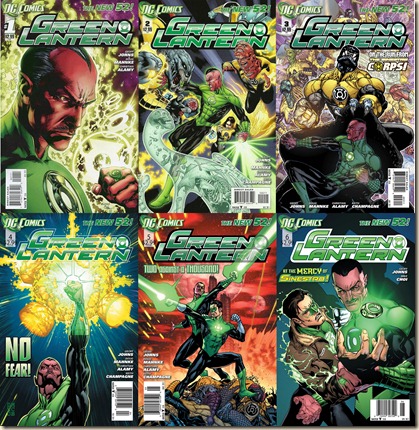 Posted by Civilian Reader at 11:56 PM