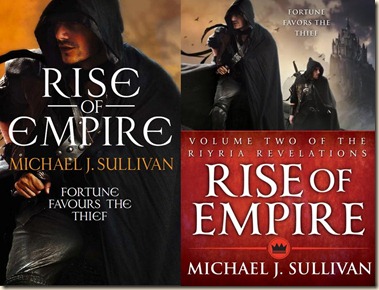 Fortune favours the thief, in the second Riyria Revelations omnibus

The adventures of Hadrian and Royce continue, and Sullivan ups the ante across the board. The Empire is flexing its muscles more, and have sent out an agent to spread dissent and discord in areas of resistance. In Rise of Empire, which contains Nyphron Rising and The Emerald Storm, this series just gets better and better. It met my high expectations and, despite the shift in tone, maintains Sullivan’s position as one of my favourite new authors. This is definitely a must-read series.

Royce and Hadrian are in difficult place at the start of this book, especially Hadrian, who has started drinking heavily. Royce has to come up with a way to break him out of his funk: a new mission. As Hadrian learns the secret of what his amulet means, our two heroes find themselves with a new quest. Arista, through her own actions, winds up tied to Riyria once more, and joins them as they travel to first Hadrian’s and then Royce’s childhood homes. From there, events quickly spiral out of control, and our heroes find themselves entwined in the future of the nationalist opposition to the rising Empire.

Thrace, who won the contest to become Empress at the end of Theft of Swords is, as expected, a puppet figure, actually kept locked up in the dungeon. Renamed Modina, she is in shock, almost catatonic. But, thanks to the kindness of a stranger thrust into an awkward situation, she starts to come back to herself. Amilia, the kitchen maid who is pressganged into imperial service, is a great character. She has none of the airs and graces of the nobles she used to wait on or clean up after, and adds a very down-to-earth and above all kind element to the otherwise depressing life of the new Empress. As the story progresses, she grows into her role admirably and even gains the respect of some high-ranking members of the church.

There’s a new surprise for our intrepid heroes in this volume, in the form of an old acquaintance of Royce’s. Working for the Empire, Merrick Marius may not be a match for Royce in most skills, but he certainly is when it comes to ingenuity and overall sneakiness. In fact, Royce’s past and lineage seem to cause Riyria quite a lot of trouble actually, which I can’t imagine Hadrian is too pleased about. Merrick’s fiendishly clever plan frustrates Hadrian and Royce throughout, as he seems to have predicted their every move.

One of the best things about Sullivan’s writing is the genuine feel he gives Hadrian and Royce’s friendship. Their banter and so forth feels very natural, and in this second pair of novels Arista’s part in the group also grows and comes to feel equally comfortable. The more we read about these characters, the more we see how they develop and how events shape them. It’s really great stuff.

Arista’s role in the series develops and changes as her character does, and her role in the fight against the risen empire becomes ever more important. She’s more feisty in these two novels, which is a very welcome development. She comes up with some pretty ingenious plans, utilising her growing understanding of and skill with the Art, but she is not always as lucky as Royce and Hadrian. Speaking of the Art, I like that Sullivan has her experimenting with it, and learning how it works by trial and error, rather than suddenly morphing from neophyte to sorcerer extraordinaire. I had only one problem with Arista’s storyline, and that was with her love-interests. Her affections for certain characters didn’t feel as convincing as characters’ other relations and interactions. It’s not a problem with the characters themselves, it’s just that her falling for them felt a tad contrived, especially when it’s pretty obvious who she’s meant to end up with.

On a related note, Gwen (Royce’s love interest) undergoes a bit of a change at the start of part two, which I thought was a little strange: she’s discussing marriage and she just sounds… off, switching entirely from driven and slightly intimidating, strong madam to talking about being like a family of squirrels and having a Hallmark-esque life. It’s the only thing about the book that didn’t sit well with me.

One thing that was very quickly clear: the Riyria Revelations have moved away from the humour of The Crown Conspiracy (part one), and the tone set in Avempartha (part two) appears to now be the norm for the series. There’s nothing at all wrong with this, but it’s an interesting decision, given how good Sullivan’s humour was in part one. Rise of Empire has a more serious tone, as our heroes are put through the wringer a few times. There are triumphs, but they come with losses on the side. By no means does the series suffer from the change in tone, and there are a few moments of wry humour sprinkled across the two novels that make up this omnibus. That being said, some of the debut’s magic creeps back into the second half of this book, and Hadrian and Royce seem more like their first book selves in the final 20% of the omnibus, which I must admit I very much enjoyed.

I preferred Royce and Hadrian’s story in Nyphron Rising (part one), but Arista’s and Thrace/Modina’s was more interesting in much of The Emerald Storm (part two) – until the last few chapters, as the tension ratchets up. Hadrian and Royce spend some time as shipmates, following up on clues about Merrick’s plans. The maritime chapters were rather detail-heavy about the workings of the ship and its crew (perhaps more so than necessary). Sadly, it did not dissuade me of my general disinterest in maritime fiction, but this is not the fault of Sullivan’s writing – I’m just not that interested in fiction set on ships. The story improves considerably after the ship sinks and they head into the jungle. More attempted betrayals follow, but our heroes’ luck holds out. In the jungle, the shit really hits the fan again, as the pair must deal with mystics, self-loathing religious fanatics, and a crazy king and his inhuman horde. Among other things. This part of the novel, as well as being brilliant, kind of reminded me of Sam Sykes’s jungle scenes in Black Halo, only minus the hallucinated monkeys and abominable fishmen...

Rise of Empire is a pretty large book, which is fantastic as there is all the more fantasy fun for us to enjoy. The book confirms Sullivan’s skill as an author, and shows how it has grown. There seemed to be fewer issues with the plot progression, fewer “fortuitous moments” or deus ex machina events. These weren’t exactly a problem in the first omnibus, but I didn’t find myself muttering “Huh, that was handy” at all while reading Rise of Empire like I did a couple times during Theft of Swords.

The first novel that comprises this book ended rather abruptly, I thought. The second ends on a really good note (wouldn’t say “high” note, as things aren’t going so well for our heroes...). Despite being the middle volume of the series, Rise of Empire felt like the story was moving forward at a decent pace – the novels didn’t feel like filler at all, and were very satisfying.

I really enjoyed this, and it definitely lived up to my high expectations. There were some surprises, and a change in tone that suited the story. I really can’t wait to get my hands on the final volume. This book has definitely left me wanting more. Much more. If this doesn’t become a classic, I’ll be amazed (and disappointed).

If you like fantasy – epic and sword-n-sorcery, in particular, but really all (sub-)genres – then the Riyria Revelations are for you. 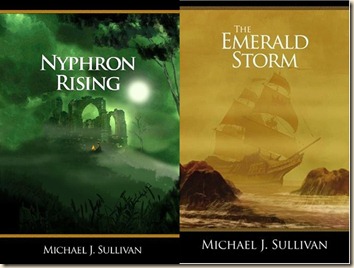 Posted by Civilian Reader at 7:14 AM