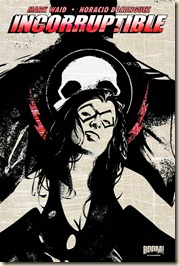 Meet Max Damage, the world’s most notorious super-powered criminal and enemy #1 on the FBI’s most-wanted list. Known for everything from manslaughter to terrorism, no one could match Max’s appetite for chaos. But that was before the Plutonian, the world’s most beloved superhero, turned his back on humanity and slaughtered millions in front of Max’s eyes, leaving Max a changed man. Now, as the world spirals into chaos, Max continues his inflexible quest toward enforcing absolute law. But when so many need him, can he be there to protect the few who depend on him… or will he be forced to learn the deadly cost of justice?

In the second volume of this series, Max Damage continues to prove to others that he’s reformed – he must convince those he saves that he’s not working some other angle; he must convince the cops that he’s working for the greater good. He is not, however, above taking advantage of his bad reputation, and in the chaos that has followed in the wake of the Plutonian’s personality flip, works towards shutting down some of the city’s worst criminal operations. This series is a perfect companion to Irredeemable, and is a great series in its own right, and one that keeps getting better.

At the end of the previous volume, Max’s sidekick, Jailbait, leaves him, and this volume finds Max still trying to adjust to her departure. The relationship between Max and Jailbait is oddly, inappropriately touching. The FBI's most-wanted criminal and his 16yr-old girlfriend, called Jailbait, whom he rescued from a brothel that caters to super-villains... Not the stuff Disney movies are made of, but Waid’s written it in an interesting way with nuance and heart. Max is trying desperately to change their dynamic, guilty for how they were in the past, determined to ‘save’ her. With the help of Detective Armadale, Max-appointed liason with the police force, he tracks Jailbait – real name Terri – down, and they work together on a rescue plan, and things don’t turn out exactly as he hoped or could have predicted.

In addition to his personal troubles, Max must also confront some of the unintended consequences of the Plutonian’s new madness: criminal inspiration. There are white supremacist groups who claim to be “doing the Plutonian’s bidding”, by murdering a bloody swathe through the city. Not only that, these groups have discovered how Max’s powers work, which can only be bad news…

Waid’s writing continues to be great, with realistic dialogue and a pleasant lack of cliché or tired tropes. The pacing is great, and it feels like a satisfying and substantial read – like we’re getting a hell of a lot of story each chapter.

The series has a different artist from the previous volume. I’m kinda torn about this, because I really liked the art in Volume One, but I also rather like Domingues’s work. It’s really good, but distinctly different from Jean Diaz’s. It’s a tiny bit more cartoon-like or possibly manga-inflected. I really like the way Domingues portrays motion, too – not through the normal “motion lines”, but the artwork is sometimes blurred, like movement might be on a camera. Really nicely done. This book has a good number of great, eye-catching full-page or double-page pieces, too (like the one early on when Max stops a car from underneath…).

Overall? This is a solid continuation of the series, and ends on a very promising note. I really enjoyed it, and I’m glad there’s still a fair bit for me to read and catch up on. I’ll review volume three next week.

[This volume also includes an 11-page preview of The Unknown, another of Mark Waid’s series.]