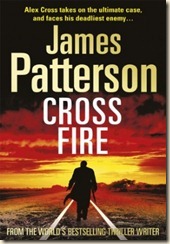 Snipers, Killers, and the Cop stuck in the middle

Detective Alex Cross is planning his wedding to the woman he loves, Brianna Stone. But this blissful existence begins to unravel when Cross is called to the scene of the perfectly executed assassination of two of Washington DC’s most corrupt and publically hated political figures. As more crooked politicians are picked off with similar long-range shots, public opinion is divided – is the marksman a vigilante or a hero?

Media coverage of the case explodes, and the FBI assigns agent Max Siegel to the investigation. As Cross and Siegel battle over jurisdiction, Alex receives a call from his deadliest adversary, Kyle Craig. The Mastermind is in DC and will not stop until he has eliminated Cross, and his family, for good.

James Patterson’s Violets Are Blue was the first thriller I read and devoured. I was living in Japan at the time, so getting more of his novels was a little difficult, but I managed to find a couple of them. In some ways, Patterson deserves the blame for getting me back into reading in a big way (him and Bernard Cornwell, actually, as I was also working through all the Sharpe book at the time). After getting back to the UK, I read everything by Patterson that was available at the time, and for the most part loved them (there were a couple of duffs). Then he started farming titles out to other authors, and the quality took a dive. The main Alex Cross series, however, remains his and his alone and is still his best. There have been wobbles along the way, and not every instalment has gripped me, but they all – Cross Fire included – give me exactly what I’m expecting and want: a quick, entertaining thriller fix.

Cross Fire is the 17th novel in the Alex Cross series, and can be counted among the better recent novels (I still think the best all came before Four Blind Mice). It draws some of its inspiration from the 2002 Washington Sniper, but instead of random killings, the sniper team in this novel is far, far more targeted and calculated. They are working to a specific goal:

“And what’s the mission, Mitchie?”

“Clean up this mess in Washington, just like the politicians always say.”

“That’s right. They talk about it—”

“But we gonna do something about it.”

We spend a fair amount of time with the snipers, and the more we do the more we realise that there’s something else going on in the background. Their motives may not be entirely their own: are they just angry vigilantes, going after bad eggs from the headlines, or is it something more? It’s an interesting premise, and given the ending I hope Kill Alex Cross (the next and 18th novel in the series) builds on the shadowy-puppetmasters angle.

The idea of a killer going after corrupt politicians and lobbyists from the headlines is not a new one, but it does offer some interesting considerations for both the narrator and the characters:

“Unless we got very, very lucky, someone else was going to die before this was over. And it was most likely somebody who many people wouldn’t mind seeing dead. That was the beauty of this terrifying game.”

I think the best novel that focused on disgruntled Americans going after corrupt politicians was Vince Flynn’s excellent Term Limits, which I very highly recommend to all thriller fans (in fact, just read everything by Flynn – his thrillers and characters are superb). In Cross Fire Patterson does a good job as well, but the strength of Patterson’s books lies is in his bad guys – they are frequently some of the most interesting and twisted, coldly evil. They are also, creepily, all too believable. These villains are not cartoons, they are not over-the-top. They are just downright evil.

Take Kyle Craig, for example: former colleague of Alex Cross, but now the “Mastermind”, criminal extraordinaire. Recently escaped from prison, he has carried his grudge towards Cross with him all the time, plaguing the detective on a number of occasions. In Cross Fire, though, they are on a collision course, and by the end of the novel, Cross may be able to close the book on the Mastermind for good.

Throughout Cross Fire, Kyle Craig’s working in the background, playing out his own long-game against Cross, twisting events to suit his needs. Some random-seeming murders are used by Cross’s nemesis to send a message, with some strange consequences – Craig helps Cross catch another killer. Craig’s playing his games, and Cross is forced to take part. It’s very interesting to have read about how their strange relationship has developed over the course of the novels (since Roses Are Red, when the Mastermind’s identity was finally revealed).

The extra cases that were thrown in to add colour and more options for Kyle Craig, were not as seamlessly integrated as Patterson’s managed in the past, but they’re still done reasonably well.

The novel’s pacing is, as expected, extremely brisk. Patterson’s prose is tight and clipped throughout. I can’t imagine anyone expects anything else from this author, as he is so famous for his massive chapter count for ever book (this one, for example, has 117 chapters, but is still only 384 pages long in hardback). Cross Fire is well-written, but still doesn’t come near to matching the quality of Violets Are Blue and the six novels that came before that. I blitzed through this novel, and there’s plenty to keep people reading until the end. There aren’t too many surprises, though, which was a disappointment.

I found the an abundance of schmaltz and soppiness rather excessive – all of it related to Alex Cross’s home life and relationship with his fiancée – and really detracted from the thriller and crime-solving elements of the novel. I don’t know why Patterson thinks this is so necessary for the series – but it’s on the rise, and in my opinion weakens the novels. He’s dangerously close to crossing the line into “fluff” territory (some of his other series have well and truly crossed that line, and show no signs of redeeming themselves).

There are plenty of better authors of more intelligent or cerebral thrillers out there (Flynn, Kyle Mills, David Baldacci, and John Sandford are my favourites), but you can’t beat Patterson for a quick thriller fix.