“Viscount & the Witch” by Michael Sullivan 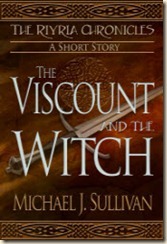 A great prequel to the Riyria Revelations

Eleven years before they were framed for the murder of a king, before even assuming the title of Riyria, Royce Melborn and Hadrian Blackwater were practically strangers. Unlikely associates, this cynical thief and idealist swordsman, were just learning how to work together as a team. In this standalone first instalment of The Riyria Chronicles, Royce is determined to teach his naive partner a lesson about good deeds.

Michael Sullivan offers new readers and long-time fans a short story set in the same world as his Riyria Revelations series (coming soon from Orbit). Showcasing Sullivan’s talents as an author, this is a fantastic introduction to his characters and writing.

This will be just a short review, as to go into too much detail would spoil the story (it’s really not very long). The Viscount and the Witch establishes Sullivan’s main characters and their relationship very well and very quickly. The story is very short, but Sullivan has managed to pack in a surprising amount of characterisation into its slim length.

Royce and Hadrian, newly teamed up as gentlemen of questionable employ, stumble across a dilapidated farm. The old woman who apparently owns the place asks them to rid her of the “dangerous” vagrant who has holed up in her barn. Only, when our heroes investigate, the vagrant turns out to be anything but dangerous. As Hadrian and Royce interrogate the vagrant, we see their dynamic wonderfully rendered on the page – and it really works. They have quite different characters, but are both sly and sharp as tacks. Their differences are the cause of a good deal of the humour that infuses the story, and Royce has a particularly interesting background – of which we learn a little in this story.

The story is, ultimately, an introduction to Hadrian and Royce – by the end of it, not only did I feel at home reading about them, but I really enjoyed their company. This bodes extremely well for Riyria Revelations (of which I have the first omnibus, Theft of Swords), which has just been bumped up the reading order based on the strength of this short story.

Interesting, funny, and promising so much for the future (well, past, actually, as this was written after the series proper). The Viscount and the Witch is very highly recommended as a cheap (UK/US) or free way to check out Sullivan’s writing, and become hooked on the adventures of Royce and Hadrian.

Go. Read. Enjoy. Then go pre-order the rest of the series.