For the first week of 2012, we get quite a nice mix of new comics. I’ve gone for some superheroes, an undead king, a British Cold War spy, a creepy theatre, and some horror. All in all, a pretty good selection.

While I have your attention: expect lots more comic and graphic novel reviews to appear on the blog in 2012 – I keep finding more and more titles that are interesting and worth mentioning, so I’ll try to feature as many as I possibly can. Especially after I get back to New York, when I’m going to have a lot of DC titles to catch up on as well.

Reviewed Herein: Cold War #4, Irredeemable #33, Monocyte #1-2, The Theatre #4, Valen the Outcast #2 [For some reason, I seem to have reviewed them in reverse alphabetical order…] 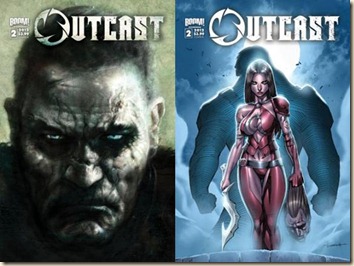 The King is dead – long live the DEAD KING! King Valen Brand was a just king and a great warrior until he was killed by a Necromancer in battle and resurrected as one of the walking dead. Now he’s considered an abomination in his own realm, an outcast with only one purpose: to restore his lost soul...

I really enjoyed the first issue of Valen the Outcast, so I had very high hopes for the second. Luckily, I was not at all disappointed. Valen and his two companions – the witch Zjanna and the warrior Cordovan – are traveling north, and find their way barred by the warring armies of two squabbling nobles. They are press-ganged into fighting for one side, and Valen puts his strategic skills to excellent use. A desperate decision and the appearance of another foe mid-battle leaves our heroes in a precarious position at the end, and a mystery is revealed…

The writing is great, and Nelson once again manages to get a lot of story packed into such a relatively short space. There’s action, character development, and solid dialogue. I really like this series, and will most definitely continue to read it. The vivid art style only improves the reading experience – it’s eye-catching, and complements the story very well. There’s something about the style that reminds me, at times, of World Of Warcraft, only less cartoony. Really good.

This is a great fantasy, sword-n-sorcery title. Highly recommended for fans of Demon Knights, Red Sonja, Game of Thrones and Conan. 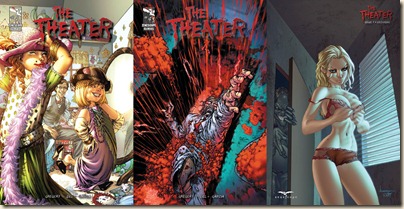 Two best friends find a monster living in their midst and the means by which they attempt to rid of it may very well turn them into monsters themselves. Meanwhile, the body count at the theater continues to rise as more is revealed about the horror within.

As with previous issues, we are treated to someone introducing a movie and then ‘watching’ it along with the characters in the comic. This time, it’s an interesting story of neighbourhood vengeance, when a couple of family men decide to take things into their own hands under the guise of protecting their families. We get a little bit more about the Theater itself, and what might be going on in the background, including some comments at the end that address a couple of weaknesses of the ‘movie’ we watch in this issue.

This remains an interesting concept, but there’s something about the very small tidbits of information about the Theater that make it a little difficult to figure out where we’re going in the future. It’s still well written and the concept is interesting enough that I’ll be coming back for issue five next month. 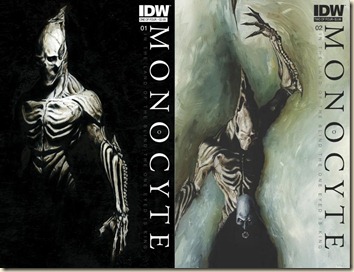 Two warring immortal races rule a scarred world where time has no meaning. Death (Azrael) sits impotent, quietly planning his restoration. He summons Monocyte, a forgotten immortal necromancer who long ago chose sleep in his failed quest to die. With a fatal pact sealed, Monoctye strikes out as Azrael’s vicious proxy.

This is a really interesting series. It’s a cross between a comic and prose fiction – there are a couple of pages of text, explaining who each of the races are, for example. The “bestiary” style explanations of the two races are good and interesting. However, the one for the “Olignostics” was a little techno-jargon heavy, which meant I had to re-read it to make sure I followed (I’m still not 100% sure I did…). I’m not sure how else they could have done this without wasting pages, so at least we should be thankful that the writers did it quickly and with minimal fuss. The story’s good, but not as accessible as I would have liked. I’m sad to say that it occasionally tends to lean towards style over substance, but there is an interesting technology-vs.-nature element to the story and the on-going war of this dystopian far future. There are some elements that could have been incorporated a little more seamlessly, but for the main this is a very well put-together and intriguing title. A couple of short, bonus stories are included in the first book – one about the Olignostics’ “Shepherd” (it’s two pages long, doesn’t really explain anything) and the other about the Antedeluvians’ Messenger (which was longer and more interesting).

There’s a frustrating typo on page one of the first issue… At least, I think it’s a typo – “reign” instead of “rain”, so unless it’s some obscure reference, it’s definitely a mistake. Another example is “divineness”, which isn’t a word – it should be “divinity”. This, to be fair, is not a failing of just Monocyte – I’ve noticed a lot of comics have issues with malapropisms.

The artwork, on the other hand… Well, it’s stunning. Wonderfully dark and gothic, but unlike anything else I’ve seen. It reminds me a little of John Blanche’s (who did a lot of early artwork for Games Workshop’s fantasy and sci-fi settings). The esoterically-named “menton3” has a great style for this genre (or any, really, but it’s particularly suited to darker, more horror-inflected stories), and it’s worth checking this comic out just for the art, even if you don’t like horror at all. I’d love to have a print of the second and third page spread (issue one) to put on my wall. Here’s a part of it: 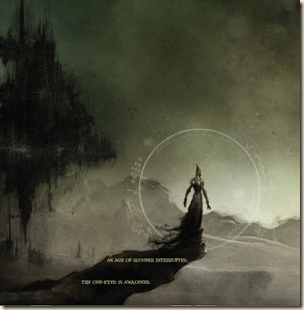 What’s really impressive is that the artwork in the second issue is even better.

A beautifully dark title, I’d recommend checking it out. It’s an interesting take on some common themes, not perfectly executed, but beautifully illustrated. 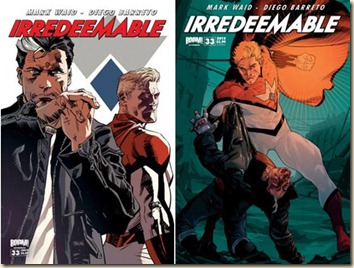 The Irredeemable/Incorruptible crossover continues toward an explosive conclusion! This is third part of this crossover event. The Plutonian and Max Damage have always been epic adversaries… but why? The superhero epic that tells the story of their first face-off continues!

This was great. As with many issues of Irredeemable, Waid delves a little deeper into the Plutonian’s history, and we see how the young boy with improbably powers actually became the Plutonian – where he got the strict moral code when he was still a superhero, who inspired him and, really, trained him to be good, and to think of others before himself. It’s always interesting to find out more about a superhero’s heritage and origin, and thus far Waid has managed it in an engaging, intelligent and original way.

And the ending? Well, now I’m utterly impatient for Incorruptible #25, which will finish off this cross-over event. May have to read some more of the Irredeemable collected volumes to tide me over.

I’m starting to wonder if reviews of Irredeemable are becoming redundant, given that I don’t want to spoil the story, and seem to always just want to announce how great it is… Which is absolutely true. So what the hell. Irredeemable is brilliant. You should be reading it. 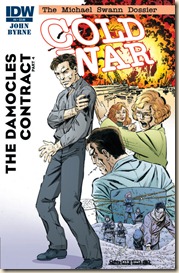 Former MI-6 agent Michael Swann is in Russia, working against time to prevent the Soviets from gaining nuclear dominion over the planet. But what he doesn't know is that he may already be too late!

Hopefully Swann survives to fight another day, but that remains to be seen...

This is the final issue in the Damocles Contract. After very quick first page catch-up, we are thrown right back into the story. Swann has taken a dive off the Soviet train, and his pursuers must make sure he’s been eliminated. Eventually, he is recaptured and taken to a secret Soviet nuclear facility, where he is tortured while they try to ascertain the veracity of the scientist’s defection. But Swann always has some tricks up his sleeves…

This was a very enjoyable four-part series, with an ending that I hadn’t expected, but was nevertheless satisfying and well-written. The whole series has been very well-written, in fact – with an obvious love for classic war stories, but updated for the modern-day reader, Byrne packs in a lot of story into relatively few pages.

If you’re after some Cold War espionage action, I’d definitely recommend this title. Let’s hope it does well enough to warrant some more contracts in the future.