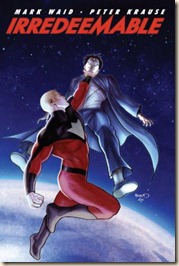 A desperate gamble, an old debt, the possibility of victory…?

The secret history of Hornet, who died at the hands of Plutonian, is finally revealed. The fallen Paradigm member had a plan – a fail safe – that puts all of Earth and the Plutonian in danger. And when Modeus’ plans reach critical mass, the few remaining heroes of Earth are the only thing standing between civilization and ultimate chaos. There’s a mad God backed up against a wall, and nobody is safe.

As the Paradigm get to grips with their ever-worsening situation, the Plutonian’s rage only intensifies. It’s strange for the synopsis to focus on the history of Hornet, as that doesn’t feature for the first half of this book. Instead, we see more cracks forming between the remaining members of the Paradigm, and we learn that yet another teammate has been keeping secrets.

Continuing the story in fine form, this collection upped the ante and added yet more backstory to one of the best comics available today. The artwork is great, the writing is gripping, and the characters are engaging and three-dimensional. Is there much more you can ask for from a comic?

[NB: As always, there are some spoilers after the break. The series has now been going on long enough that to review it is to offer some spoilers. Apologies for this.]

Dealing with the death of a team member, the Paradigm struggle to carry on with their fight against the Plutonian. Cary and Qubit are at each other’s throats about the failed attempt on Plutonian’s life (Qubit instead chose to take the life of Orian, a demon hunter who had been planning on leading an invasion force to earth).

Modeus, the mysterious nemesis who has never evinced a reason for hating the Plutonian and making his life as difficult and tragic as he possibly can, features at the centre of much of this book, as we start to understand a little more about his motivations.

Hornet’s story is pretty interesting. For one, he predicted that the Plutonian would snap and go insane. The plans he put in place, though, are both inspired and horrific in their scope. After Qubit explains Hornet’s plan to the others, the ‘failsafe’ comes into effect, and the book ends on a totally unexpected note.

Waid’s writing continues to satisfy, even if the Irredeemable story has not managed to repeat the emotional impact of the first four collections. There was a scene in Volume 3 that remains one of the most powerful I’ve ever read. It’s perhaps good that Waid isn’t dealing those sorts of scenes out every issue or so, because otherwise this would be a truly heart-wrenching title. The author has managed to establish the Plutonian’s grievance and his new character very well in the past, and has maintained that throughout. The former hero has not been continuously exaggerated, so the tension has been steadily maintained for maximum impact. He is a smouldering villain, prone to extreme cruelty and emotional coldness, which makes him unpredictable and chilling.

Peter Krause, who was the artist for the Definitive Volume, is back working on the series, and it’s a welcome return. I really like his artwork, and I think he brings out the best in the characters, complements Waid’s writing and story superbly, and overall makes Irredeemable one of the most interesting comics, visually.

The series continues to be highly recommended. I’m eager to find out where this goes next.

[Includes a 14-page preview of Stan Lee’s The Traveller.]