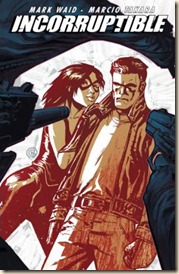 The Plutonian has been defeated, leaving the world’s most notorious supervillain-turned-superhero, Max Damage, adrift. But Max's work is never done, and being a superhero in a post-Plutonian world is far more difficult than he imagined... especially with a mentally unstable new sidekick and a new team of reluctant allies... the superhero team the Paradigm!

Tying in with the events of Irredeemable Volume Six, these Chapters in Max Damage’s story take a look at how the former villain takes the news of the Plutonian’s incarceration, and where he’ll go and what he’ll do next.

In quick summary, I’m enjoying Incorruptible almost as much as Irredeemable, and I really think people should read them both. Waid shows us how comics can be at their absolute best: enjoyable, entertaining, brilliantly written, and thought-provoking.

[Be warned: Minor Spoilers after the break…]

The story picks up right where Volume Three left off, with the Plutonian’s ex-girlfriend, Alana, defending her decision to ally with the newly-good Max Damage, and insisting that their relationship is purely platonic.

Alana’s a good partner for Max as, in her words, he lacks the inner compass that keeps other people on the straight and narrow. His guide to being a hero is to just do the opposite of what he would do when he was still a villain. She’s having a little difficulty adjusting to his eccentricities and mannerisms. In the meantime, they both have to keep an eye on Headcase, Max’s new sidekick, as she seems determined to make their lives difficult – she’s completely escaped into the masked-hero role, taking reckless risks. Max really doesn’t have a lot of luck with sidekicks… I really like how Waid has developed these characters and relationships – taking them down interesting and original routes.

Once again, Waid manages to pack in a hell of a lot of story into this collection, and it’s very nicely illustrated by Takara. The cross-over with the Paradigm (the Plutonian’s former teammates from Irredeemable) is nicely done, and should help draw a few more people across to the other title – assuming, of course, that they’re not reading it already.

Perfect companion to Irredeemable, and a great comic in its own right. Highly recommended.