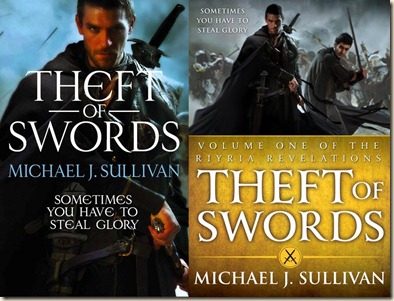 THEY KILLED THE KING. THEY PINNED IT ON TWO MEN. THEY MADE A BAD DECISION …

Royce Melborn is a superb thief, his partner, Hadrian Blackwater is a skilled mercenary. Together they make a profitable living as agents-for-hire to wealthy nobles until someone sets them up to take the blame for the murder of the king.

Captured and sentenced to death the two are saved by an unlikely woman with a simple demand that will change the lives of the thieves, the course of a kingdom, and the foundation of an empire.

Theft of Swords is the first of three omnibus editions of Sullivan’s Riyria Revelations. After considerable indie success, Orbit books bought the rights to give the series the full big-publisher treatment. I’d heard of the Riyria Revelations before, as they kept appearing in my Amazon recommendations. I bought the first book for my Kindle, but promptly forgot about it, much to my shame. Now that I’ve read this first pair of novels, I can tell you that Sullivan has a new fan for life.

The Crown Conspiracy, the first novel in the omnibus, is great fun from the get-go, as we are thrown right into some action, getting to know Hadrian and Royce extremely quickly. How can you not like a pair of rogues who advise the band of highwaymen trying to rob them on how better to have done it? The opening scenes are indicative of what is to come: the banter between our two main characters is superb and very natural. Hadrian and Royce feel like they have a proper, real friendship immediately. This makes reading of their adventures and exploits an absolute pleasure.

In The Crown Conspiracy, Hadrian and Royce get sucked into a greater plot concerning the succession to the throne of one of the Elan kingdoms – they are hired to steal a favourite sword of a master duellist, but in the process are framed for the murder of a king. There is plenty of misdirection, as we are kept guessing about who is at the heart of the conspiracy – other members of the royal family? The Nephron Church? The mysterious outlaw Esrahaddon? As our heroes delve further into the mystery, they discover the various forces arrayed against them will spare no expense to keep the truth hidden.

The second half of this omnibus, the novel Avempartha, has a slightly more serious tone, with fewer moments that made me laugh, but it is no less interesting, engaging and entertaining. It’s a great quest adventure, as Hadrian and Royce are hired by a provincial girl to help protect their village from a mysterious beast that has been terrorising and eating the villagers. In the pursuit of this job, our two heroes are sent to steal yet another sword, under advisement from a surprise returning character from the first book. Clearly, no good can come from jobs involving a theft of swords...

Sullivan has a gift for characterisation, and he does a superb job of giving each of his characters distinct sensibilities, personalities and voices – even though the novel is not presented in a first-person narrative, when we follow a character, we get a good sense of their personalities in the way observations and description are written. For example, when a high-born lady meets with Hadrian and Royce, the ruder aspects of life in this world do not escape comment. Sometimes this effect is delivered with a single of observation; at other times, Sullivan even manages it with a single expertly-placed word.

He also has a good eye for portraying people, crowds, and the ‘mob’ (to borrow Terry Pratchett’s word) – it reminded me of Pratchett or Monty Python at their least nutty and most subtle. The novel has a delightful, sympathetic absurdity (see Myron, the monk librarian with an eidetic memory, who is perhaps one of the best comic characters I’ve ever read – so very endearing and amusing). As I mention above, this is more apparent in the first novel than the second.

There were so many passages of dialogue and observation that I wanted to quote here, to give you a taste of what to expect in these two novels, but I think that would have ultimately ruined a new reader’s experience of discovering this story and the characters that populate it for themselves. Myron is the source of many of them. We liked Myron a lot, it should be stated.

“The smallest of the children fascinated Myron, and he watched them in amazement. They were like short drunk people, loud and unusually dirty...”

There are a few moments of fortuitous coincidence that help the plot move along (I couldn’t help but mutter “Huh, that was handy” a couple of times), but we do move on so well and briskly that we don’t really give a monkey’s, as we’re just having so much fun, and we really need to know what happens next. In Avempartha, the scenes where Arista, the Princess of Melengar and ambassador to the kingdom Hadrian and Royce find themselves in, tend to feel slower, dropping the momentum of the novel a little. This was a little disappointing, as the whole of The Crown Conspiracy was superbly streamlined.

Over the course of these two novels, Sullivan lays down a lot of groundwork for the larger story. We get more and more details about our heroes and the politics of this world – from the characters of the individual kingdoms, to the corrupt Imperialist politics of the Church. Some of this won’t really come as too much of a surprise, as the reader will see hints of certain events and revelations that could be easily predicted. We meet a lot of characters who will clearly feature prominently throughout the six novels that make up the series. At the same time, Sullivan isn’t afraid of killing off characters if the story requires it (Chapter 12 of Avempartha was quite distressing).

Anyone interested in lighter-hearted, but not frivolous fantasy should definitely read Sullivan’s novels. The prose is superbly fluid, the dialogue is realistic, the plotting and narrative tight and expertly crafted. It will grab hold and pull you along, utterly willing.

With a classic and fun feel, I thoroughly enjoyed this book, and highly recommend it to all fans of fantasy. True, the second half isn’t quite as good as the truly excellent first novel, but it’s still very strong and promises more goodness to come.

I can’t wait to get my hands on the second omnibus, Rise of Empire. 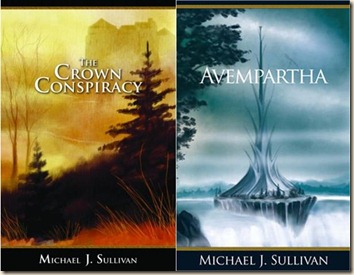