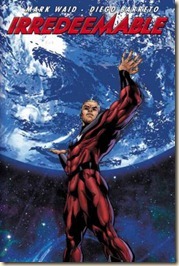 The world’s most powerful hero, Plutonian, has levelled entire countries and continues to systemically destroy the allies he once called friends. How can the world defend itself against a vengeful god? The Plutonian’s former teammates, the Paradigm, have been forced to turn toward a savage former enemy and a slim chance for survival. When the dust settles on the climactic battle to destroy the Plutonian and save the world, these struggling superheroes will never be the same. Volume 4 presents the stunning resolution to the series' explosive first year.

After reading the Irredeemable Definitive Collection, I had to find out more, so quickly got my hands on the rest of the series. After reading this fourth collection, I can tell you that Irredeemable just keeps getting better, as the Paradigm continue to search for a way to put down the Plutonian’s new reign of terror and destruction.

[NB: There are some minor spoilers in this review. They were inevitable and unavoidable.]

This volume starts with the Irredeemable Special, featuring origin stories for Hornet, Kaidan and Max Damage’s side-kick, Jailbait. They were included in the Irredeemable Definitive Collection, but in case you didn’t catch that review (or read the book) – they’re great intros to three important characters from Irredeemable and Incorruptible. I’m not sure why the Max Damage-Jailbait story was included as an Irredeemable special, and not in the Incorruptible collections.

This volume adds more detail of the early days of the Plutonian’s change. Chapter 13 takes a look at Bette’s continued angst over keeping secret her affair with the Plutonian. Chapter 14 sees Orian and Cary return from the hunter’s dimension (in a rather grisly fashion), and we also learn more about Gilgamos’s past and a plan forms for taking out the Plutonian. In Chapter 15, the last in this book, the Plutonian catches up with the Paradigm, and he is in an uncontrollable rage. Also, a friend thought lost returns.

The Plutonian’s former colleagues from the Paradigm are still coming to terms with both their leader’s betrayal and also a number of other, smaller yet still momentous betrayals. Distrust and suspicion (not to mention a little hatred) is spreading and taking firm root within the group, and it’s anybody’s guess how this is going to turn out. The demon Orian’s presence isn’t helping matters, and he seems to be enjoying the tension altogether too much. I find Cary an interesting character – he shared his powers with his (now dead) naturally-powerless twin, and is now super-charged like never before. He seems to be the only possible threat to the Plutonian but, like his enemy, is driven more by rage than intelligence.

I really like the way each issue gives us more pieces of the puzzle – either from the characters’ past or the ‘present’ state of the world. The whole comic is very well plotted. I wonder how long the series can keep going, though. It’s still a monthly series, so there must still be plenty of story left – and, given Waid’s gift for surprising and taking us in directions we hadn’t expected, I imagine it’s still very strong. I hope to catch up, certainly, and I’ll bring you reviews of each collection before single issues.