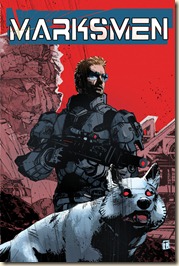 Sixty years ago the oil ran out and debts were called in. Civil war followed that splintered America into warring fiefdoms. New San Diego is a technocratic utopia that offers the last bastion of peace and prosperity, provided you live within its walls. Drake McCoy is its best protector. McCoy, an expert marksman, defends the city from the numerous threats in the wasteland outside the walls. But when the oil rich Lone Star state sends a powerful army to steal New San Diego's energy technology, even Drake’s leadership and skill may not be enough to fend off the siege.

Marksmen is a post-economic-apocalypse mini-series. It takes the current dire economic state of America and extrapolates a worst-case scenario. Blending a number of post-apocalyptic tropes (feral gangs living in the wilds and cannibals, for example) with some original elements, this is a pretty good series. It has a few more flaws than I would ordinarily like, but it should still appeal to fans of the genre who want a short series to read.

After a massive recession the United States government collapsed, leading to civil war between the cities and states, all of whom hoped to keep any last resources for themselves. The war destroyed America’s infrastructure and most of its population were killed. Much of America now looks something like this: 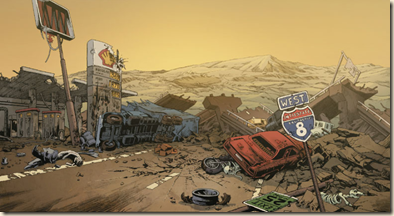 New San Diego is one of only a few cities to survive, because it cut itself off from the rest of the country. The city has been rebuilt, and is protected by the Marksmen, the descendants of the Navy Seals who were stationed at the Coronado Navel Base at the time of the collapse.

The story kicks off with Drake, one of the Marksmen, out on a mission apparently to salvage some data from an abandoned settlement. On the way, he acquires a canine companion and is ambushed by a gang of cannibals – and so begins our introduction to this world. He is rescued by some emigrants from Lone Star (a surviving Texas city) making their way to New San Diego. They hope to warn NSD authorities that a Lone Star army is headed their way, intent on acquiring solar technology at any cost – preferably one measured in bullets and dead NSD inhabitants. As it turns out, wars will still be fought over energy resources and technology.

As we read more, we learn of the tensions within the NSD military ranks, as well as a few bombshells that could spell disaster for certain relationships – new and old. The writing’s not bad, but sometimes it doesn’t have quite the natural feel I had hoped for. Some of the rivalries between a couple of the Marksmen felt forced, for example, as if put into the story just so we could have some intra-unit friction. I’m not sure it was entirely necessary, to be honest, but it does add an extra element to the story and I think there may have been a better way to do it, if the series had been longer. At just six issues, though, I suppose expediency was a real issue. By the end of the second issue, we learn more of Lone Star’s leader’s plans – the Duke is willing to use some pretty ruthless tactics to unite his people behind an all-out attack on New San Diego.

The artwork’s quite nice – it’s cleaner than the cover art would suggest, with some great full-page pieces (especially at the end of each issue). The action’s portrayed nicely, and not exaggerated (same cannot be said for one of the female emigrant, Cammy’s figure – silicone implants and Wonderbras appear to have not died out with society and the economy…). There were a few moments when perspectives seemed a little off – a large group of warriors from one side surround a captive, who nevertheless manages to escape rather easily. There were too many coincidental moments in the story that could have been handled a lot better.

The tension is ramped up over the course of these five issues, and for the most part it’s done very well. I think the writing could have been a bit stronger overall; the dialogue sometimes just didn’t really feel right, and the ease with which characters flipped their allegiances or broke loyalties didn’t always ring true. Ultimately, I think this series needed more space – more issues, which would have allowed for a little more world-building and character development. Nevertheless, this is overall an interesting and enjoyable title, and I look forward to reading the final part of the story.