Continuing my newfound addiction to G.I.Joe-related comics… The Story of Cobra

In the second season of Cobra, readers get a deeper look inside the Cobra organisation than ever before, as Tomax, Xamot, and Erika continue to feel the effects of the previous miniseries, and more  important and powerful players are introduced into the mix. Several Cobra operatives of old are also reintroduced to this new continuity.

So, in order to catch up with the new IDW-published G.I.Joe and Cobra timeline, I decided to buy the back issues. Thankfully, they were all going for quite cheap on comiXology (a site/service I am coming to feel extremely fond of), so I snapped up all of the issues. This series has three main acts, and the cover images have been split up accordingly.

Needless to say, I thoroughly enjoyed these. 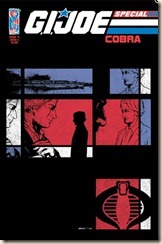 Spinning out of G.I.Joe: Cobra, this one-shot follows up on #4’s surprise reveal and focuses on the Paoli Twins.

I found this special issue pretty interesting. It focuses on the Cobra twins, Tomax and Xamot, and explains their working and personal relationship, and how Chuckles’ infiltration of their organisation effects their bond and agendas. I can’t go too much into the story, but it’s very well written, and it’s very interesting to see what happens to two identical villains, physically and intellectually, who have shared everything, when one of the twins, Xamot, experiences something painful and unique. Their shared lack of emotion to others for once is turned back on them, and fractures start to appear in their relationship. The events of this special will have repercussions throughout the Cobra series, right up until the final page of issue thirteen.

Chuckles is the only man alive to have successfully infiltrated Cobra… and he’s M.I.A. Has he been killed? Defected? Gone rogue to fight a one-man war against the enemy? None of these alternatives are acceptable to General Hawk. He wants Chuckles back with G.I.Joe, so he’s sending a new Joe to retrieve him. But what she finds may be worse than anyone could have imagined…

The first story arc focuses on the aftermath and fallout from season one, and we also see the above-reviewed Cobra Special start to have an impact on the Paoli’s operations. The arc starts with the attempted rescue of Chuckles by his new handler, Chameleon. Things don’t go quite how Chameleon and General Hawk intended, however, because Chuckles is still stuck on his previous mission, uninterested in coming in or answering to anyone else. Chuckles’s storyline is interesting. He’s been hollowed out by the events of the first season, and he’s becoming a bit suicidal. Erika le Tene, Chuckles’s former lover and assistant to Tomax and Xamot, is noticing an escalation in her employers’ illegal activities and brutal methods. At the same time, she must navigate working for the two Paoli brothers, one of whom is becoming ever more erratic. Erika becomes ever more uncomfortable with her position in the Paoli’s organisation, and things soon come to a head that leave her no other choice but to attempt to escape.

One of the most interesting things for me, alongside the greater insight into the Cobra organisational idiosyncrasies and operatives, was how ruthless General Hawk is when it comes to Chuckles’s mission. He’s almost as bad as Cobra (something Chameleon calls him out on), and this adds the nuance and anti-sheen I’d been hoping for – in other instances, the G.I.Joes are just a little too clean, and little too virtuous and perfect. That being said, Hawks’s dismissal of Chuckles was a little more cold than expected, and this certainly added to the story.

The first arc finishes on quite a bombshell, and offers exciting hints for what is to come in the future (events I’ve already read and written about on the blog).

Serpent’s Tale: General Hawk has lost all contact with Special Agent Chuckles, whose mission was to infiltrate the mysterious and evil organisation COBRA. With few clues about the nature of the shadowy organisation, Hawk is forced to turn to unorthodox measures in his quest to find the intel essential to bringing Cobra down…

The second story arc in this series focuses on the more unusual Serpentor, and his cult, The Coil. I’ve always thought this was probably the weakest part of the whole G.I.Joe universe, but I came in with a relatively open mind and hope that this would be written and composed as well as the rest of the series. As it turns out, the Coil is a handy narrative device to introduce us to some of the more strange members of Cobra.

It’s an interesting opening scene, in issue five, when the head of the cult – so far only identified as Manasian – explains and defends the public nature of the Coil (lots of tired and over-used phrases from politicians, as should be expected; attention is nicely diverted).

In order to find out more about this cult, General Hawk turns to Scoop, an off-the-books civilian private investigator. This was an interesting change – in the early G.I.Joe comics I read, Scoop was a full member of G.I.Joe (in fact, my first comic was the one that introduced the character – his first mission was, to say the least, not a walk in the park…). I have a soft-spot for journalist characters (see, for example, Jason Pinter’s novels), especially those who have fallen on hard times, chasing a huge story only to get burned for having the balls to do so. A cliché? Yes, I suppose it is, but when put in this setting, it doesn’t feel tired.

I have to be honest, though – the second issue in this arc (#6) wasn’t the best. Half of it offered some weird, religious-art representations from texts aimed at younger people, explaining the history of The Coil, going back centuries. This was rather off-putting, and kind of detracted from the main story, which I won’t spoil. The actually story-part of that issue is very good, and builds nicely on the previous issue. But the other stuff (every other page) wasn’t so good, and therefore this issue was only half as satisfying as the ones that had come before and after.

Issue seven takes us on a slight detour away from the Coil and Scoop’s investigation, and gives us a look at the origin of one of the stranger Cobra operatives, and Coil member: the Croc Master. He appeared in the first couple of issues, when Erika le Tene confronted him, but I didn’t know much about him. He seems to be the lone non-lefty eco-terrorist. It’s an interesting story, nicely done (written, drawn and coloured), and adds a nice extra layer to the readers’ overall picture of the types of people attracted to and employed by the Coil and Cobra in general. Issue eight introduces us to Cobra’s psychotic war trainer, and the unbelievably brutal training regimen the prospective troops are put through. Survival rate? Very, very low. As all the threads are drawn back to Scoop’s story, it builds to a tragic end that I had not at all seen coming.

Death of Cobra Commander: At last we return to the story of Chuckles, who was last seen in the custody of Cobra. But is he a prisoner… or an honoured guest? Can the man whose life was ruined pretending to be join Cobra have finally given in?

The final story arc brings us back to Chuckles and his fight against Cobra. He’s in a strange position – he’s held at Cobra headquarters, but nobody’s interrogating him. In fact, he seems to be rather comfortable. Nevertheless, his mission remains his driving motivation, and he does everything he can to escape. The penultimate issue in the series I’ve already covered in a previous review, as it was contained in the Death of Cobra Commander Special. Just for a quick re-cap – Chuckles’s plans come to fruition, just as the Paoli twins crack under the pressure of having Chuckles actively recruited by their boss, and Xamot’s increasing unpredictability proves deadly, all followed by the fallout of the Chuckles’s bloody success. The whole series is brought to an explosive, quite moving finale.

The artwork across all three story arcs is distinctive and well composed. It’s a little sketch-like, for the main, with attention to the overall composition than individual details. That being said, there are some great, eye-catching and detailed full-page pieces sprinkled throughout these issues. The colouring is often dark and gloomy, but with occasional brighter panels to add welcome contrast. Very atmospheric, and perfectly suited to the tone of the story. 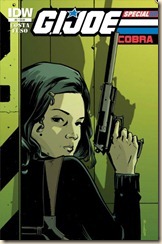 Her name is Chameleon, and she is the Joe’s newest recruit in Cobra II. Now we see the rest of her story – her recruitment, her first mission, and her mysterious connection to… [censored].

This is an interesting extra, filling us in a little bit about the Joe’s newest recruit. She’s a broken and abandoned young woman, but one with a gift for blending in. This is her induction into the Joe’s covert operations, as well as her interrogation by Firewall. Her first mission goes well, as Chameleon taps into reserves of aristocratic arrogance, calling forth a performance she was possibly meant to play her entire life. I don’t think it’s essential reading, if you’re following the overall story, but it’s a nice extra, should you want some more G.I.Joe comic action. The artwork’s not so ‘clean’: there is an almost rushed quality to a lot of it, with a few more detailed panels for contrast and to draw specific emphasis to plot points.