Upcoming: “Magic: An Anthology of the Esoteric and Arcane” (Solaris) 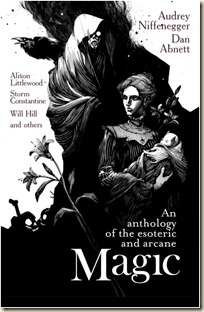 Following in the wake of two other critically-acclaimed Solaris themed anthologies, The End of the Line (set on the London Underground) and House of Fear (haunted house stories), Solaris Books will be publishing Magic: An Anthology of the Esoteric and Arcane in November 2012 in both the US and UK.

Before I get into who’s contributing pieces for the anthology (it’s a great line up, so just bear with me) – how cool is that cover? Really like it.

Anyway, back to the content. There are a couple of genre-fiction big-name authors taking part in the anthology – for example, Civilian Reader favourite (and New York Times bestseller) Dan Abnett, and also Sophia McDougall and Will Hill. There will also be contributions by some newcomers, such as Lou Morgan, who had this to say about working on the anthology:

“I’m thrilled to be part of a line-up which includes so many authors I respect and admire, as well as to be working with Solaris again. There’s such a great mix that I’m really looking forward to seeing what everyone comes up with! My own story revolves around a man who can never quite get away from his past – and for whom magic is far more of a curse than it is a blessing...”

Lou is on my list of Authors To Watch in 2012, and her debut novel – Blood & Feathers – will be published this year in July. I will also be posting and interview with Lou on February 15th, so be sure to check back for that.

“Surely everyone has at some point tried to do magic. Wishing on birthday cake candles, or willing an exam hall clock to turn back, or quietly trying to levitate a pencil with your brain – if you have not, I suggest you give it a go right now – 0r how are we to know you are not the wizard we have been waiting for? The concept of a source of incredible power that humans might be able to access, is deeply seductive.

“Magic makes the world amenable to human patterns – willing to bargain, tameable. Yet magic is frightening, because it also does the opposite. Even before you give up your soul or your firstborn, the price of magic is accepting we might have fundamentally misunderstood the way the universe works. Magic means you don’t know what’s going on under your nose: it means threats could lurk in the seemingly harmless and you might not be able to make yourself safe. And while, outside fiction, we can probably be pretty sure that magic does not exist, it remains a good lens for looking at our relationship with the unknown and with our limits. Magic works in the overlap between our strongest desires to control the world and our worst fears it will control us. ”

But, the name that has topped every press release and other blog post about the coming book, is Audrey Niffenegger – mega-selling author of The Time-Traveller’s Wife, who is writing her first short story for a commercial trade anthology. Here’s what she had to say about the anthology:

“I'm delighted to be involved in this project… My story is called The Wrong Fairie and is about Charles Altamont Doyle. He was a Victorian artist who was institutionalized for alcoholism. He was also the father of Arthur Conan Doyle, and he believed in fairies.”