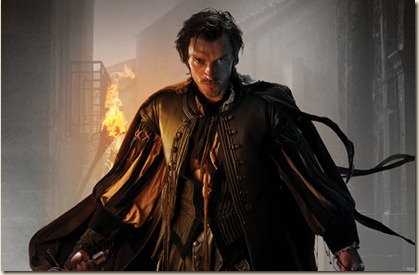 The first in what I hope to be a string of interviews with 2012 Debut authors, today Anne Lyle tells us a little bit about her highly anticipated upcoming Elizabethan fantasy, The Alchemist of Souls, her writing practices, and confesses to a history of impersonating a snowflake…

As a debut novelist, I thought I’d start off this interview with something easy: Who is Anne Lyle?

Hmm – not sure that is an easy one! I’m a zoology graduate and former non-fiction production editor turned web developer; a technophile and all-round Mac geek who also loves history and languages. I’m an England cricket fan, a tolerably good cook and partial to a glass of single malt. None of this, apart from the love of history and languages, has anything to do with my fiction. Oh, well maybe the zoology, too. I love creating interesting non-humans for my stories.

Your first novel, The Alchemist of Souls, will be published by Angry Robot Books in April. It’s one of my most anticipated novels of 2012, but for those who haven’t heard of it, how would you introduce it to a new reader?

The Alchemist of Souls is the first instalment in an alternate history fantasy trilogy, set in an Elizabethan England where the Age of Discovery hasn’t turned out quite the way it did in our world. The conquistadors have been turned back by an alliance between the Native Americans and a powerful magical race known as skraylings, and the latter have recently formed an alliance with England against Spain. The hero of the series, Mal Catlyn, is a down-at-heel swordsman who is plucked almost literally from the gutter to act as bodyguard to the skrayling ambassador, and finds himself drawn into a conspiracy that could cost England her powerful new ally – and Mal his soul. 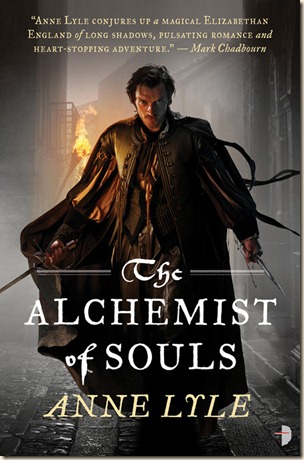 The inspiration comes from the depths of my twisted imagination – but also from extensive non-fiction reading. I’d read Jared

Diamond's Guns, Germs and Steel and was inspired to come up with a scenario that would have made it much harder for Europeans to conquer the New World, so that’s basically where the skraylings come from. The choice of Elizabethan London for the setting was based on my love of the period in general, and in particular my fascination with the Elizabethan secret service.

I guess through teachers at school. I remember one teacher reading The Magician’s Nephew by C.S. Lewis to the class (in the equivalent of third grade, I think), and then when I was a bit older I started gravitating towards the science fiction shelves in the local public library. Andre Norton was an early favourite, and James White’s Sector General stories - anything to do with aliens and xenobiology!

Well, it’s very enjoyable – I get to go to conventions and have a fun time with all my writer friends, and charge it as a business expense. :) As for specific working practices, I just write regularly. Not necessarily every day – sometimes life gets in the way - but it’s my number one priority after the basics like eating and sleeping!

I don’t recall having some great epiphany about “being an author” – I just always liked writing stories and gradually came to realise that I wanted to get published. My first foray was probably the script my best friend and I wrote for our favourite kids SF show – we got a lovely letter back from the production team, with signed photos of the cast. Best. Rejection. Ever.

I think there’s a lot of exciting stuff going on in fantasy in the 21st century. We’ve moved on a lot from the days when it was mostly love letters to Tolkien, and now the genre is a lot more varied – for one thing, it’s not all straight white guys any more!

I see my writing as fitting somewhere between the grim ‘n’ gritty fantasy of Martin, Abercrombie et al, and the more (for want of a better word) elegant historical fantasies of Ellen Kushner, Guy Gavriel Kay and Tim Powers. My publishers like to describe my book as “GRRM meets Shakespeare”, which is a hell of a comparison to live up to, but at the same time I can see where they’re coming from.

I’m currently working on the sequel, The Merchant of Dreams, and I have a third book, The Prince of Lies, in the pipeline. After that, who knows? I have a few ideas on the backburner, but nothing solid planned.

I’m reading The White Road by Lynn Flewelling. No non-fiction on the go at the moment (apart from snippets of research).

I once appeared in pantomime as a snowflake (I was about eight or nine).

My book coming out, obviously! Apart from that, the two big UK conventions of the year: Eastercon, which is the weekend after my book is published, and FantasyCon, because last year’s was brilliant.

The Alchemist of Souls is published by Angry Robot Books at the beginning of April 2012.