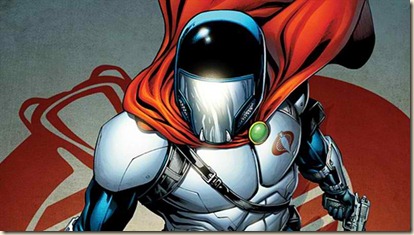 IDW’s line of G.I.Joe comics went through quite an important ‘event’ last year – the Cobra Civil War – and after reading the Cobra Annual 2012, I had catch up with the story.

I seem to have a knack for joining the continuity when something big happens involving Cobra Commander (my first comic was G.I.Joe Real American Hero #100, when he comes back from the dead).

[Huge thank you to Lorelei at IDW for providing me with the issues I was missing!]

I thought I’d break this review up into a loose chronological order, starting with the Death of Cobra Commander, followed by Cobra: Civil War, then Snake Eyes, and finally a couple of issues that focus on the aftermath, and the next story arc “Cobra Command”. The story rotates through the three G.I.Joe titles, but I haven’t managed to get hold of all the G.I.Joe series, so that will have to be reviewed at a later date.

The Death of Cobra Commander 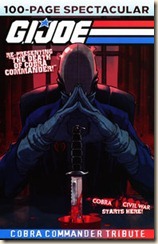 This issue is a 100 page commemorative issue that takes a look back at Cobra Commander through the ages. It starts off with his death, a story that perfectly portrays Cobra as a ruthless organisation built on and riddled with treachery, distrust, and paranoia, staffed by not a few sociopaths. And, hidden amongst them, is a “rogue” G.I.Joe officer, who’s been biding his time.

I thought this was a very nicely put together book – there’s a great story leading off, and a wealth of bonus material to please long-time fans of the franchise and also newcomers. For example, it includes a biography of Cobra Commander (in the form of a newspaper article); written responses from members of Cobra and G.I.Joe to news of Cobra Commanders death (most dry and serious, but a couple were funny). I particularly liked the reprints of the old comics (including the first G.I.Joe comic I ever read). The art and colouring style are simpler, a bit more garish, and hasn’t quite aged as well as hoped, but the old issues are still enjoyable to read and nicely composed. 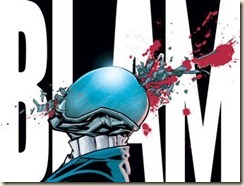 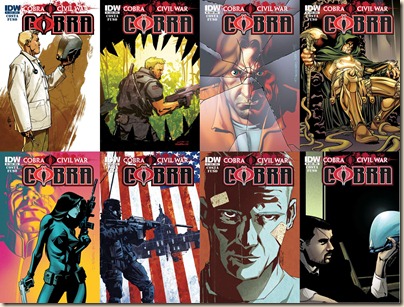 It’s quite engaging, watching the command candidates attack each other and compete for the top spot. It shines a light on the dysfunctions of Cobra as a paramilitary organisation. As mentioned in the Death of Cobra Commander review, above, this is an organisation populated by sociopaths and psychopaths – each an accomplished Machiavellian operator, attempting to twist every opportunity in their favour. We’re introduced to all the main candidates as the issues rotate in perspective, and see how their particular style might lead Cobra – from blunt violence, to subtlety and even economics. Certain candidates are aware that they have no chance whatsoever, so are just working for themselves, strengthening their positions in general in the organisation. They also exhibit an equal mix of arrogance and insecurity. In the meantime, Serpentor (a type of intelligence priest), is pulling strings in the background – manipulating Cobra candidates and also controlling a mole inside G.I.Joe. But other covert operatives are also in place, and starting to work at cross-purposes.

The Cobra characters offer a stark contrast to the G.I.Joes, who have a strong sense of brotherhood and trust cementing their ranks together. Knowledge of a Cobra plant amongst them leads them to a radical solution: task a former Cobra operative to root out the traitor. This forms a fair bit of the story, and is nicely done. That being said, some of the key “good” characters are not without their insecurities – as the Cobra-centric narratives start with “I’ll never be Cobra Commander…”, so too do the G.I.Joe-focused narratives start with “I’ll never be G.I.Joe…”. It’s a nice way to offer further parallels and similarities between these two otherwise diametrically opposite groups.

As mentioned above, the story also features in G.I.Joe (review to come at a later date) and Snake Eyes (reviewed below), and there are a fair number of references to what’s going on in the other titles. However, there’s no necessity to read all three, as important information is conveyed as and when needed. Costa has a very interesting writing style and approach – he is very good at striking a balance between levels of information: sometimes he’ll give us a lot, through dialogue, while at other times he utilises minimal-to-no dialogue for a page or more, allowing Fuso and Florean’s artwork to show us everything we need. I liked the balance, and thought it helped strengthen the story – giving it nuance and atmosphere. The more I read, the more invested I became in the fates of these characters (good and bad), even though I already knew who wins the contest ahead of time.

The artwork throughout is varied, given the number of artists who worked on the title. Some of it is not the sharpest – at times blocky – but with strong colouring and good shading, and some sketch-like qualities, it is nevertheless eye-catching, clear and distinctive.

If I had one complaint, it’s that the winner of the contest doesn’t actually feature in the Cobra title, except for the prequel #0 issue, and in #8 as Cobra Commander – we know nothing of who he is (although, the new focus he gives Cobra should be a clue). Therefore, I don’t know how or why he won over the others. I’ll really have to read G.I.Joe #1-8 to get the full story. 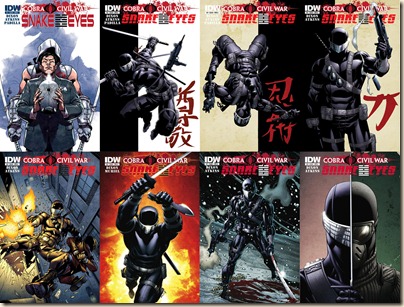 In the prequel issue, we learn that someone has decimated the Joe’s best fighters – members of Snake Eyes’ squad of warrior students. We then follow Snake Eyes as he hunts down the man who ordered his team killed. And that man is part of the Cobra Commander contest. The hunt takes Snake Eyes and his team to the Himalayas, and a hidden base cut into the side of a mountain. But Snake Eyes’ quiet thirst for vengeance gets the better of him, and things don’t go well for the team. We also come face to face with some long-time favourite bad-guys (who I actually remembered from almost twenty years ago). After the Himalayas, we move on to another mission, this one featuring a corrupt pharmaceuticals corporation with Cobra affiliations, who are spreading a virus that turns ordinary people into vicious, near-mindless psychopaths. The arc finishes with some rather poetic justice.

The tone is slightly different for this title, more thoughtful, with far more sneaking about, and plenty of ninja-action. So, naturally, I absolutely loved it. At the same time, there are a few amusing asides about Snake Eyes’ silence, as well as generally good banter between characters.

Right off the bat, I can say I much prefer the art style for Snake Eyes over Cobra. The art for the first four issues is much cleaner, with a very high level of detail. Each panel and frame looks meticulously drawn, coloured and inked, and the artists who have worked on these issues have given the story a very attractive, cinematic feel. There are some really great full-page pieces, too. The artist changes for the following four issues, but the style remains clean and detailed.

Overall, I would say this is a great comic. 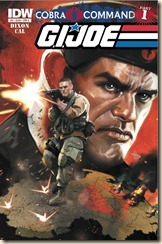 When Cobra Commander was killed by an undercover G.I. Joe agent, the Cobra council began a contest to find a new Commander. The rules were simple: whichever member of Cobra High Command caused the most damage to G.I. Joe would be elected the new leader of Cobra. At the end of the contest, the victor ascended to the role of Cobra Commander.

Meanwhile, G.I. Joe has been hit hard: they lost the Pit and had to find a new base of operations, their Washington, D.C. installation was
infiltrated by a Cobra double-agent, and Duke was almost eliminated by a deadly virus developed by a member of Cobra High Command. Now, Hawk must answer to his superiors in Washington in order to justify the catastrophic losses... but Cobra isn’t done yet.

The new Cobra Commander is asserting his position, moving forward aggressively with his plans. In the meantime, G.I.Joe commander Hawk comes up against Washington bureaucracy, who struggle to accept that Cobra exists – until Cobra Commander’s plan is executed. It’s an ingenious plan, really, one guaranteed to benefit Cobra while the Joes and the world scramble to figure out how (or even whether) they should react. There’s also an appearance from a character I’m surprised has featured in neither Snake Eyes or Cobra: Snake Eyes’ nemesis, Stormshadow!

The issue has great artwork – strong colouring, detail, and nice composition throughout. 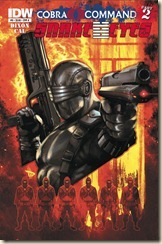 The new Cobra Commander has made his first move—an all-out invasion of the Southeast Asian nation of Nanzhao, a center of the worldwide drug trade. As the media’s eyes turn toward the attack, G.I. Joe — already gutted by Cobra forces during the Commander’s ascendency — move in to try and stop the invasion and determine Cobra’s goals.

Helix, Iceberg, Alpine and Snake Eyes board the transport along with Flint’s team, under special orders from Scarlett. Meanwhile, Cobra forces begin devastating Nanzhao’s opium fields, moving through the jungles with impunity…

This issue picks up right where G.I.Joe #9 finishes, as Snake Eyes and his team deploy to Nanzhao. They cut a bloody swathe through the cocky Cobra forces, in their attempt to figure out Cobra’s endgame. Like the other Snake Eyes issues, it’s very nicely composed and coloured, but I felt there wasn’t as much story in this issue as there was in past issues. Maybe it’s because the story now rotates through the three G.I.Joe titles properly that it might take a little while to get used to the new rhythm.

The story of Cobra’s Civil war also featured in the on-going G.I.Joe series, but I wasn’t able to get hold of two issues (#2 and #8) in time to do this review, so I will have to revisit that side of the story in a future post.

The first of these issues have now been collected into trade paperback editions:

Posted by Civilian Reader at 6:11 AM