Another varied selection, with a couple of continuing series as well as the starts of a few more. I must admit that I’m really starting to miss my DC and Marvel fixes every week. I’ll make sure to do a couple of catch-up reviews when I get back to New York, but in lieu of being able to review any DC, Marvel, Dark Horse, Image and Dynamite titles that might have caught my eye, this week also sees a new section to these Comics Round-Ups, and that’s a simple addendum that’s going to appear at the end, “Also Released This Week”. 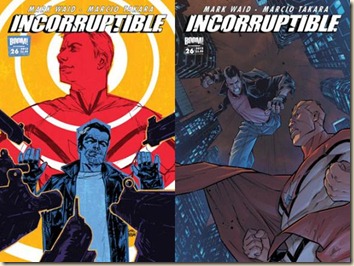 Don’t miss the final issue of the crossover event answering the question that’s been teased since the beginning of IRREDEEMBLE and INCORRUPTIBLE… how did The Plutonian and Max Damage become sworn enemies?

I love this series, just as I love Irredeemable, the other Waid title set in this world. In this issue, we see how Max got his powers (apparently, an inappropriately-dressed sexy nurse is part of every evil doctor’s staff…). It’s interesting to see how Max was perhaps the only person who thought something was off about the Plutonian – even taking Max’s sociopathic tendencies into account, his inability to believe anyone could be as good or self-controlled as the Plutonian proved ultimately, tragically correct. This was a very good issue, and shows Max had a little more depth even when he was a criminal. Really good. Highly recommended. 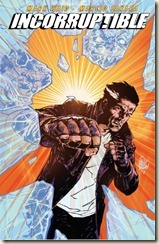 Incorruptible Volume 5 is also now available, and is another highly recommended collection. Here’s the synopsis:

A savage array of supervillains has overrun the barely-recovering Coalville and Max Damage struggles to find a way to rally the city. Meanwhile, his shaky alliances have become even more unstable, as Alana Patel, the Plutonian’s ex-girlfriend, continues her backdoor dealings with a shady businessman and Police Lt. Armadale finds that enforcing law in a post-Plutonian world can drive a man to the edge of sanity. Can Max find the last good man in Coalville to be the inspiration the city needs? Or will his past return to destroy the city’s last hope?

In this collection, we see Max’s working-relationship with Alana Patel, the Plutonian’s ex-girlfriend grow, as they attempt to get a handle on the situation in Coalville. The delicate state of affairs in the city are made worse by the arrival of a group of super-villains, who decide to make sport in the wounded city. We learn of one of Max’s unforgiveable crimes from his past, which causes more immediate problems as he tries to work with the powers in the city to appoint a moral leader to put the pieces of the city back together. Little does he know, certain forces have discovered his secret weakness; and a person from his past makes a short appearance to help out. On top of this, the women in his life continue to give Max a variety of headaches.

We also meet a new character who is going to play a bigger part in the story for a little while, Safeword – a woman with a great, very useful power, who seems to undergo a moral change much like Max’s. 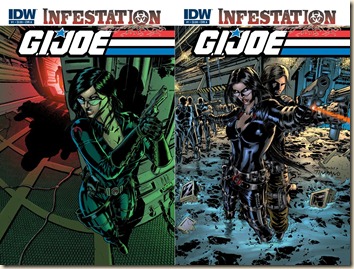 In a different dimension, a zombie hive-mind takes over the body of a covert vampiric soldier code-named Britt. Aiming to spread the zombie apocalypse to all dimensions using magically enhanced technology, Britt is able to open portals to four different dimensions before she is stopped. To what extent, and in what form, the Infestation has spread to these four dimensions

remains to be seen...

With the release this week of the introductory issue to IDW’s second Infestation event, I thought I’d get a little caught up with these. The G.I.Joe strand of this series seems to be a little different – rather than gribbly beasties, the Baroness, some Cobra Vipers and scientists, along with a captured Joe scientist, are confronted with a sentient, homicidal computer virus that takes over a Cobra installation and proceeds to kill… well, everybody it can. It’s an interesting conceit, and it’s nicely put together. I prefer the main G.I.Joe titles, but this was a pretty interesting diversion. 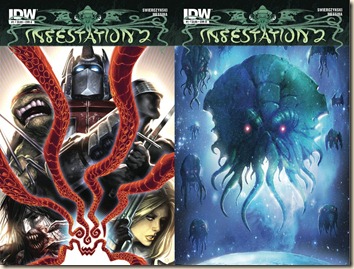 Last year’s ground-breaking Infestation series, IDW’s first-ever event, saw many teams from multiple universes fight off a zombie invasion. Now, an even bigger threat has risen to threaten the growing IDW multiverse: Lovecraftian demons threaten to reach across time and space and destroy everyone everywhere and everywhen! Also featuring Teenage Mutant Ninja Turtles, this framing issue presents a threat that perhaps not even TRANSFORMERS, G.I. JOEs, Danger Girl, and others can surmount!

So in this introductory issue, we get a broad-brush approach to this new infestation. There’s a rapid-fire round-robin through some of the characters that are going to feature in the cross-over Event, and see just how large the infestation is. And some wonderfully gribbly Lovecraftian monsters, so that’s an extra slice of awesome right there.

One thing this issue did do for me, however, was inform me of another of IDW’s comic series: CVO: Covert Vampire Operations, as some of their characters feature quite prominently in this issue. I haven’t been able to figure out if it’s still on-going, or if it’s sporadic, but I rather liked the idea. The characters presented here, I thought, were pretty interesting, so I’m going to see if I can get hold of the start of the series and find out if my interest is justified. I’m also a sucker for a lot of vampire-related things, and this seemed to have a bit of an Underworld vibe to it. Suits me. I shall hunt some of the issues or trade paperbacks down.

His name is Chuckles. He's the Joes' top undercover agent. And he's just infiltrated a top secret, highly organized terrorist organization... one the Joes aren't familiar with... one with a snake motif. As Chuckles is pulled deeper and deeper into the dark underbelly of Cobra, where one misstep means death, can he pull off the ultimate deception and bring them down from within?

So here I go with more G.I.Joe-related comics. Ever since I read the Cobra Civil War stuff, I’ve found my love of this franchise reawakened in a big way. I can’t seem to get enough of the Joes and their terrorist nemeses. So, after seeing this mini-series going cheap on Comixology (the first issue’s free!), I zipped through them. The series is darker than G.I.Joe, as Chuckles has to deal with having to whole-heartedly assume the persona of amoral mercenary. He’s put in some morally ambiguous situations, as well forced to make a couple of horrific choices. I think Costa and Gage have written a superb story, while Fuso and Kindzierski’s art and colouring is gritty and atmospheric – it really matches the tone of the story and enhances it in many ways. The four-part series ended on an interesting note, as I couldn’t figure out how they went from there to Chuckles’s ultimate victory which kicks of the latest round of G.I.Joe titles (Cobra Civil War and then Cobra Command). I guess I’ll just have to keep reading, won’t I?

The next in the story continuity is the first Cobra Special.

If you’ve ever liked the G.I.Joe franchise, you need to be reading the various comic titles. If you haven’t tried anything Joe-related, then I highly recommend you do. Great military/action stories, filled with great characters and solid storylines. 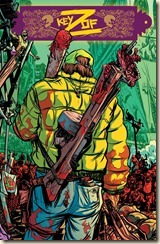 An epic, jaw-dropping finale! With the one man holding the key buried in chains, the two remaining human factions in zombie-filled New York City are ready for war. Will Ewing be able to escape his shackles and exact his revenge… or will a triumphant Lavoe finish what he started? All this in the pulse-pounding conclusion that redefines the zombie genre!

I really enjoyed the first three issues in this series, and have been eagerly awaiting this final issue. We rejoin Ewing in lock-up, after his ploy in issue three didn’t quite work out as he’d hoped. Eddie Alvarez, his young protégé (for want of a better word), makes the decision to join a side he believes in, rather than the side foisted on him by fate. As the tempers and tensions between the various criminal organisations now in charge of the New York Boroughs boils over, Ewing and Alvarez make their way to Rikers Island, to execute Ewing’s grand plan.

Echert and Sanchez bring the series to a great close, with some intense action, and some touching moments as well. Kuder’s artwork and Charlie Kirchoff’s colouring are great – very expressive and atmospheric, they bring the story to vivid life on the page. This is a great creative team, and I’m hoping they continue producing such good comics and stories. I’ll have to check out the Amory Wars series. Very highly recommended. 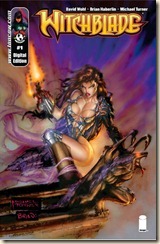 New York Police Officer Sara Pezzini is the bearer of  the Witchblade, a mysterious artifact that takes the form of a deadly and powerful gauntlet. This is the story of how she came to be the bearer.

This was an interesting read. I’ve seen Witchblade comics and collections on numerous occasions, but despite picking up the first trade paperback (which is only $4.99), I never got around to reading it. After seeing this first issue going for free on Comixology, I figured I really didn’t have any excuse to not give it a try. And, despite a few cliché cop thriller tropes, I really enjoyed this.

The first issue focuses on introducing us to the main character, the future wielder of the Witchblade: Sara Pezzini is a rule-breaking, gung-ho, and head-strong female cop of the NYPD. We get to know all about her character and skills when she goes after a drug dealer who is responsible for the death of a friend, and has somehow managed to beat the courts. She wasn’t invited to the operation, so she gets chewed-out by the precinct captain (who is basically her father-figure). Afterwards, her recklessness leads her to crash the Tournament, a competition held by one of New York’s crime bosses – the possessor of the Witchblade, but not its master (it won’t bond with him). Through the tournament, he hopes to discover the next wielder of the gauntlet, and then control that person. Little does he know, things aren’t going to turn out like he wanted.

This is a great intro to the series. I knew nothing about Witchblade except that it recently hit a milestone (issue #150), and that it was meant to be pretty good. As I said, I’ve already got the first collection, so I’ll be reviewing it pretty soon. If you fancy a taste of the series, check out this free issue on Comixology.

As mentioned in the introduction, this is the first time I’m including this feature. There are so many comics released each week, and for one reason or another I am not able to feature them all (much to my chagrin). I thought this feature might at least inform readers of some of the other titles being published that I think they may find of interest, especially new or “young” series and collected editions that it wouldn’t be too difficult (or expensive) to catch up on.

Marvel: Daredevil by Mark Waid Vol.1 (HC – really interested in trying this out, given how great I consider Waid’s writing to be)

Image: Marksman #5 (I’ll be putting together a review of all five issues currently available very soon)