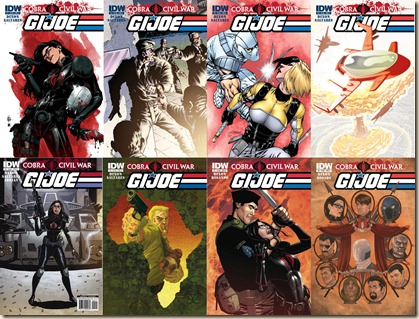 COBRA has lost its Commander. Fallen in battle to a G.I. JOE operative. Now, COBRA is out for blood. For JOE blood. Seven COBRA agents are now competing for the Commander spot by doing the most damage to G.I. JOE.

A COBRA agent infiltrated The Pit – G.I. JOE’s headquarters – disguised as General Hawk. A second COBRA agent – Storm Shadow – also infiltrated the The Pit. As the Joes tumbled to the infiltration, Zartan finished his mission, killing a captured Cobra Viper, but was caught himself during his escape. Storm Shadow remains on the loose, being tracked by Flint.

Meanwhile, in Washington, D.C., General Hawk and Dial-Tone are caught off from their G.I. JOE teammates and are on the run from a Cobra hit squad out to get them. Who ordered the hit is not yet known...

Here I review the third G.I. Joe series of comics that covered the Cobra Civil War. As far as I can tell, the story rotated through the three titles, but I was only just able to get hold of all of these issues. To summarise, this is another great title! It was also great to get the final pieces of the contest to become the new Cobra Commander. Really enjoyable.

It’s a difficult review to write, without offering loads of spoilers. Which is quite frustrating. Each issue is packed with story, and plenty of surprising events, and the pace is maintained throughout. After all, it’s open season on the Joes, and Cobra is far from a squeamish organisation. And the competition starts with quite the bang, as Cobra target the Joes’ headquarters, to devastating effect. G.I.Joe covers many of the Cobra candidates, without focussing too much on any specific character. It also features some of the more interesting Cobra operatives – the ninja Storm Shadow, and master infiltrator Zartan. One of the most important things, though, is that the G.I.Joe forces don’t know why Cobra has stepped up its attacks, and are left to scramble for safety. The contest for a new Commander is secret, much like Cobra itself – the Joes’ leadership comes up against official surprise and raised-eyebrows at their insistence that there is such a thing as an international terrorist, mega-crime-syndicate.

The Baroness seems to have an interesting role in the Cobra organisation, and therefore across the G.I.Joe-related series – she seems far more informed about the wider operations of the terrorist group than anyone else, and acts as administrator far better than any of the other candidates. She’s also the most interesting Cobra character, so I’m glad she crossed over into both this title and Cobra. She’s also involved in one of the many beatings the G.I.Joe forces receive from their enemies. Cobra seem to be one step ahead of General Hawk and his forces, at almost every stop along the way.

One thing I found quite interesting, was the fact that this title, and not Cobra, covered the victory of the eventual winner of the contest. Storm Shadow also plays a bigger part in this series, which I thought would have made more sense in Snake Eyes, given their shared history and obvious animosity for each other.

If I had one criticism, it’s in the characters of the G.I.Joes. They’re almost all too perfectly “good”, and therefore lack some much-needed nuance. They rarely bicker between themselves, and they are all so damned noble. Thankfully, Cobra’s in the picture, and they are all – with the exception of Snake Eyes’ team and Scarlett – far more interesting than the Joes. They are Machiavellian, they are ruthless, arrogant, and diverse. It would be nice if the Joes were made just that little bit less ‘good’ – if they had a little more of the less noble human qualities, I suppose.

The artwork is pretty strong throughout, with a high level of detail and sharpness for the most part, but still at times exhibiting a sketch-like approach, which ensures a not-too-polished visual – it’s also pretty good for portraying momentum. It really suits the story and tone of the comic very well. I also liked some of the artistic tricks Saltares and Rosado use to convey events without spelling them out. For example, in one scene, Beachhead drops a few grenades before taking cover with Roadblock behind a bank’s safe door. To indicate that the grenades have gone off, instead of some cartoon sound-effect written in comically large lettering, the focus of the frame is tweaked:

Overall, as with Cobra and Snake Eyes, I thought this was another entertaining and engaging comic title. Recommended for any fans of action, military and espionage fiction and comics, and if you can swing it, get all three of these series. In fact, I would go so far as to say that this should only be read with the other two titles as well – otherwise, there’s the chance it’ll appear as if the leadership contest was rather short.

Posted by Civilian Reader at 6:32 AM