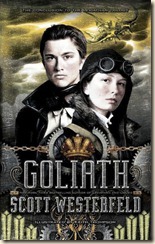 The exciting conclusion to the Leviathan Trilogy

Alek and Deryn are aboard the Leviathan when the ship is ordered to pick up an unusual passenger. This brilliant/maniacal inventor claims to have a weapon called Goliath that can end the war. But whose side is he really on?

While on their top-secret mission, Alek finally discovers Deryn’s deeply kept secret. Two, actually. Not only is Deryn a girl disguised as a guy... she has feelings for Alek.

The crown, true love with a commoner, and the destruction of a great city all hang on Alek’s next-and final-move.

I am a big fan of Scott Westerfeld, and have particularly enjoyed the Leviathan Trilogy (see my review of Behemoth, the second book in the trilogy, here). Goliath delivers on all of the promise of the first two books. It is a fast-paced adventure that takes us around the globe, filled with fantastic creatures and machines. The rest of the review will contain minor spoilers for the first two books, so if you haven’t already started this series, stop reading now, track down Leviathan and start there – the Leviathan Trilogy is well worth your time. 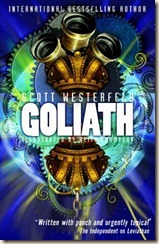 Goliath begins with Alek and Deryn newly returned to the Leviathan and re-adjusting to the structures and routines of the ship after the independence of Istanbul. Alek is becoming increasingly frustrated with the limitations he encounters as a foreign civilian on a military ship, and firmly believes he is destined to end the war, while Deryn struggles with her feelings for Alek and her fear of discovery, which could ruin her friendship with Alek, destroy her career, and disgrace the airship she considers her home. When the Leviathan picks up Nikola Tesla in what can only be described as mysterious circumstances, the stakes are raised for both characters.

Westerfeld does a masterful job of constructing his story: the pace is fast, with personal revelations and risks interweaving with events of broader import. He does not give us time to get bored. While I don’t know that I had an idea of how it would happen, the manner and timing of Alek’s discovery of Deryn’s secret surprised me in the best possible way, and worked very well to further the plot. Both Alek and Deryn have grown over the trilogy, and continue to do so: in order to get what they want, and even to survive, they will have to give up some of their illusions, and to consider new and different ways to pursue their dreams.

One of the great achievements of these novels is that they broaden our understanding of our own history, even as they create a new one: Alek and Deryn’s journey around the world shows them the hand of the war beyond the European fronts that readers are familiar with – this war is at work in Japan, Mexico, and the United States as well as Germany, France, and Russia, and Westerfeld enables us to reflect on its imperialist underpinnings as we marvel at the Darwinist beasties and Clanker machines. Westerfeld also reveals a dark side to all of these fascinating technological developments: a weapon of large-scale destruction becomes a realistic possibility thirty years earlier.

Goliath sees the return of most of the secondary characters from the first two novels, all of whom I love to read: Dr. Nora Barlow and Count Volger are great, as is Eddie Malone. Bovril and his fellow perspicacious lorises (is that the plural of ‘loris’?) remain some of the most endearing and delightful creatures I’ve encountered in fiction, and we get to see a lot more of them in this book. They bring humour and energy to every scene in which they appear, and Westerfeld distils wit and incisive observation into the very few words they speak. The lorises are mysterious beasties, and even at the end of the novel, I felt like there was much more to them than what I had seen. They are a brilliant creation on Westerfeld’s part. We also get appearances from William Hearst and Pancho Villa, which are a lot of fun.

Goliath also introduces us to some of the more unsettling fabrications of Westerfeld’s world. Through the Leviathan’s encounters with the other countries involved in the war, we see more of the Darwinist militaries. Up until this point, most of the fabrications we’ve encountered have tended towards gentle, even cute – such is not the case in this novel. The attack on an Austrian warship by Japanese Kappa is really unnerving, both for the reader and for Deryn and Alek. The Russian fighting bears are another of the scarier additions to this world’s menagerie, and provide a chilling example of what happens when humans lose control of fabricated creatures. Westerfeld’s imaginative work continues to impress – this world is detailed, nuanced, and completely immersive.

Keith Thompson’s art is particularly good in this volume of the trilogy, capturing the tone of scenes and characters perfectly, by turns playful, dramatic, and creepy. The two-page spread of the fighting bears gone feral in particular is beautiful and striking, and Thompson’s drawing of Bovril playing with Eddie Malone’s fake moustache is just delightful. The illustrations work perfectly to enhance and complement Westerfeld’s story. 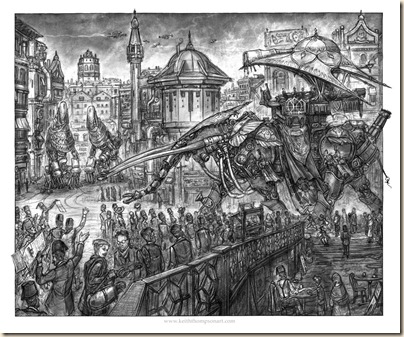 This is a fantastic conclusion the Leviathan Trilogy. Westerfeld has given his readers a brilliantly-imagined world and a story that lives up to it – this was a treat to read.