Announced today in a USA Today exclusive, DC Comics will be releasing six new titles this May. (I’ve borrowed some quotes and information from DC’s own announcement and the USA Today piece.) In order to make room for these new comics, six of the New 52 titles will be cancelled. Thankfully, and rather selfishly, I’m happy to report that none of the six titles to be cancelled were on my preferred list of comics.

Long-time readers will know that I’ve developed a bit of a passion for the DC New 52, having read, reviewed and loved rather a lot of them. For a full list, as well as links to my reviews, scroll down to the lower part of the blog’s Review Index.

The six new series will replace Blackhawks, Hawk & Dove, Men Of War, Mister Terrific, O.M.A.C. and Static Shock, all of which will conclude with their eighth issues, to be published in April. Of these, I’ve only read the first issue of Blackhawks (didn’t love it), and have read the first four issues of Men of War (again, didn’t love it). Apparently some of the characters from these cancelled titles will apparently make appearances in other, continuing New 52.

Here’s information and some thoughts on the second wave titles that will be starting in May: 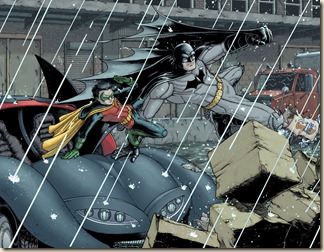 The acclaimed ongoing writer of ACTION COMICS, Grant Morrison, presents a fresh take on BATMAN INCORPORATED, in which the Batman brand is franchised globally in preparation for a major international threat.

I’m actually really looking forward to this. I am already reading all of the Batman-related New 52 titles, so one more – while it could be considered overkill – is automatically going to pique my interest. This one will pick up where the previous Batman Incorporated and Leviathan Strikes one-shot left off. There’s already an element of Batman Inc. apparent in the New 52, in that Batwing focuses on an African-based franchise. It’ll be interesting to see how it’s expanded in this new title.

For USA Today, Grant Morrison described this as a “big emotional story”, and focuses on Batman’s fight against Leviathan, and organisation led by Talia al Ghul, who – as I discovered in the New 52’s Batman & Robin – is Robin’s mother (a development I quite like, as this incarnation of Robin, also known 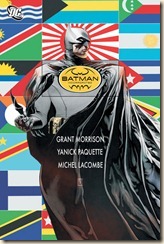 as Damian, is a bit of a sociopath). One thing that wasn’t clear was how long this title was meant to go on for, but Grant told the paper that he has a number of issues planned with which he’ll finish his Batman story, assuming “we survive the Mayan apocalypse”.

Batman Incorporated Vol.1 will be released as a deluxe edition hardcover (which will include the Leviathan one-shot) on April 11th 2012 – just in time for people to catch up with the story before the new series begins. I’ll do my best to review the book in as timely a fashion as possible.

The greatest heroes on a parallel Earth, the Justice Society combats threats that will set them on a collision course with other worlds.

Hmm… Parallel worlds… I must admit I’m not particularly keen on that type of premise, so I tend to take a very wary view of books that feature it. (This is, in part, because of All-Star Superman, which came across like a mess of dimension- and time-hopping that left this inexperienced and uneducated reader utterly confused, frustrated and uninterested.) Nevertheless, I’ll try out at least issue one – that way, I may understand roughly what’s going on, and be able to develop an appreciation for the plot device.

Stranded on our world from a parallel reality, Huntress and Power Girl struggle to find their way back to Earth 2. Perez and Maguire will be the artists on alternating story arcs. 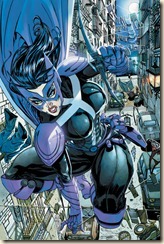 Huntress is currently enjoying a limited-run series (six issues – see image, right), so I’m not really sure why they want to re-boot her story again in this title – I’m waiting for the collected edition of that series, so maybe they’re going to end it in a way that doesn’t bring the Huntress’s story to a conclusion? I’ve never read any Power Girl, but it was recommended to me by someone whose opinion I trust, so I will probably give this a try.

With reference to Earth 2 and Worlds’ Finest, and the alternate-dimensional angle, DC Editor-in-Chief Bob Harass said “We thought it’d be a nice thing to bring this concept back and to really, as we did with the 52 initially, reconceive it and freshen it up.” I am, as has been made clear, on the fence about this…

The first ongoing series from acclaimed novelist China Miéville, this is a bold new take on a cult classic concept about the psychological effects on an everyman who accidentally gains powers to become a hero. 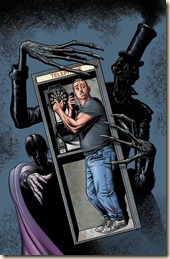 It’s written by China Miéville: at the very least, the first issue’s going to have a massive number of interested buyers – I admit, myself included. (I will not, however, camp outside a comic store or rush to one in order to pick up a copy – I’m far too dignified for that.)

There were some very quick posts about this news around the genre blogosphere (e.g. Mad Hatter and Gavreads), which wasn’t at all surprising. It certainly caught my attention as well. But, while I count The Scar as one of my favourite books ever, I have not been particularly floored by or fond of Miéville’s more recent novels, so tend to lack the exuberant anticipation that usually surrounds the announcement of a new Miéville novel. That’s not an indictment on his writing style (which is superb), I just tend not to like London-based fantasies, so The City & The City and Kraken didn’t appeal. His next novel, Railsea, could be interesting, though. I’ll have to give Embassytown a try at some point, too.

Back to the comic, though: I like the concept, so I’ll definitely want to pick up issue one, and I’m sure I’ll give it at least the Three Issue Test, if nothing else. In his interview with USA Today, Miéville said of his attachment to the series:

“I cannot believe that I get to just make up superheroes. It’s what you did as a kid… The whole point of Dial is that the roster of capes is changing every single month, often two or three times.”

Miéville has promised a darker series than in the past, with “horror, sci-fi and lots of psychological ramifications for its dialing protagonist”, and that some of the situations our protagonist will find himself in are “going to mess with [his] head”, which he would like to explore further. This does sound like a very interesting comic.

Featuring the return of a classic DC Comics series, THE WAR THAT TIME FORGOT, along with rotating back-up stories and creative teams – including THE UNKNOWN SOLDIER, with writers Justin Gray and Jimmy Palmiotti and artist Dan Panosian; and THE HAUNTED TANK, with writer John Arcudi and artist Scott Kolins.

I couldn’t find out much more information on this title other than the synopsis, above. To me, this sounds rather like DC wanted to get a slice of the G.I.Joe market, but considering it will be bringing back a number of older titles, that’s probably an unfair comment. Without knowing more, and without being familiar with the older titles it’s reviving, I don’t think I can comment any more on this. I might give it a try, though.

Spinning off from TEEN TITANS and SUPERBOY, this series finds four superpowered teens on the run and fighting against the organization that wants to turn them into supervillains.

Not really sure why this title is necessary. I’m not overly familiar with Teen Titans, having only read the first three in the New 52 series, and I’ve not read any of Superboy (I’m still not really sure of the wisdom of having Superboy a main character in Teen Titans at the same time as giving him his own series). This series will focus on four meta-human teens, attempting to avoid the attention of N.O.W.H.E.R.E. Which is the same premise as Teen Titans… The title suggests it might focus on less “good” teen superheroes, but I wouldn’t put money on it. If I’m honest, I’m not really that fussed about getting this one. Maybe if I could find a little more information on this one (and G.I. Combat, while I’m at it), I’d be able to make a more informed decision.

Overall, it seems like there are a couple here I’d be interested in trying, and since I’ve already given up on the two of the titles they're axing I’ve tried, this means I’ll have a couple more fun shiny comics to try out! I’m optimistic about a couple of them, cautiously so about a couple others. I will probably end up getting the first issue of all six new titles, just to give them a fair shake.

There are a few more new DC titles coming up (for example, Dan Abnett’s eight-part The New Deadwardians, coming in March 2012), and when I have some time and enough information, I’ll put together a post highlighting some of the most interesting and intriguing ones.