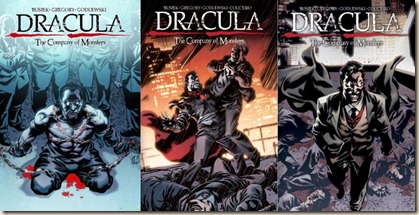 If you resurrect a Vampire King, you should expect to get bitten…

A powerful, predatory corporation acquires a valuable asset – Dracula! They think they own him, but no one can own the Son of the Dragon. There’s a monster in their midst that puts Hannibal Lecter to shame – and he plans to gain his freedom in blood.

Evan, a scion of the corporation finds himself caught in between his crazy uncle and his schemes, and Dracula’s calculating cruelty. As the forces of the corporation and Dracula draw battle-lines and face off against each other, Evan must enter into an unlikely alliance. Can Evan work to rally a rebellion that will be able to withstand the onslaught…?

Just a quick review of this series, which I stumbled across by accident. Regular readers will know I’m a fan of vampire fiction, and the premise for this series just really appealed to me. The books bring the Dracula myth kicking, screaming and biting into the modern day. It blends activist corporate agendas with the supernatural and undead, and examines man’s obsession with power, our tendency to greed, and the age-old quest for immortality.

The artwork is mostly clean and detailed, although on occasion it becomes sparse and rougher (depending on the artist handling the issue/chapter in question). The change in style is nicely deployed, and the transition was never jarring. In fact, I often didn’t notice a change in artist while reading – this had a lot to do with the writing and pacing, of course, but the two styles were also seamlessly integrated. I really like the way each of the characters has been realised – both main and peripheral members of the cast – and the colouring is superb, with the different palettes well chosen to match the mood and atmosphere of the scenes. It’s a very good looking series, although I admit that the artwork doesn’t have anything about it to make it particularly distinctive.

The story was really good – I sat down, started reading the first volume, and didn’t stop until I’d read all three collected editions (with only a break in the middle to eat). The story has a steady pace, and the dialogue is very fluid and natural. Evan and a few of the other core characters have good story arcs of their own, and develop nicely over the course of the series. It hooked me, for sure. There are shades of Supernatural and Buffy/Angel, but they are in the region of things that feature in a number of Dracula-/vampire-related literature, TV and movies.

Recommended for anyone who wants something a little different, and a new spin on one of the all-time classic mythologies.