I started my reviewing ‘career’ (for want of a better word) with music – rock and metal, to be exact. It is my other passion alongside reading, but after a few years of reviewing albums that progressively started sounding ever-more like cookie-cutter bands, one day I just decided to shut it all down. Record labels were informed that I would no longer accept review copies, and after catching up on what I’d already received, I would simply stop.

Roll on a couple years, and I find myself toying with the idea of getting back into it a little bit. There are fewer bands who come close to exciting my musical tastes, but 2011 proved to be a pretty stellar year for rock and metal music. Sure, the trend remains “heavier is better and hang the melody”, but there are a few bands still waving the standard for blending technical skill, melody, heaviness and originality.

So, I offer a rare, short music review, if you’ll indulge me… 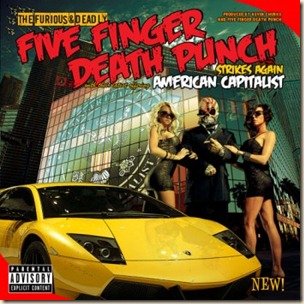 Five Finger Death Punch (5FDP) are an American hard rock-metal band, and with their third album, American Capitalist, they have hit their stride. The album’s an absolute beast! The band’s sound is muscular, polished, confident, and has a superb mix of melody and brutality.

Vocalist Ivan Moody I’m familiar with from his days in the short-lived Motograter (who I rather liked), but in 5FDP he’s found his place, and the band have grown into a superb metal act. With this third album, they are also finally displaying some of the huge potential they showed on also great Way of the Fist (2009) and War is the Answer (2010). The songs are better and tighter written, and much more focussed, and all of the band members have pulled off their best work to date, in my opinion.

Almost every song on this album could be a single – the band have penned 12 great cuts of crunchy, down-tuned guitars; pounding drums; throbbing bass; hooks aplenty; and powerful, harsh and clean vocals. It passed the goosebump test, certainly.

For me, guitars and vocals are very important (I always wanted to be both a guitar player and a vocalist, but sadly my abundance of enthusiasm was never sufficient to make up for my lack of skill). Guitarists Zoltan Bathory and Jason Hook provide some great, heavy riffs as well as intricate, clean solos, and are certainly among the better metal guitarists out there who do not subscribe to the need for excessive solos. But, for me, what really makes the album are Moody’s vocals, which are amazing. Able to belt it out with the best of them (in a strange, breathy roar) and provide smooth, passionate and deep melodies; he has a very distinctive singing voice.

The first single, “Under And Over It” (video below) is a good song, but it’s not my favourite on the album. It does form the middle of a great opening three-pronged gut-punch, bookended by the title track and “The Pride”. For me, though, the best section comes near the end of the record, when we get the three-song movement of “Remember Everything”, “Wicked Ways” and “If I Fall” – huge melodies, soaring choruses… they just really hit the spot.

The perfect amount of heavy, melody and get-up-and-mosh. If you’re a fan of heavy music with muscle, but prefer it with a little bit of commercial pop sheen, then American Capitalist could meet your needs.

“Under And Over It”