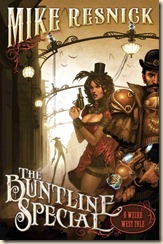 This is the Wild West like you’ve never read before. The undead drink in saloons, electric lights shine on the streets of Tombstone, and horseless stagecoaches protect passengers from the angry natives. It took me quite a while to get to this novel, for some reason. I’m a big fan of westerns, and Doc Holliday and Wyatt Earp are particular favourites. A Steampunk reimagining of the US Western Expansion era and the gunfight at the OK Corral? This was great fun.

Despite thoroughly enjoying this novel, it remains a difficult review to write. The story of the OK Corral is well-known, and Resnick does an exceptional job of weaving his new, Steampunk elements into the tale. They’re well-conceived, and it really does feels very seamless and natural that Edison and Buntline were in Tombstone, inventing cyborg prostitutes and other fantastical contraptions.

The characters – famous, infamous, and new – are very well drawn, and I particularly liked Doc Holliday. The banter between all of the characters is excellent and feels natural, and Resnick doesn’t resort to cliché or pulpy dialogue once. (It would have been nice to see at least one use of “varmint”, though…) The relationship and camaraderie between the Earp brothers, Doc and a couple of extra characters that are brought along for the ride, is very natural – there’s a tight bond, there, but it goes unspoken. They are taciturn bros, their friendship, trust, and loyalty do not need to be explicitly stated or reaffirmed. They take it as fact, and carry on.

I read The Buntline Special very quickly, and stayed up well into the night on two occasions. My quick reading notwithstanding, it should be stated that the novel has an overall gentle pace – not unlike what you imagine the characters to live at, given the Tombstone sun... It’s not lethargic, but nor is it in a rush to get to the end. It is a ‘comfortable’ read, but in the best way.

Some of the more fantastical additions to the story are interesting – for example, the way Native American/Apache curses and magic work in this Weird West. It’s particularly important when discussing Bat Masterson and Johnny Ringo, but I won’t say any more about them because I don’t want to spoil it for you.

One way to describe this novel would be “plenty of flair, but not much fanfare”. Resnick’s writing is tight and sparse – it really feels like there is no padding whatsoever to this story, and he writes in a stripped-down prose style. Along with the steady pace, the gunfights aren’t drawn out – they are over in seconds (or lines, if you will), which keeps things realistic and very well-paced. The steampunk stylings do not dominate the story, nor do they detract from the source material overly much.

Overall, this is a very fun and well-written novel. I look forward to diving into the second book in the series, Doctor & the Kid.

I read this book on my Kindle and I must say, Pyr have done another great job making it a top-quality product. Indeed, Pyr eBooks are usually some of the best-quality available on the market, with plenty of nice touches throughout, and maintaining any graphics from the physical books over into the electronic format. Here are a couple of the nice touches from Buntline Special. First, an example of the chapter headers: 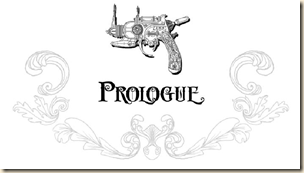 The book also a few full-page illustrations, of which this is an example (and the least spoilerific): 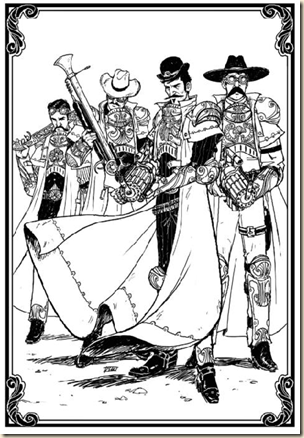