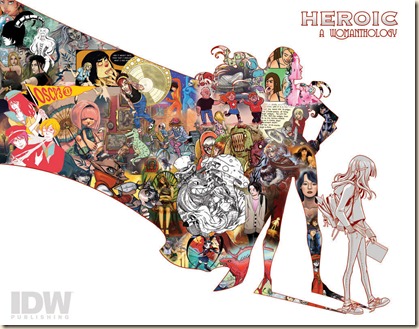 I don’t know a huge amount about this project, but I’ve seen it mentioned a couple of times, recently, so thought I’d give it a shout-out here. According to The Hathor Legacy, the project is a 300-page, full-colour, hardcover graphic novel written, drawn and designed solely by female comics creators. According to their Kickstarter page, the pitch is:

The purpose of the book is to show support for female creators in comics and media. There will be multiple short stories, “how to”s & interviews with professionals, and features showcasing iconic female comic creators that have passed, such as Nell Brinkley and Tarpe Mills. A Kids & Teens section will also be included, showcasing their work, and offering tips & tricks to help them prepare themselves for their future careers in comics. Overall, this is pretty much a huge book showcasing what women in comics have accomplished, and what we are capable of. :) We are also hoping that by doing this book, it will encourage a new generation of women to pick up the pencil and create!

New artists and authors will be paired up with established, big-names to help boost their profiles and promote their art and/or writing. More information about the artists and writers who are involved in the project can be found on the Womanthology website.

They managed to smash their funding target of $25,000, and have managed to raise a whopping $109,301! What’s doubly impressive is that many of the big-dollar pledge rewards were snapped up (where, for example, a donation of $65 will get you drawn into a panel, or $100 will get you a comic script review from a leading editor – that sort of thing). It shows a huge amount of support for the project, and raises the possibility of other projects like things being equally attractive and popular.

Here’s a screen-capture from the Womanthology Kickstarter page: 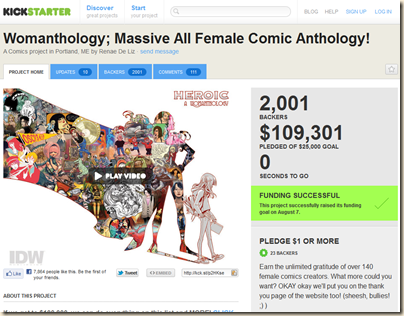 I think the idea of a crowd-funded comic project is pretty interesting, and when you factor in that the profits go to charity, this is a very worthy cause. In fact, it looks like 2012 might end up being the Year of Kickstarter (I first heard of it through Matt Forbeck’s “12 for ’12” challenge), as I’m hearing it mentioned ever more on blogs, Facebook and Twitter.

I’m not sure if this is still the case, given the amount of funds they managed to raise, but the original plan was to print 1,500 copies of the book – when the goal was $25,000. With four times that amount, I wonder if they’ll expand the print-run? Anyone know the answer to this? Couldn’t spot anything on either website.

Here’s the advert that you’ll find in some IDW comic books: 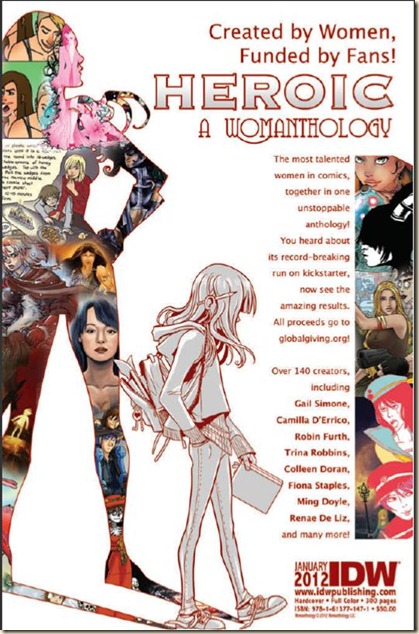