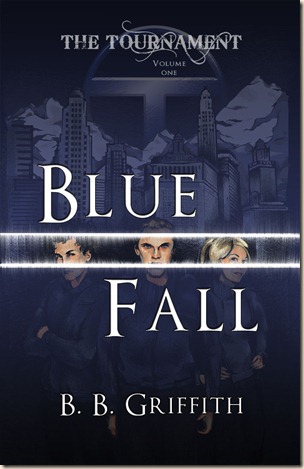 A few days ago, I got an email from author and small-press owner Brad Griffith, asking me if I might be interested in having a look at his latest novel, Blue Fall. It sounded pretty interesting, with a premise that ticked a few boxes in the ‘Of Interest’ column: it draws on the historical notion of wars or international conflict being fought between chosen champions; only in this time, it is underground and probably illegal (I’ll have to report back after I’ve read the novel). I hope to get to it in the near future, but in the meantime, I asked Brad if he’s be interested in writing a short piece on the nature of inspiration. He agreed, so here it is…

Where have all the Muses gone?

Old timers in the writing industry have a saying, it goes something like this: “A writer without inspiration is just a sack of meat with a pen.”

Ever heard that before? No? That’s because I just made it up. One might say I was inspired. Rest assured that when I’m an old timer I will be repeating it to anyone who will listen, when I’m not busy scowling at the ducks in City Park, that is.

Inspiration is a funny thing. It comes at strange times, and it disguises itself in many forms. Not unlike the common cold, or indigestion, although it is a good deal more beneficial. So beneficial, in fact, that it is the lifeblood of writing. So let’s break it down.

The Nature of Inspiration:

What is inspiration, really? Is it just a “great idea”? Not quite. I get a lot of great ideas. Just the other day I had this idea to modify my windshield washer to shoot directly over my car and right onto anyone that might be tailgating me, something like a car-powered squirt gun. Now that is a great idea, but it is hardly inspired. I heard of this other idea, too, which I wish I had thought of myself: you go out and get a parrot, and the only thing you train the parrot to say is “Help! They’ve turned me into a parrot!” Now that is a great idea. But is it really inspired? Nope.

Inspiration is deeper. Inspiration is less the unearthing of a new way of thinking than it is a breakthrough in the way of viewing the things we see every day. A hard truth of life, and of writing in particular, is that it’s all been done before. Whatever you’re thinking about, whatever plot idea is circling around your head, has already been hashed out before in some form or another. Hundreds of thousands of books are written yearly, so if you’re looking to write a totally untouched, completely original book, you’re out of luck. The good news is, there’s always a better way to tell a story.

How about this story line: An orphaned child with a mysterious background finds that they have special abilities and are destined to take on an evil power. Heard that one before? Only a million times. It’s the basic plot of Star Wars and Harry Potter and the Mistborn series and the His Dark Materials trilogy, and countless others. But nobody would call these books copies of each other. It’s because they are inspired. They take the old and make us see it in completely new ways.

The Timing of Inspiration:

Whenever someone is hit by inspiration they often say something like, “It came out of nowhere!” As if it was one of those strange, errant drops of moisture that falls on you while you walk around downtown. It’s commonly believed that inspiration comes randomly, willy-nilly. That your muse walks around with a blindfold on looking to pin the tail on the donkey, and if you’re lucky enough to get stuck in the ass then voila! You’ve got a novel now, buddy!

This is not true.

Although inspiration and creativity can hit in group settings, specifically in workshops and the like that are tailored for it, I’ve noticed it most often comes to me when nobody else is around. Other people have the habit of focusing your thoughts elsewhere, usually on them. But when you are alone, you don’t need to focus on anything, and that’s when the muse will stick you.

Music can be inspiring, yes, and so can other works of art like movies and plays [and books like Blue Fall, written by a handsome devil named B. B. Griffith, details below – end plug], but I’ve found that, in general, things come to me when all of the distractions of the world shut up for a bit. Perhaps this is why inspiration is so fleeting and can be rare; we’re bombarded with so much data all of the time that our lives have become big white noise machines. How are we expected to become inspired when we can’t hear ourselves think? Try unplugging for a bit. It does the body good.

So next time you need inspiration, why not take a walk, sit on a bench, and ponder your story. Then flip your story on its head and walk around it and try to catch it from a different angle. That muse will be tiptoeing your way in no time.

Brad Griffith runs Griffith Publishing, a small press based out of Denver, Colorado. He is also the author of Blue Fall, a conspiracy thriller with a strong sci-fi backbone, out now in both ebook and paperback from Griffith Publishing. More information on Blue Fall can be found on their website.

For further ramblings about writing and publishing, check out the Griffith Publishing blog.

Posted by Civilian Reader at 2:59 PM