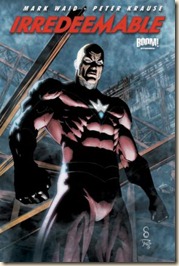 The Plutonian, once Earth’s most powerful hero, now Earth's most feared villain, has finally been captured. A ruthless alien race now holds Plutonian as their captive in a distant galaxy. But are they prepared to hold one of the universe's most dangerous men? And now that Plutonian is off-world, how will his former teammates, the Paradigm, deal with the worldwide clean-up?

Regular readers will know how much I’ve been loving the Irredeemable collections – it’s a great comic series, with a superb premise, that sets a very high standard. This volume finishes with Chapter 23, and even after two years, Irredeemable maintains a very high quality and remains gripping. If you’ve been following the series, you won’t be disappointed. Check out my review of the Definitive Collection (collecting volumes one to three) for more on the start of the series.

[Before I get on with the review – which contains minor spoilers: how cool is that cover? Well done Scott Clark & Dave Beaty!]

Cary, the powerful member of the Paradigm also known as “Survivor”, gets rather carried away after the news of the Plutonian’s capture goes public. He’s an interesting character, having become far more arrogant and assertive since the death of his twin brother. This is an interesting development – the most powerful remaining member of the Paradigm seems to be going bad as well – resorting to blackmail, threats, etc., to get his way – but unlike the Plutonian, who fell due to relentless disappointment, Survivor seems to be falling due to hubris. He’s a lot more aggressive in pursuing his newfound agenda of reconstruction, and isn’t afraid of twisting arms to get his way – and to bring super-powered villains into the fold to help with the clean-up. As a result, Survivor looks to be on a collision course with Qubit, who remains strangely reserved in the face of their victory, and above all disappointed that he wasn’t able to save the Plutonian.

In the meantime, the Plutonian was put in a fugue state for transport to a prison mine facility, but despite efforts to snap him out of it, he stubbornly refuses to do so. In his state, he has created an ideal reality for himself, but events in the real world start effecting his dreams, and threaten to knock him back into reality. Which could have dire consequences for his captors. A lot happens in his story in this volume, and it’s pretty varied (and at times a little odd), so I don’t want to spoil things. The collection finishes with a couple of very exciting cliffhangers and revelations about the Plutonian’s location, too. I’ll have to get to Volume Seven (the last collected book thus far) as soon as I can.

Yet again, this is a great collection. Mark Waid is a master, and Krause and Barreto do a wonderful job of illustrating and realising his story. Twenty-three issues in, Irredeemable is still engaging, entertaining, and superb.