Another varied selection of titles this week – a retelling of a classic story, the history of an iconic villain, three beginnings revisited, World War II action, 6th Century Amazons, and sentient robots!

As an aside, before I get into the reviews themselves; when I was a kid, my two favourite toys were G.I.Joe figures and Transformers, so two of this week’s titles have a pretty strong nostalgic draw. 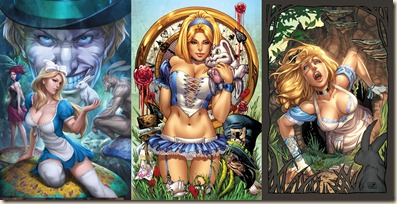 Decades ago, a girl named Alice was sacrificed into the horror-filled realm of Wonderland but her terrifying and awe-inspiring experiences there have been shrouded in mystery. The one thing known is that her time spent in a world full of insanity left her a broken adult. However, her courageous will to survive is what ultimately saved humanity. Now the story of Alice’s visit into Wonderland is fully revealed and the truth of the terror will be told in full.

This is delightfully twisted. Alice is trapped after going through the tree. Rather than escaping into the world of Wonderland with the White Rabbit, she is kept prisoner by the Jabberwocky. Until the White Rabbit returns, years later to free her, and finally take her into Wonderland… But this is not the story we’re familiar with, and things are far from safe – the Cheshire Cat is a vicious, hungry predator, for example – and Alice’s late introduction to the world begins with a frantic run for her life.

The artwork is great – from the mind-bending weirdness of Wonderland itself and its denizens, to the less surreal moments, the images are crisp and clean, and of the distinctive Zenescope style.

I really enjoyed this, and look forward to seeing how the series develops. I think I’ll have to get hold of Tales From Wonderland Volume 1, as well. This is a great idea, expertly  and vividly executed.

I’ve now read a couple Zenescope titles, and I must say I really like them – the art style, the general approach of what they’re doing with myths, legends and fairy tales really appeals to my tastes. Expect to see a lot more coverage on the blog in the future. 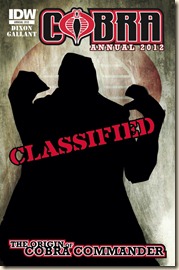 Cobra Commander Lives… But who is he? Following the astonishing events of Cobra Civil War, a new Commander has been chosen. Now witness the chain of events that led him to become the leader of the most powerful criminal organization  the world has ever seen. What demons drive him to commit the acts of terror in COBRA COMMAND?

G.I.Joe was the first comic series I ever read (not counting Peanuts and Garfield), so I was quite interested to read this – the story of how the new Cobra Commander became the master villain of the series. IDW published a mini-series covering the rise of the new Cobra leader from the ashes of a mini-civil war, as well as the death of the previous Commander (all of which I’ll review soon, in a single post).

In order to not provide any spoilers for the Cobra Civil War series, I’ll keep this very short: The comic throws a harsh spot-light on the brutality of life in some of the regions in the Golden Triangle (the largest source of drugs), and the underground crime syndicates of Asia. It’s an interesting story – I’m not sure what my 10yr-old self would have thought of this if I’d read it then. I certainly would have missed a lot of the nuance and background. Now, however, I can say I found this is a very satisfying read on a number of levels. Intelligent, grounded in good understanding of the darker parts of the world, and also human nature borne from horrific and brutal circumstances. If I had one complaint, it’s that the new Cobra Commander is a little too “perfectly sociopathic”, if you get my meaning? He’s a psychopath, with no feelings, which makes him a little one-dimensional. I’ll have to see how he’s depicted in the mini-series to get a better idea of how he comes across. 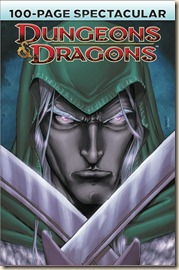 Discover the beginnings of three sagas in this 100-page collection! First, learn the truth about the dark elf Drizzt do’urden’s origins adapted from R.A. Salvatore’s New York Times bestselling novel Homeland. Follow that up with the first issues of the classic Advanced Dungeons & Dragons and Forgotten Realms series.

Advanced Dungeons & Dragons #1: If I’m honest, this hasn’t aged too well. I’ll get to the artwork below, but beyond a sense of nostalgia for the simpler times of comics, I didn’t really get much out of this first included issue. I can see what the appeal was – the writers ticket a lot of boxes with regards to game elements. It has the feel of an enthusiastic homage to the game. Also, “Churlish pup”? That was kinda funny. Much the same can be said for Forgotten Realms #1, in that reading it today seems more like an exercise in indulging nostalgia. There’s a better story to this one, but I wasn’t particularly hooked. With both of these issues, I have to confess that I’m not really a fan of the earlier comic art-style – the bright, solid colours gave the books a rather garish appearance.

The Legend of Drizzt – Homeland #1: Drizzt has been a character I’ve wanted to read about for a long time. While I’ve failed utterly to pick up any of the novels, this special issue offered a great opportunity to get to know a little bit about the character – it chronicles his birth and early years, as well as what makes him different to the rest of his race. The artwork is more modern and therefore more to my taste. It draws from an good assortment of “dark elf” colours (greys, purples, greens, deep blues, etc.), and is visually distinctive from most other comics I’ve read. It’s piqued my interest to read more about the dark elfs, so I may have to pick up a couple of Salvatore’s novels in the near future.

Overall, an interesting special issue, with some varied content. For me, though, it was the final part that was of most interest and most satisfying. 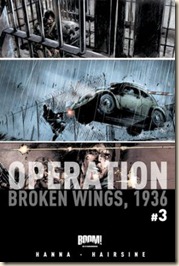 The epic conclusion! Major’s luck has run out as the German army has uncovered his intricate sabotage plot and imprisoned him in the dungeons of one of the Führer’s monstrous castles. Little do they know, everything is going according to plan, as Major’s ultimate goal lies at the heart of Castle Stolditz...

The first few pages are filled with various torture techniques Major’s subjected to at Castle Stolditz. All in the name of reaching his ultimate goal – the man in charge of the Castle. This issue brings the story to a brutal and bloody end, and it’s very nicely done. There’s not a whole lot of story in the issue, but it moves at a decent clip and you should zip through it.

The artwork is dark and gritty, and very nicely composed. The final page is a great piece of art in itself. This is a very good, three-issue series, set in a time not usually featured in comics. If you want some Second World War espionage and assassination, then this is a great option. 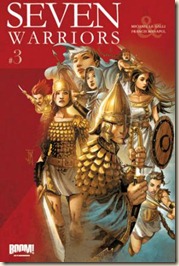 This short series finishes on an interesting note, as we learn the full extent of the Libyan King and Queen’s plan to ensure their bloodline lives on. As it turns out, the plan (which is highly objectionable and repugnant) was prescient, given what befalls the remaining members of our heroes. I’m not sure if the ending was entirely satisfying, actually. It was rather sudden and perhaps a little flat.

The writing’s good, and the artwork is vivid and colourful. The detail is not overly intricate, and many panels are pretty low-res, but it’s a visually nice comic nevertheless. If you read it altogether, you’ll get more out of the series, so now that all three issues are available I’d recommend checking it out. 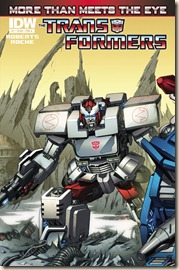 An all-new, on-going Transformers title reunites the fan-favorite creative team behind Last Stand of the Wreckers and sends the Transformers on an epic quest to the farthest reaches of the Transformers Universe and beyond! The adventure starts here!

As I mentioned above, I loved Transformers as a kid. However, save for the movies, I haven’t kept up with the franchise at all. I was therefore very interested to get back to it with this new title. There are a lot of references to previous Transformers’ titles, so I was a little adrift at times (which, being the OCD reader I am, always leaves me slightly annoyed). There are some characters who are clearly mad or suffering from some kind of stress or PTSD or something, which wasn’t explained. Nevertheless, this is a pretty good comic – the story seems to have promise, and I imagine fans of previous series will enjoy this. I like the idea of a mystery from Cybertron’s past featuring in the story – it has lots of potential.

There’s a nice, gentle sense of humour running through the issue, which bodes well for its future. I really like the phrase “rigor morphis” – that made me chuckle. It’s interesting to see the Transformers even more anthropomorphised than they are in the movies, too. Some readers might find the issue a little too wordy – it takes its time getting going and setting the story in place – but it wasn’t really a problem for me (I seem to rather like the “talkie” comics).

The artwork is interesting – it’s reminiscent of the early Transformers cartoons. Straightforward, rather than stylised, slightly less polished than some titles. It’s quite good, and adds to the nostalgic feel for the whole title.

As a complete newcomer to Transformers comics, I think it’s too soon to tell whether this is a keeper. Certainly it warrants checking out, and I’ll give it the Three Issue treatment to see how things develop.

Posted by Civilian Reader at 7:04 AM