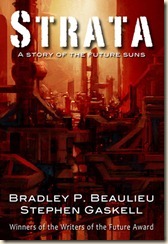 It’s the middle of the twenty-second century. Earth’s oil and gas reserves have been spent, but humankind’s thirst for energy remains unquenched. Vast solar mining platforms circle the upper atmosphere of the sun, drawing power lines up from the stellar interior and tight-beaming the energy back to Earth. For most of the platforms’ teeming masses, life is hard, cramped — and hot. Most dream of a return Earthside, but a two-way ticket wasn’t part of the benefits package, and a Sun-Earth trip doesn’t come cheap.

Kawe Ndechi is luckier than most. He’s a gifted rider — a skimmer pilot who races the surface of the sun’s convection zone — and he needs only two more wins before he lands a ticket home. The only trouble is, Kawe’s spent most of his life on the platforms. He’s seen the misery, and he’s not sure he’s the only one who deserves a chance at returning home.

That makes Smith Pouslon nervous. Smith once raced the tunnels of fire himself, but now he’s a handler, and his rider, Kawe, is proving anything but easy to handle. Kawe’s slipping deeper and deeper into the Movement, but Smith knows that’s a fool’s game. His own foray into the Movement cost him his racing career — and nearly his life — and he doesn’t want Kawe to throw everything away for a revolt that will never succeed.

One sun. Two men. The fate of a million souls.

In this novella, Beaulieu and Gaskell introduce us to a dystopian, corporate-dominated far future, in which workers struggle for their rights while slaving away on the energy harvesting platforms that orbit the Sun. With echoes of many of today’s political issues, Strata is an intelligent, well-written, and character-driven story of personal and political struggle.

Strata manages to pack quite a bit of action and tension into such a short amount of space. Presented from two perspectives – Poulson’s and Kawe’s, the authors offer us a glimpse into the brutal, soul-destroying lives of the workers on the Sun platforms. Contracted as indentured slaves, effectively, the working population of these platforms have few outlets or diversions. One of them is the racing, which mixes speed and danger in equal measures sure to excite the down-trodden workers of the platform and give them a momentary respite from the brutal, baking work conditions to which they are subjected daily.

Through the discussions between Poulson and Kawe, as well as the work of the Movement (an underground resistance to the official, corporate overlords), we learn more of the “extra-legal” status of these platforms around the sun and the illegal work conditions this allows, and the power of the corporations to change rules to suit their needs and profit-margins. The Movement are fighting for their rights against the corporations that seem to be winning “stunning” legal victories for even more perfect deals and so forth. It’s not difficult to spot parallels with today’s legal and political battles in the United States and elsewhere (but particularly Wisconsin – Beaulieu’s home state). I think the authors have taken the modern-day concerns and transposed them onto this speculative setting very well while not detracting from the character-story that is also at play here.

The authors draw on two classic character types, as well as their dynamic – the old, grizzled and cynical former freedom fighter, and the more radical and idealistic new generation activist. Rather than offer a retread of standard trope, however, they manage to make it their own in a way that feels both fresh and original. Poulson is clearly the father-figure Kawe always wanted and needed, and that comes with similar disappointments and confrontations that would imply. As we learn more of Kawe and Poulson’s situations and pasts, the reasons they are each drawn to the Movement and approach it the way they do become clearer. Poulson is suffering from memories and experiences of defeat in the past; while Kawe is idealistically taken in by the promise of a better life, and wishes to be an agent of change for the only life he’s ever known. Poulson’s cynicism has become pretty entrenched, and it’s almost as if he’s given up.

“Management cannot be stopped. Not by me, not by you, and not by your little friends.”

“The men in the offices? No, you’re right. But the platforms themselves... I couldn’t call them gods so much as machines – cold, relentless machines. And you and me? We’re just tiny cogs to be replaced when we get bent out of shape.”

As events take a turn for the deadly, Poulson becomes more paranoid, as he questions much of the good in his life, wondering if it’s all a lie, put in place to keep him quiet, distracted and docile. He also has to confront reality, and decide whether or not he should re-join the fight. Kawe, who spends most of the story looking up to Poulson, eventually becomes an inspiration for the older character.

It’s a classic “beware unfettered corporations” tale, transposed on a new and interesting setting. I’m sure this could have worked as a full-length novel, which would have allowed for greater fleshing out of the world. This, actually, is my only complaint about the novella – although, “wanting more” is hardly something to worry any author. With more space and time, I think more could have been made of Kawe and Poulson, their pasts and relationships with other characters. Nevertheless, this was still a satisfying story.

It’s a story of redemption, and it’s an examination of how far people will go for what they believe, and what they’re willing to sacrifice (in terms of personally and also, in one particularly chilling instance, collateral damage): “When your enemy was so ruthless, so casual in their regard for human life, you could only win if you rose to their level of brutality.”

Ultimately, Strata was a thought-provoking and engaging novella. Poulson and Kawe were great, well-drawn protagonists. I really hope Gaskell and Beaulieu can be convinced to write either more novellas in this world or even venture into novel-length territory.

This is a highly recommended, great-value novella.