A very nice and varied selection of new titles again this week. International terrorist syndicates, thrill-seeking female agents, a lost young lady in a bizarre world, frightfully British spies, and robots in disguise. I also catch up this week with a review I’ve keep forgetting to include – Josh Fialkov’s excellent Last of the Greats (issues one and two).

[Warning: There are some minor spoilers for G.I.Joe & Cobra readers.] 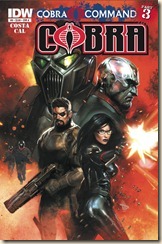 The new Cobra Commander has made his first move — all-out invasion of the Southeast Asian nation of Nanzhao, a center of the worldwide drug trade. As the media’s eyes turn toward the attack, G.I. Joe — already gutted by Cobra forces during the Commander’s ascendency — move in to try and stop the invasion and determine Cobra’s goals.

Helix, Iceberg, Alpine and Snake Eyes board the transport along with Flint’s team, under special orders from carlett. They discover a Cobra base, hidden by a jamming signal, emanating from a transmitter tower. Snake Eyes moves in to destroy the tower, and Helix follows. They elect to take the direct route.

“Combra Command” is shaping up to be quite an interesting new ‘event’ in the G.I.Joe storyline. The new leader of the international paramilitary crime syndicate is playing quite a long game, and it’s still not clear where his plans are leading – for Nanzhao and for the region at large. He is keep both the reader and the Joes guessing, as events throw up more confusion and curveballs.

The artwork is very eye-catching, with characters rendered more like portraits that comic-characters. It’s difficult to describe. Snake Eyes’ participation in story allows for some great images and action scenes. He seems to be casually walking away from quite a number of explosions he’s caused, in this issue… Major Bludd poses an excellent question: 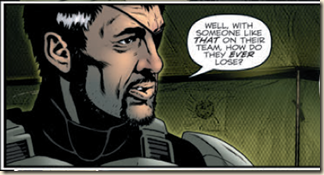 Overall, my affection for the G.I.Joe brand and various series just keeps growing with each new issue I read. Highly recommended. 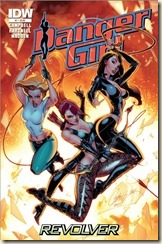 For the first time ever, creators J. Scott Campbell and Andy Hartnell introduce a new Danger Girl to the team! Who is she? What are her skills? Where is she from? What are her measurements? You'll find those answers and more as she joins the world's sexiest spy agency in their most explosive adventure yet! And not only that, but we also up the action and thrills by welcoming soon-to-be-superstar, artist Chris Madden to his first-ever Danger Girl epic! Consider yourself debriefed!

This was a blast to read. It’s a little silly, mixing James Bond, Charlie’s Angels and some great, humorous action. After a quick introductory mission, the Danger Girl team receive their new orders. Their destination? Peru! The issue is very much a laying-the-groundworks affair, but it does it with enough tongue-in-cheek and insouciant humour that it’s over before you have time to care about that sort of thing. There’s a bit of a bombshell at the end, too.

One thing, though: The new member of the team is not introduced in this issue. Seems a bit of a red-herring promoting the new member on the cover and in the synopsis, only for her not to appear…

The artwork is very colourful and bright, reminiscent of modern-day Disney, with a slight manga-inflection. A nice alternative.

A bit early to tell how this is going to shape up in the short-, medium- or long-term, but I’ll keep my eye out for issue two and report back. 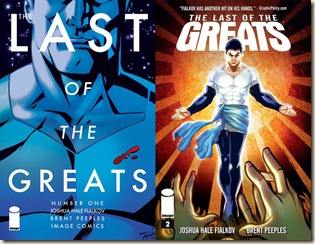 There were seven, possessing the power of gods, and representing all that could be right with the world. But now... he is the Last. As humanity stands on the brink of annihilation, he is our only hope. And he hates us for what we’ve done…

The apocalypse is stopped before it can start, and the Last has taken his place as ruler of Earth. His beneficent rule may not be all that it seems when his siblings’ sins begin to surface.

Fialkov throws us in at the beginning of the end – the Greats are all dead, save one. We join the story when a delegation has been sent to the Last’s stronghold, and he confronts them about his siblings, about the failures and weaknesses of humanity. The representatives – former guides of the now-dead greats – strike a bargain with the Last for help against an imminent threat to humanity’s existence. There are plenty of surprises along the way (some of them unpleasant). The Last is far more ruthless, callous and contemptuous of humanity than one would expect from a race of “saviours”, and his agenda is only slowly revealed to the reader.

This is a great title. It’s full of cynicism about humanity, concerned with how far we as a race are willing to go to survive, and how duplicitous we can be – but, instead of just preaching to the reader, the Last turns our worst traits back on us: a hunger for power, capacity for betrayal, and so forth. It’s a very well-written, intelligent comic.

Last of the Greats reminds me a little bit of Irredeemable, and if given time, it could easily come to rival Mark Waid’s series in stature and quality. Very highly recommended. [Issues 3 and 4 are already available.] 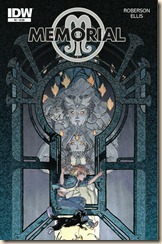 A year ago, Em found herself at a hospital with no memory, her mind a complete blank. After spending a year rebuilding her life, she is thrust into the middle of a supernatural conflict between immortal beings representing fundamental aspects of the universe itself when she is given the key to a magical shop, the kind that appears in an alley one instant and disappears the next. With nothing but a talking cat to guide her, she finds herself targeted by living statues, an evil ventriloquist’s doll, and the mysterious Court of Shadows…

I really liked the first issue of this series, so was very eager to read more. In issue two, we are still getting to know the worlds in which the story is set, as Em gets caught up by Schrodinger, the talking cat. We’re introduced to the different worlds (the Lands of Is, Was and Maybe). There’s a surreal, Alice In Wonderland-feel to some of this story, but it is – as far as I can tell – highly original as well, spinning a new approach to some of the more esoteric fairy tales and fantasies.

This is a wonderfully well-conceived and highly imaginative comic, with a strong flavour all its own. I really like the writing and art (which is clean and clear – and suits the story perfectly). I would really recommend this to fans of Locke & Key, Neil Gaiman, and Grimm Fairy Tales (the original stories and also Zenescope’s take on them). 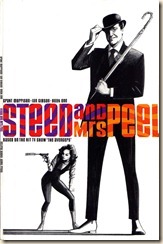 THE GOLDEN GAME Part One: “Crown and Anchor!”

Your favorite Avengers finally return! When Tara King is kidnapped by a mysterious organization, John Steed and Emma Peel must reunite to solve this new mystery.

The original British TV series The Avengers helped define the “Spy-Fi” genre: from January 1961 to May 1969, for 161 episodes, The Avengers was a staple of fandom; one of the longest-running hit espionage series alongside Mission: Impossible, and a small screen counterpart to that other famous United Kingdom spy, James Bond! A science-fiction/ spy fiction mash-up from Grant Morrison and two of TV’s most iconic heroes!

I should state right off the bat that I’ve never seen any of The Avengers TV show, and the 1998 movie was the first I ever walked out of. So, this series is starting from a pretty shaky position from the get-go. Nevertheless, I thought it was quite fun. The story has potential, and the artwork has something of a vintage feel to it. It took me a while to place Gibson’s style, but after a quick Googling, I realised it’s because he’s been involved with 2000AD for 35 years(!), including working on many titles that I enjoyed when I read the comic.

Steed & Mrs Peel is not my preferred type or genre of comic, but I think this could still have broad appeal for people looking for something a little different. And, of course, I have no doubt that fans of Grant Morrison will lap it up.

There’s mystery, espionage, a hidden antagonist, and some good fun thrown in. It’s also pleasantly British. A title to watch, this could shape up to be pretty cool. 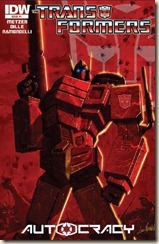 [I couldn’t find a publisher synopsis for this, which I thought was rather strange]

This is an interesting title. This first issue is a very short (eight pages) digital only comic, and it paints a harsher, grittier picture of the Transformer franchise.

The story follows a squad of Autobots on Cybertron, patrolling a region of the city Nyon, looking for a Decepticon arms dealer. All of the characters are recognisable: Bumblebee, Ironhide, for example, who alongside Prowl and Hound make up the unit. The leader of the unit, however, is “Orion Pax”, an Autobot who is identical to Optimus Prime… I’m not well-versed enough in the comics franchise to know what this means, or if this is pre-Prime days, but this character is far more ruthless and violent than the Optimus Prime I’m familiar with. It was an interesting change in dynamic.

The artwork is darker, and also some of the best I’ve seen connected to the Transformers’ franchise. It matches the different tone, and it quite striking. I’d be interested to see how this series shapes up. I certainly like what I’ve seen of this more than Transformers: More Than Meets the Eye. One to watch. 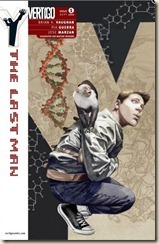 This is the saga of Yorick Brown – the only human survivor of a planet-wide plague that instantly kills every mammal with a Y-chromosome. Accompanied by his pet monkey, Yorick searches for his lost love… and the answer to why he’s the last man on Earth.

I tried this out because the first issue was free through Comixology, and after starting it I didn’t stop until I turned the final page. I was hooked. It’s a relatively gentle pace for this first issue, as we’re given the events of the 29 minutes before the event that killed off all-but-one male. I was hooked! This is expertly written, complemented by great, clear artwork. I have to find out what happens next!

Interestingly, there’s a mention of the Culper Ring, which also featured in Brad Meltzer’s The Inner Circle.

I know it’s a bit early to do so, but based on just this one issue, I would highly recommend this series to everyone looking for something different.