This latest thematic New 52 catch-up post looks at two team-related titles: Justice League and Teen Titans. I wasn’t familiar with either title from before reading these, and am only really familiar with the Justice League of America because it is a) a huge part of the DC Universe’s canon, and b) it was in Smallville. Nevertheless, the two titles caught my attention and I decided I wanted to give them a try. They are both quite similar in certain respects, and while they both have strengths and weaknesses, I think Justice League is the stronger of the two.

The New 52 Justice League caught my attention due to the synopsis, and the type of world/setting it described – a world unused to superheroes, which is suddenly filled with them? That just sounds great. Teen Titans I picked up because I’m really enjoying Scott Lobdell’s work on Red Hood & The Outlaws, so thought this could be good as well.

So there’s the background and reasoning, let’s get on with the reviews… 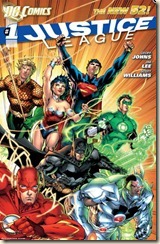 #1 – In a universe where super heroes are strange and new, Batman has discovered a dark evil that requires him to unite the World’s Greatest Heroes!

#2 – What happens when the World’s Greatest Detective takes on the world’s most powerful alien? You’ll find out when Batman and Superman throw down. Batman will need all his intellect, cunning and physical prowess to take on The Man of Steel.

#3 – The amazing Amazon, Wonder Woman, joins the battle against a bizarre threat! And the not-yet World’s Greatest Heroes need all the help they can get!

The story centres around some alien devices that have been scattered around to Earth, and the heroes are drawn together as they attempt to figure out what they are for and who sent them (we discover the answer at the end of issue two). As more civilians get caught in the action and frequent devastation, resentment and distrust of the superheroes grows. Events quickly spiral out of control, as the heroes learn to operate together, new members being added every issue, and the stakes are raised as the alien devices start to fulfil their purpose. Needless to say, the more heroes there are working on stopping this enemy the better. 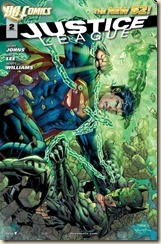 I quite like the fact that we’re getting a new perspective on the relationships between all of these superheroes. They know of each other, but don’t like or trust each other. There’s a lot of rivalry and bickering and plenty of snarky remarks. And, they’re also fighting an awful lot amongst themselves (see the cover of issue two, above). It doesn’t help that the rest of the population doesn’t trust them and actively fears some of them (which Batman thinks is kind of the point, in Gotham). It provides a whole new environment and dynamic for the heroes to deal with, and I think Johns has done a good job of writing it.

The characters themselves are familiar: Batman is headstrong, act-now-ask-questions-later; Superman is a little arrogant; Green Lantern is very confident in his abilities, and refers to himself in the third person a lot (is this normal?); Wonder Woman is very gung-ho; the Flash is along for the ride and clearly not at all interested in being a vigilante. Vic Stone, the future Cyborg, has a troubled relationship with his dad, who is quite an ass to his son in the first and second issues. We don’t really see the enemies they’re all fighting much, as for most of the time, they’re all getting to know each other (often at the end of a fist).

The artwork is great throughout, very vivid and colourful, and presented in a very clean and striking style. Issue two, in particular, has a couple of very impressive double-page spreads (featuring the initial fight between Batman and Green Lantern against Superman) that would make great posters.

Each issue comes with some extra bonus content at the back – from character- and page-design sheets, to “dossier”-style items related to characters we’ll meet in future issues. It’s nicely put together, and 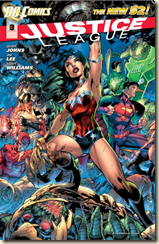 offers an extra bit of background and story to the whole. A great idea – pit it’s not really something featured in the other titles (although Action Comics does have some).

Justice League is a very fun title, and at least at the moment is more light-hearted than some of the other New 52. We have some great banter between the heroes – much of it coming from Green Lantern (who reminded me a lot of Ryan Reynolds’ portrayal of the character in the recent movie). The lighter tone works rather well, I think, and offers a nice contrast to some of the much darker (predominantly Batman-related) titles that have been included in the reboot.

I enjoyed this setting, as I think it offers and will continue to offer plenty of opportunity for some original story-telling. The dynamic of the still-growing new team is great – especially their incredulity that Batman is just a highly capable man, without super powers like them.

I’m looking forward to seeing what happens next. This was a lot of fun to read. 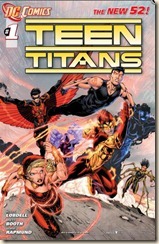 #1 – Tim Drake, Batman’s former sidekick, is back in action when an international organization seeks to capture, kill or co-opt super-powered teenagers.

As Red Robin, he’s going to have to team up with the mysterious and belligerent powerhouse thief known as Wonder Girl and the hyperactive speedster calling himself Kid Flash to stand any chance at all against a living, breathing weapon with roots in another world!

They – along with a few other tortured teen heroes – will be the Teen Titans.

#2 – A strange creature haunts the streets of Los Angeles… and because of this creature’s age, both Red Robin and N.O.W.H.E.R.E. are racing to find her – but neither side is prepared for the horror known as Bugg!

Meanwhile, Superboy is on a collision course with the team, and Kid Flash plots his escape from N.O.W.H.E.R.E. with the most unexpected of allies!

#3 – It had to happen! A new Teen Titan shows up without so much as an invitation – and here Red Robin already had his hands full trying to get Bugg from Los Angeles to New York by train! Don’t miss the dazzling debut of The Wall! Meanwhile, Kid Flash is trying desperately to flee the arctic N.O.W.H.E.R.E. prison with a mysterious young woman who is unable to control her own super powers. And Wonder Girl investigates a lead that is going to bring her face to face with a certain halfhuman/half-Kryptonian clone! 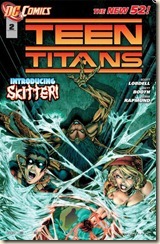 This, like Justice League, seems to take a more fun approach to the DCU. There are lots of quips and so forth, and there’s a generally much lighter tone to the writing and story.

The series opens with a huge mistake by Kid Flash, which pours fuel on the fire of distrust and contempt people feel towards the growing numbers of metahuman teens. As always, the fear of the unknown propels public opinion.

Red Robin (Tim Drake) is the nominal leader of the group, as he starts rounding up the team, tracking them ahead of the mysterious and nefarious N.O.W.H.E.R.E. organisation – which appears to be a supragovernmental group tasked with finding and neutralising metahumans (or pressing them into service). He rounds up Wonder Girl, Skitter and Bunker, while Kid Flash rescues Solstice (who has an intriguing, mysterious set of abilities that are yet to be fully explored). Skitter is a troubled character, suffering from a less covert change and abilities. Bunker is almost the exact opposite: fun, outgoing and more-or-less confident – a flamboyant South American still getting used to his powers, but already having designed himself an outfit and persona as a hero (of sorts).

Booth and Rapmund have a very nice art style; very clean and vivid, it reminds me of 1990s X-Men. There are plenty of striking full-page pieces, too. 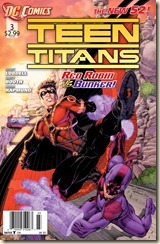 To be honest, not a lot happens in these three issues, although we do get some glimpse of another enemy who will no doubt appear later. There’s plenty of action, true, but we’re still very much in the recruitment stage, so overall plot movement hasn’t been too high on the agenda. It’ll be nice to see how the story develops as we move forward (which might start happening in the next issue), as I think the title has a lot of potential.

One other thing: the cover art is quite misleading, especially the third one. I don’t really know why DC does this, but there have been a few times when the cover of an issue suggests one thing, only for it to be a minor event in the issue, or a bit of a red herring. This bugs me a little. Just thought I’d share that.

While this is a lighter title, and despite its younger cast, Teen Titans doesn’t veer towards the childish, for which we can be very thankful. It’s not silly (like Wolverine & the X-Men turned out to be), and therefore should have a good chance of success.

Nevertheless, I think I’ll wait for the collected edition before I read any more.

So, that’s it for this round of New 52 Catch-Ups. Both of these two titles suffer from spending so much time recruiting new members to the respective teams, but on the whole show promise. If the pace of recruitment is picked up or finished in issue four, then Justice League especially and also Teen Titans could become very solid titles. Until we see a little more of the story, however, it’s too early to give a proper assessment of whether or not they should continue to be followed, let alone be considered top-tier titles.

There are still two more titles that I’ve got waiting to be read – Batwoman and Swamp Thing – which I’ll try to get done over the next week or so. I might put together a short post with some thoughts on all of the New 52 titles that I’ve read soon after that.

Posted by Civilian Reader at 6:30 AM