I shamelessly pinch this from A Dribble of Ink, who got it after Entertainment Weekly was given the exclusive (as well as an extract).

I loved The Great Bazaar, Brayan’s Gold and The Painted Man. As with many novels I have on my Kindle, I seem to keep forgetting about The Desert Spear, though. At the same time, that was a novel that came out and was not as eagerly embraced as the first by the fantasy blogosphere. So maybe I’ve been hesitant because of that?

Needless to say, with book three now on the horizon (it’s published February 2013 in both the UK and US), it seems like a good time to get my ass in gear. Here’s the very red cover: 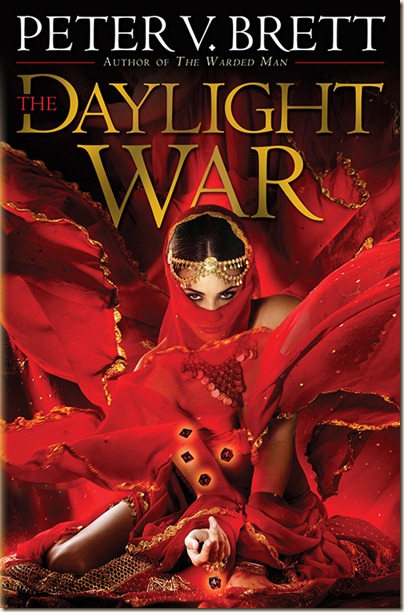 The one thing I don’t know, is if this is the cover for both the UK and US editions – certainly the American cover. When I saw early mock-ups (two versions, actually), they had chosen a blue palette. It was a very nice blue, I thought… The woman’s pose is way better in this version, and is certainly more suitable for Inevera.

Here is the rather long synopsis from Amazon.com:

On the night of the new moon, the demons rise in force, seeking the deaths of two men both of whom have the potential to become the fabled Deliverer, the man prophesied to reunite the scattered remnants of humanity in a final push to destroy the demon corelings once and for all.

Arlen Bales was once an ordinary man, but now he has become something more — the Warded Man, tattooed with eldritch wards so powerful they make him a match for any demon. Arlen denies he is the Deliverer at every turn, but the more he tries to be one with the common folk, the more fervently they believe. Many would follow him, but Arlen’s path threatens to lead him to a dark place he alone can travel to, and from which there may be no returning.

The only one with hope of keeping Arlen in the world of men, or joining him in his descent into the world of demons, is Renna Tanner, a fierce young woman in danger of losing herself to the power of demon magic.

Ahmann Jardir has forged the warlike desert tribes of Krasia into a demon-killing army and proclaimed himself Shar’Dama Ka, the Deliverer. He carries ancient weapons — a spear and a crown — that give credence to his claim, and already vast swaths of the green lands bow to his control.

But Jardir did not come to power on his own. His rise was engineered by his First Wife, Inevera, a cunning and powerful priestess whose formidable demon bone magic gives her the ability to glimpse the future. Inevera’s motives and past are shrouded in mystery, and even Jardir does not entirely trust her.

Once Arlen and Jardir were as close as brothers. Now they are the bitterest of rivals. As humanity’s enemies rise, the only two men capable of defeating them are divided against each other by the most deadly demons of all — those lurking in the human heart.

In more Peter V. Brett news, he has written another Red Sonja story! Picking up the story after Red Sonja Blue, Red Sonja Unchained is a four-part story (Blue was a one-shot). I rather enjoyed RSB, so I’m glad there is going to be more of the character from Peat. You can get a little more info from Brett’s blog-post about the series announcement. Some cover images for Red Sonja Unchained have been releasing… 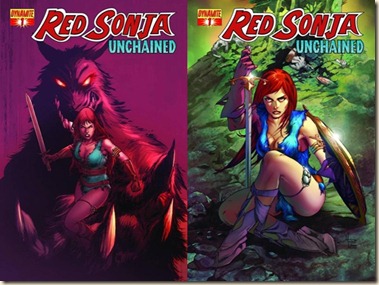