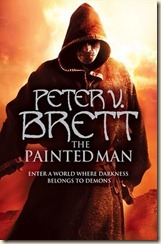 As darkness falls after sunset, the corelings rise – demons who possess supernatural powers and burn with a consuming hatred of humanity. For hundreds of years the demons have terrorized the night, slowly culling the human herd that shelters behind magical wards – symbols of power whose origins are lost in myth and whose protection is terrifyingly fragile. It was not always this way. Once, men and women battled the corelings on equal terms, but those days are gone. Night by night the demons grow stronger, while human numbers dwindle under their relentless assault.

Now, with hope for the future fading, three young survivors of vicious demon attacks will dare the impossible, stepping beyond the crumbling safety of the wards to risk everything in a desperate quest to regain the secrets of the past. Together, they will stand against the night.

It took me quite a while to get around to this novel. If I’m honest, I have no idea why. I think it just came out when I already had a lot on my plate and so it got pushed down the TBR pile. Now that I’ve read it, I wish I hadn’t waited so long. The Painted Man is immersive, engaging, and brilliantly written. Outstanding, I loved it. [The novel is The Warded Man in the US.]

There are three main characters at the centre of this novel, from different hamlets spread around the dangerous wilderness of this world: Arlen, Leesha and Rojer. The novel starts with all three as children (Rojer the youngest by quite a few years). Through their different experiences and a number of tragedies, they eventually are drawn together to fight back. They bond over a shared sense of survivors’ guilt and a desire to do something.

Every night, the demons emerge from the Core, and the human inhabitants of the regions beyond the various city walls cower behind magically-warded homes. The first few chapters have some great, tense night scenes: we get a real sense of the suspense and terror of the humans as they cower, praying for the dawn, and their panic as they rush to batten down the hatches at dusk. Every night brings new corpses and tragedy.

The young Arlen is very well-drawn – from his first taste of alcohol, not ‘getting’ adult jokes, playing “kissy” with a girl and “rather liking it”, his incomprehension about why people won’t fight back against the demons. It’s nice to see a child character that is written neither like an imbecile or an adult. Although, that being said, we see that Arlen is more brave and thoughtful than some adults – it comes from a naïveté, true, but still from the heart. He’s a nuanced and complex character, torn between the attractions of a ‘normal’ life, and his burning desire to take the fight to the demons. As he gets older, he makes discoveries that could tip the balance in the war forever. At the same time, he becomes harder, tougher, more driven and single-minded and starts, he thinks, to lose some of his humanity. I found his journey the most compelling. Through Arlen’s story we also get a great introduction to a number of regions of the world, as he travels to far-flung regions in his quest to learn as much as he can about warding.

Leesha’s hamlet is a hive of gossip, back-biting and hypocrisy. Through her, we learn of society’s expectations of women. Naturally, Leesha isn’t too happy about it, and as time passes she manages to break away from a preordained future. Through Leesha’s eyes, we also meet one of my favourite characters, Bruna – the hamlet’s healer. She’s an ancient crone who instils respect and fear in equal measure from her constituents. Leesha’s mother is a domineering harridan, jealous of Leesha’s youth and angry at her lot in life. It is not a happy home (something she shares with Arlen), and it helps explain a lot of Leesha’s choices throughout the novel.

Rojer, the youngest of our three heroes, has a particularly difficult and tragic introduction to the reader. His family is the victim of a particularly savage demon attack, and he is saved by a travelling jongleurs who takes him under his wing. He overcomes some difficulties to make a name for himself, as well as accidentally stumbling across a strange power over the demons.

There’s a lot going on in The Painted Man. The social commentary (on religion, social mores, family, expectations, and so forth) is woven perfectly into the story, and is neither preachy or heavy-handed. This is a tough world, nowhere near as enlightened as our own, let alone as enlightened as we wish the real world were. The place of women in the various societies is well-portrayed – they retain a power over their men in most of them – turning even the most disciplined into a posturing teenager (take, for example, the encounter involving Leesha, Marick and Gared). In the desert society, they are less than second class citizens – imagine every possible oppressive policy a nation could impose on women, and they have it. On the whole, and this is a real strength of The Painted Man, all the female characters are strong and well-drawn.

There are a lot of names dropped on us to begin with, but we quickly become comfortable and start sinking into the narrative and the story Brett’s telling us. It’s a wonderfully-realised world, and the fact that the characters are so well-constructed and -written just makes it feel all the more real. Every character feels fully-formed, even if they are peripheral to the overall story. They have their own quirks and idiosyncrasies, their own voices. It’s really quite impressive.

While it’s not immediately clear where the novel’s going, the more you read the more you realise how well the story’s been woven together. Every time I started reading, I quickly sunk into the story, whisked along by Brett’s prose, characters, and the world and society he’s created. I was in that rare position of wanting to read it as quickly as possible but also savour every page and word. Brett has a rare talent for prose and composition that places him firmly in the upper echelons of fantasy authors. I read the last 240 pages in one sitting, well into the night and early morning. It was utterly gripping, and I just couldn’t put it down as all the threads of the story were woven together into a great final battle.

I have already picked up The Desert Spear and The Great Bazaar & Brayan’s Gold (a pair of short stories set in the world) for my Kindle, and will be reading them hopefully very soon. Despite the slightly slow start, this is a great, expertly crafted novel.

Very highly recommended. This is superb.

Posted by Civilian Reader at 5:42 AM