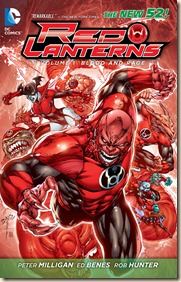 The Green Lantern Corps have existed for millennia, using the power of their will to protect the Universe. But the Red Lantern Corps, bearers of the red rings of rage, are much newer, and their mission far more destructive. The deadly alien known as Atrocitus formed the Red Lanterns to take revenge on the evil Guardian Krona, who was responsible for the death of his family and his world. But now Krona is dead, and mindless rage is all the Red Lanterns have left.

This is one of those series I waited for a long time before trying. I read the #0 issue, and thought it showed a lot of promise, so I picked up this first book. I still don’t think I really ‘got’ all of it, but it’s certainly an interesting title, and I think it has a lot of potential. It’s also made me want to try out all of the other Green Lantern-related series… So, as I’ve already got my hands on a copy of Green Lantern Corps, expect some more Lantern reviews to start appearing in the near future. Red Lanterns is pretty dark, well-written, and was a very enjoyable read.

The book starts off with Atrocitus rescuing… well, what appears to be an evil Red Lantern cat… That spews burning blood/fire… 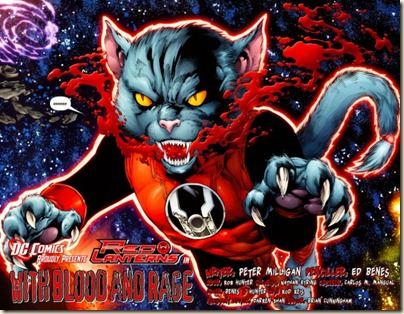 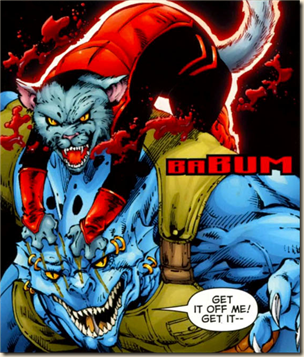 Evil Space-Cat Ready to Claw Out Your Eyes

The Red Lanterns are very different to the Green Lanterns, and also the Yellow Lantern mentioned in the Ryan Reynolds movie (which, despite some issues with random, clunky exposition, wasn’t as bad a movie as many thought it was). Their power comes from rage, and Atrocitus (great name) was the first, the one who fashioned the Red Lantern power source in the first place, and has been recruiting new members for his army ever since. The main problem, it seems, is that once they get their Red Power Rings, they lose a lot of their mental faculties as the rage takes over almost completely. 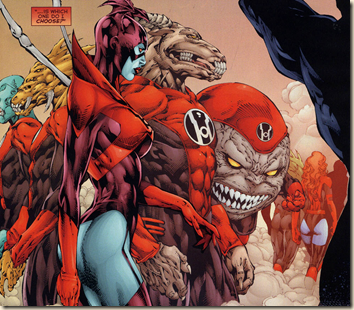 A selection of the Rage-Filled Lanterns

In a universe where so many cry out in anger seeking vengeance, Atrocitus recognises that the Red Lantern Corps has a new purpose: they must become the instruments of justice and retribution for those who have experienced the same pain that Atrocitus felt, when his family was wiped out by (possibly) rogue peacekeepers in the employ of the Guardians of the Galaxy (this is presented in brief in the chapters included in this book, but in more depth in #0).

In order to forge a more capable and effective force, Atrocitus must give his Red Lanterns back their minds. Which requires dunking them in an enormous lake of blood (below). This leads him to start slowly picking out the ones that seem to exhibit more control as it is, which allows the creative team to give readers a bit more background on a select few who will (and do) become more central to the story. This is not the fastest paced collection, but I actually thought that was perfectly ok – as a complete newbie to this section of the DC Universe, I liked that Milligan and company give us plenty of background, offering up the motivations for a select few Red Lanterns. It also explains why we get a slow-drip story about the first human Red Lantern (which was very well done indeed).

At the end of the book, I still didn’t understand how a cat becomes a Red Lantern...

I really like the premise of this series – the polar opposite to the Green Lanterns, these guys are rage-filled, animalistic killers. Bleez, the female Red Lantern whose rage came from abuse and mutilation at the hands of a Sinestro Corps Lantern, has designs on leadership, and she’s spent time forming bonds with some of the other Red Lanterns – it would seem, even when in her mindless rage-state, she had the presence of mind to lobby for support... And could present a serious challenge to Atrocitus in the future. 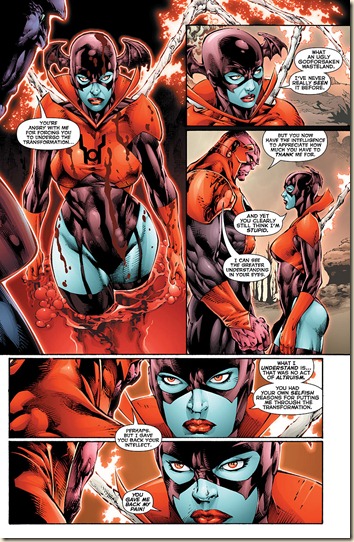 The story is quite introspective – Atrocitus is attempting to figure out the meaning of the Red Lantern Corps, his place within it, and also his overall motivation. He gained a measure of retribution for the death of his family. What now? With the fire of his rage diminished, he worries his purpose has fled with it, and he seeks to understand this as well as the greater purpose of his Lanterns.

Jack Moore, the human Red Lantern-to-be’s story is interspersed throughout the first few chapters, and I wondered how it would be incorporated into the Red Lantern story. It’s very well done, as it gradually becomes apparent what’s going to happen. I can’t wait to get my hands on Volume 2, to see how his arrival among the Red Lanterns shakes things up even more. (I’ve decided I’m going to stick to the collected books with this series.)

Overall, this is very good, and is definitely recommended. 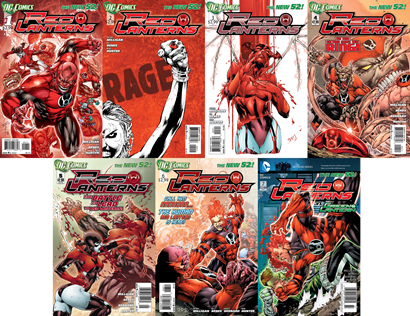 Posted by Civilian Reader at 3:50 AM