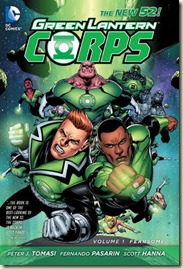 Guy Gardner and John Stewart lead a squadron of Green Lanterns to fight a mysterious force that is marching across the space sectors and devouring not only their natural resources but their entire populations!

On a mission to rescue John Stewart and Vandor, Guy Gardner assembles the nastiest Green Lanterns to ever put on a ring!

Peter J. Tomasi is also writing one of my favourite of DC’s New 52 titles: Batman & Robin. On the strength of that series, I decided to try out the zero issue for Green Lantern Corps. I enjoyed that, so when this book came out, I figured I’d give it a try. I’m still relatively new to the Green Lantern mythos, but the more I read the more I enjoy. This book was a fun read, but it didn’t quite rise to my expectations. The second half of the book, however, taps into the emotional darkness Tomasi is very good at writing.

In this first story-arc, someone or something is killing Green Lanterns, and taking ring-fingers as trophies. At the same time, probably the same sinister force is stealing natural resources from other planets. With an army of ninjas.

The dialogue is sometimes a little cheesy, but in a fun way that can be explained away as a fondness for classic comic-style dialogue. On good example, below, if when the two human Lanterns combine their power in a most melodramatic way: 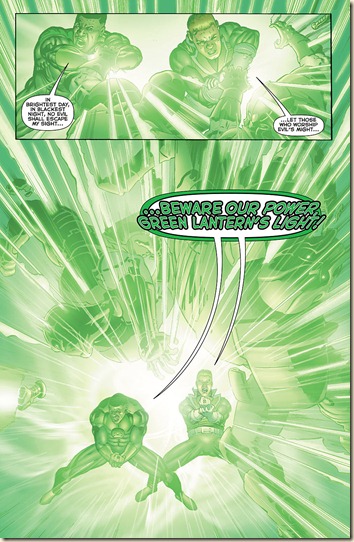 This is not an uncommon amount of green on a given page… Brace yourself.

The book can seem incredibly bright at times (yes, and it’s predominantly green), but the artwork is nice and clean throughout. There are, however, some pretty dark moments, which offer up some great contrast.

The final chapter is very moving, as Lantern John Stewart has to confront a painful decision he made while in the field. It’s a very good end to the book, and it’s in these emotional moments when Tomasi’s in his element. It’s an excellent ending to the book, and really made me want to read more of the series (after a slightly lackluster beginning). I quite liked the Lanterns Guy Gardner recruited for the rescue mission, as they seemed a little less pure than one my usually expect a Lantern to be (they were not, however, the “nastiest” I could imagine…): 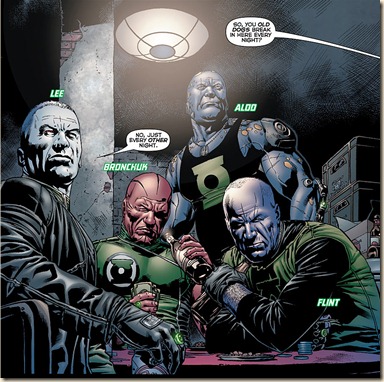 The author’s work on Batman & Robin is better, in my opinion. That being said, I have an obvious love for and bias towards all things Batman-related, so... Yeah. The “Fearsome” storyline is solid, though, and if you’re after some over-the-top Green Lantern action, then this book should certainly appeal. It is also not without a number of arresting moments, though: 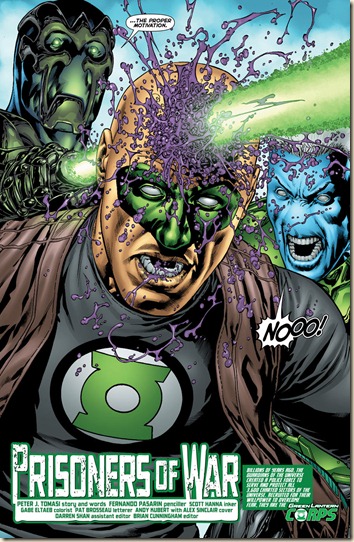 This isn’t the most shocking moment. Though it was certainly unexpected.

Would I recommend Green Lantern Corps broadly? Yes, I think I probably would. It is certainly more suited to those who are already tapped into the Green Lantern mythos and overall story, not to mention those more open to exaggerated, space-opera-esque comic action. The more I read set in the extended Green Lantern range of titles, the more I like it. I’ll have to make sure I give Green Lantern and New Guardians a try in the near future.

So, to sum up: The second half of the book, as already mentioned, is stronger than the first, and it certainly left me wanting more. The story is over-the-top and brash. The artwork is very good throughout. And, most important of all, it was a fun read. I think this will, however, remain a series I’m most likely to read only as-and-when the collections are made available. (Which is pretty much the case with all of them, now.) 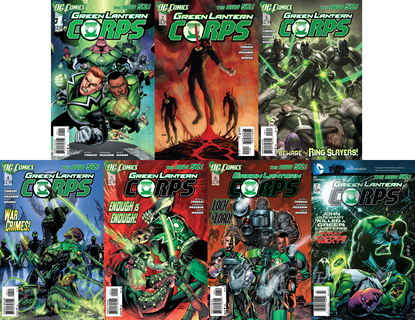