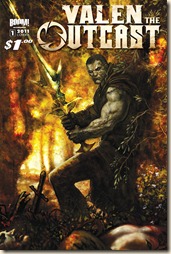 The King is dead – long live the DEAD KING! King Valen Brand is a fair, just king as well as a great and mighty warrior. Killed by a Necromancer in battle and resurrected as one of the walking dead. Now he’s considered an abomination in his own realm, an outcast with only one purpose: to restore his lost soul.

There has been a fair bit of buzz surrounding this new comic series, so I’m happy to be able to bring you an early review, before the issue hits shelves. Written by a fantasy-comic veteran (Robert E Howard’s Hawks of Outremer, Hexed, 28 Days Later), Valen the Outcast offers readers everything they could want from a bloody fantasy tale of revenge. Thankfully, the hype and wait have been well worth it – this has considerable promise and is a fun, dark read. Really great for fans of fantasy who want something more in comics.

There’s a strong cast of characters that come into Valen’s orbit after his untimely death. Zjanna, the necromancer, provides favours for the former king but is losing patience with his continued brusque treatment of her. A master swordswoman, she has wicked fighting skills beyond her magics. She is easily my favourite character. Alexio Cordovan, the rogue, is quick-witted and not prone to courtesy around the once-and-past-king. Valen himself is also interesting – looking to save his soul, butting up against the society that reviles everything he is (not to mention a few of his own laws). His is an interesting situation that offers an original approach to issues of bigotry and racism (life-ism?).

The first issue throws us right into the action – first at Valen’s death, though we don’t spend much time learning about his transformation (makes a nice change, I suppose); then the action barely lets up as Valen faces off against his former brothers-in-arms, and Zjanna is attacked by the necromancer’s forces. The final page was a surprise, too, and suggests this title is only going to get more dark as the story progresses. This first issue does what a first issue needs to do: it establishes the setting, the premise and the main characters (hero and villain alike – although, I’m looking forward to finding out more about each of them). Valen recruits his followers, and the quest begins.

The art is vibrant yet gritty and perhaps a little grimy, which suits the overall tone and story very well. The action scenes are very dynamic, adding to the sense of pace that the writing offers. Slightly subdued colours, alternating between muddier and cold hues, although there are a few scenes that have warmer tones to differentiate from Valen’s cold demeanour and single-minded purpose.

Ultimately, Valen the Outcast would be a fine addition to any fantasy fan’s comic collection. That being said, if you like your comics dark, action-packed and well-written, then this will also suit. This exceeded my expectations. Very highly recommended. Can’t wait for the second issue. 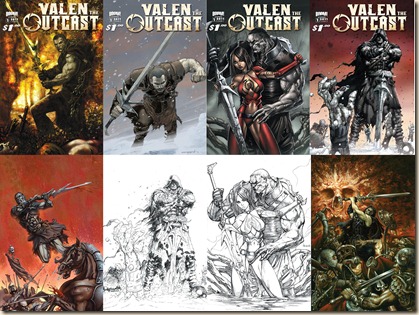 The Many Cover Variants for Valen the Outcast #1