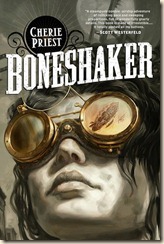 At the start of the Civil War, a Russian mining company commissions a great machine to pave the way from Seattle to Alaska and speed up the gold rush that is beating a path to the frozen north. Inventor Leviticus Blue creates the machine, but on its first test run it malfunctions, decimating Seattle’s banking district and uncovering a vein of Blight Gas that turns everyone who breathes it into the living dead.

Sixteen years later Briar, Blue’s widow, lives in the poor neighbourhood outside the wall that’s been built around the uninhabitable city. Life is tough with a ruined reputation, but she and her teenage son Ezekiel are surviving until Zeke impetuously decides that he must reclaim his father s name from the clutches of history.

Boneshaker is a novel I had been dancing around for quite some time. I’d heard and read plenty of praise aimed at the novel – not to mention seen the glowing blurbs from Scott Westerfeld, Warren Ellis, and Mike Mignola printed on the cover. While in Los Angeles, I read the first handful of chapters when in a bookstore’s cafe. What I read intrigued me, so I bought a copy of the book. My thoughts are mixed, which makes it a tough review to write. The novel has obvious strengths, but it also has some weaknesses.

The history-book-like chapter that opens the novel very quickly gives us the setting and ‘common-knowledge’ of the world and the inhabitants of Seattle and its surrounding area. I thought this was a very good device to get the reader located and allow the story to hit the ground running. We’re introduced to Briar and Zeke quickly, and we get a sense of their frustrated living situation and the strain it puts on their relationship.

Priest’s writing is very good, but also suffers from some uneven passages. The dialogue is great, fluid and realistic, and rarely did it ever feel cliché or forced. Where I had most problem with the novel and writing was in the passages of exposition and description, which were inconsistent: it is either highly atmospheric and gripping, or it feels ponderous and ruined the momentum.

This factor was frustrating, as Priest’s vision of the world is unquestionably interesting and well-conceived, and you quickly get the sense that the author adores the steampunk aesthetic. As a result, there is plenty of evocative writing, frequent good turns of phrase, a few chuckle-worthy one-liners, some nice touches and great attention to detail.

The action sequences are very well written, too, and whenever two or more characters are interacting, then the story moves along at a fair clip. It’s when people are on their own or when there are longer stretches without dialogue – particularly the chapters from Briar’s perspective, in the first third of the novel – that the pace suffers most. The majority of the writing in this novel is great, but the wobbles in pacing do trip up the overall momentum, and aren't so easily ignored or brushed over. There were many times when I would mutter “get on with it”, or start skimming certain paragraphs and passages.

The novel references the prejudices of the time directed at the Chinese “coolies”, who were basically shipped in as cheap labour in the mid-19th Century, to help with the great works of the time (railroads, dams, bridges and other large infrastructure projects), but were hated and sometimes feared by the locals. This dynamic informs a lot of the interactions between the few people who still live in Seattle. I thought this was a nice touch, and showed a welcome appreciation for and attention to historical detail.

Despite these positive things, I remain unsure about what I actually think of this novel. It’s interesting and mostly fast-paced, and the world is evocatively realised on the page, certainly, but there are some weaknesses that are difficult to ignore.

I feel like I didn’t really get to know the characters as well as I would have liked to, despite following them for just over four hundred pages. Zeke’s voice isn’t consistent or given much chance to fully develop, and he switches between acting like the fifteen-year old child that he is, to sometimes seeming far older or younger. It was therefore a bit difficult to get a proper handle on him. That being said, Briar and Zeke’s relationship feels quite real, and you sympathise with her because of the estrangement forced on them by their difficult situation. Her frustration with herself at the beginning is well-portrayed, just as the later rapprochement between her and her son is quite touching – there’s a motherly warmth that is rather endearing and strange, given the situation in which we see it (that’s all you’re getting on that – too spoiler-ish as it is), and it is a nice change from her somewhat frantic behaviour at the start of the novel.

Is it possible that Boneshaker is intended as a scene-setting book for the series as a whole; meant to get us familiar with the world in which it is set? Perhaps, but given that the world-building focuses on a walled-in and zombie-infested Seattle as a setting, which does not feature in later volumes of the series (as far as I’m aware), I'm not sure anyone could argue this as being the case. The setting in itself is a strange choice. I often wondered why people actually remained in or around the city. There are no industries present other than those that serve the immediate vicinity – water is purified for those who have stayed in the area, the Blight Gas is harvested to turn into exceedingly dangerous drugs that are consumed only (as far as the novel suggests) those who have remained in or around Seattle. Surely there were better prospects elsewhere for those whose lives were disrupted by the devastation? (In California, for example.) There just needed to be a little more explanation as to why people remained: doing so just seemed suicidal.

One other major concern for me was the devotion Briar engenders in the regulars at Maynard’s, a bar in Seattle she stumbles across. It was a little too quick to form – she’s only with them for a little over a day, and yet they become fiercely loyal to her without her really doing anything to deserve it. It makes their actions during a key event later in the novel feel forced and improbable.

Despite how much I’ve written about the above issues, they remained of relatively minor concern while actually reading Boneshaker, as I was mostly entertained throughout – particularly the final quarter, when the various plot threads are stitched together, and Briar and Zeke’s journey’s come to an end, and the pacing becomes more consistent. After finishing it and mulling it over with a couple of people, the issues crept to the forefront of my thoughts. I did really like that Priest did not make the zombies (or “rotters”, as they’re called here) so central to the story as to just stitch together a series of skirmishes between the hungry dead and our heroes to make a novel (as can happen in so many zombie novels), as I tend to find that kind of plot dreadfully dull.

Boneshaker has a lot to recommend it – the world aesthetic and much of the dialogue, in particular. But, considering its length, I did not feel like I got a novel’s worth of satisfaction out of it. Perhaps if it had been streamlined a bit more, trimming down some of the description and allowing events to dictate the story, rather than the world dictate some of the events (which occasionally felt like afterthoughts). I will certainly be checking out the other three novels in the Clockwork Century series (I’ll need a US Kindle to read Clementine, though), as not only do I think Priest has a great imagination and skill at evoking the steampunk world she has created, but I also hope that with more novels in this world, the balance between world-building and plot will be redressed, and Priest will allow her stories to guide her writing – the premise of each novel sounds great, after all. We’ll have to see, but I’ll be sure to post reviews up here as and when I read them.

If you’re after a steampunk action-adventure novel (with zombies), then this should serve your taste and need. However, if you prefer your novels to driven by character development, you might find yourself wanting more by the time you finish Boneshaker. This was a difficult review to write, because I both enjoyed and was frustrated by this novel, and left with a strange lack of satisfaction at the end.

Posted by Civilian Reader at 6:26 AM