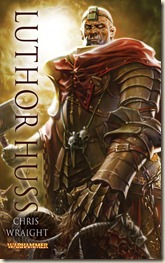 Witch Hunter Lukas Eichmann investigates a series of bizarre murders, which ultimately lead him into the haunted depths of the Empire at the head of an army of fanatical warriors. In the Drakwald Forest, Luthor Huss, warrior priest of Sigmar, battles to free the denizens of the forest from a plague of the walking dead. As their fates entwine, the two warriors confront a threat that will decide their future, while Huss must face a secret from his past if he is to survive and embrace his destiny as the Hammer of Sigmar.

Chris Wraight certainly does the warrior priest and witch hunter justice in this story, where the fates of both are joined by forces beyond their control. Any fan of both the Empire and, especially, the specifics of faith within fantasy will get a kick out of this novel. It had been quite a while since I last read through a Black Library book, but this was a welcome return to the world.

As the synopsis states, this is a story that follows two characters, Lukas Eichmann and Luthor Huss. While the latter of the two might be familiar to many of you who know Warhammer, the first is a character created specifically for the series. This is no bad thing, since his profession is certainly one that will be familiar. This is one of the first things that strikes you about the novel: while you think you have an idea of how these character should behave, Wraight manages to turn these expectation on their head. It’s always good to see a writer subvert norms, especially within a world that’s very well-loved.

The best way to approach this novel is be to take a look at each of the main characters in turn, and I think we should start with the warrior priest, Luthor Huss.

Going into this story, I had particular ideas of how Luthor Huss should be portrayed and, while a few of the details about his character were present, I was pleased to find something a lot deeper than just a fanatical priest of Sigmar. Through the chapters he dominates and his journey, you see a lot more than a blind follower; someone a lot more human. As a reader, this is always good as you can find a connection with the character, relate to their feelings and experiences, and want to find out what happens to them next.

There are a number of ways in which Wraight manages to subvert the stereotypical view of Luthor Huss, first and foremost in his personal, religious thoughts. Where others within the Temple of Sigmar would be lunatics, he has a tempered manner and throughout the story shows plenty of common sense and restraint. Of course, when you have a warrior priest of Sigmar with that attitude there has to be something driving him. Thankfully, Wraight delves just enough into his past to reveal motives but not so much as to over-explain things – it’s always good to leave a little mystery.

There are other ways in which Wraight fleshes out Huss – for example, the inclusion of a female character which not only tests Huss but also provides a way for us, the reader, to travel along with the warrior priest. Mila, whom Huss saves from a doomed village in the Drakwald, could easily have become an irritant, slowing down the story, but instead she served to spur it on and add extra nuance and depth. Her interpretation of what Huss ‘should’ be is similar to ours as readers, and so you have an interesting link into the action and narrative.

Lukas Eichmann shares many of the same traits as Luthor Huss. Both are bound by duty to serve Sigmar but are not so blind or zealous as to accept everything at face value. When the two characters are brought together by circumstance, it allows both to test their beliefs against the other. Both are violent characters, both are agenda-driven, and both use their faith as a weapon. But there are interesting clashes within their personalities, especially as they spend more time together.

Speaking of violence, this is what the stories set in the Old World do best, and you won’t be disappointed by the action in this novel. It’s not drawn-out, but nor is it too short, allowing for plenty of gruesome blood-and-guts, while not dragging the narrative away from its main course. Towards the end of the novel especially, you see the true power of Huss bought to life on the page, but while other books would have had him become unkillable, and this being the Warhammer world, there is always something to cast a shadow over the light.

The combat, action and narrative have the classic Warhammer ‘grim-dark’ twist, too, and you’re never sure whether or not a given character is going to make it through to the next chapter. I’ve always liked this about the Black Library novels, and Wraight doesn’t disappoint.

An interesting antithesis to both characters is Lukas’ henchman, the brooding and violence-loving brute, Udo. I typically like bruisers in the world of Warhammer and, while his main purpose is to be the outwardly violent part of Lukas’ personality, he also comes into his own as the plot develops and you see another side to Udo that other writers might have ignored. This is just another example of a character brought properly to three-dimensional life by Wraight.

I have a few quibbles with the book, but nothing that outweighs the fun I had reading it. It seemed too short and felt a little like it was a short story that had been extended. Of course, this might just be the taster for a whole line of Luthor Huss novels and I certainly wouldn’t be one to complain about that. To this end, a few of the scenes and chapters can feel a little rushed, and it felt like a few of the key moments could have been elaborated on or expanded.

Overall, this was a fantastic telling of the back story and experiences of Luthor Huss, a character of significant consequence in Warhammer lore. Wraight has dealt us just the right amount of fanaticism, brutal violence and humanity to make it a story worth reading. I certainly wanted to create my own army of fanatics and warrior priests after I’d finished.