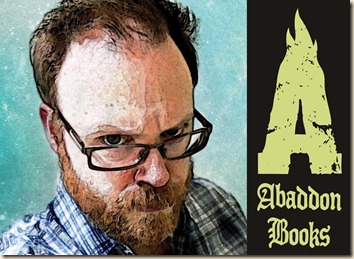 In summer 2013, Abaddon Books will publish Gods and Monsters: Unclean Spirits, the first novel in a brand new shared-world series. Here’s the synopsis:

Exiled to Earth, the gods now walk amongst us, bringing with them their children and their servants and their monsters. Their power is a mere fraction of what it once was, but even a mote of divine magic is awesome – in the truest sense of the word.

Cason Cole knows this firsthand. He’s been serving the gods for the better part of a decade, their leash fastened tight around his neck. But when his most recent divine master gets killed – a thing Cason didn't even know could happen - he finds himself once more a free man. All he’s got left is a burning need for vengeance against the very gods who forced him to kneel, but he'll soon discover that getting revenge against the gods is no easy feat. He’ll have to put his life, love, sanity and soul on the line. Will he pay the cost? How priceless is his wrath?

I am a big fan of Mr Wendig, so I am always happy to hear of a new novel in the works. In the spirit of fanboy discovery, I fired a couple questions over to Chuck, to get just a little bit more info on the series…

How did the project come about?

I wrote DOUBLE DEAD for Abaddon, featuring Coburn, the “Vampire in Zombieland.” By all reports that book did pretty well and Abaddon and I had a good relationship, so they came back and asked me to write two more things: one was BAD BLOOD, the novella sequel to DOUBLE DEAD, and the second was to help them launch this new shared-world series.

Could you tell us a little bit more about the novel and series? What to expect, and so forth?

The story reveals a world where the gods of myth and legend – as well as their children, their heroes, and their attendant monsters – have all been exiled to the mortal realm. They still have some of their power – but it’s a sliver of what they used to possess. This particular book tells the tale of Cason Cole, a man who’s had the god’s leash around his neck, a leash that’s made a mess of his family and kept him from seeing his wife and son. It’s about him going against the gods and seeking revenge, but then it asks whether or not his desire for revenge will only further interfere with his family. That’s the 30,000 foot view – this book and the world features lots of little plot bits that, for now, I’ll keep under wraps!

Where did you get the inspiration for the novel?

Mostly it’s because I love mythology. Such rich tale-telling there. The gods and goddesses are plump with story and character, so to bring them into an urban fantasy/horror context is a lot of fun.

Cason’s story in particular comes out of my own recently-grown family (I’ve got a one-year-old son), so I’m always playing the game of wondering how far I’d go for them.

Will you be writing more in the series?

Answer unclear, ask again later! Let’s just get through this one first and we’ll see. :)