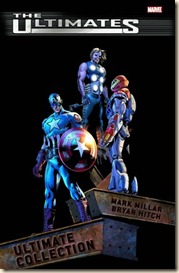 Strange beings with incredible powers have risen up to challenge the old order, and ordinary citizens are scared witless. The government’s solution: a small but lethal army known as the Ultimates, created to protect us all from the newly rising threats to mankind!

Despite the plentiful recommendations and obvious popularity of this series, I’m sad to say it left me utterly underwhelmed. The story felt flat and over-padded. It clearly had an influence on the recent (excellent) Avengers Assemble movie, but it still managed to fail on a number of levels. I will concede that these two books – also available in a special edition collection (cover image above left) – did have moments of inspired storytelling, but they were fleeting and far between as to have little overall impact on the quality or my level of enjoyment. 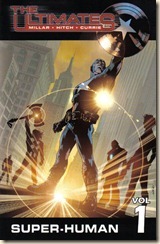 As the first volume opens, Nick Fury is assembling The Ultimates, who appear to be a form of the Avengers, with the sole purpose of creating a defence force so powerful nobody could consider attacking the United States. Given the time in which the book was originally published, this isn’t too surprising (during the War on Terror days).

The only ‘problem’ for the Ultimates at the start, though, is that they don’t actually have any enemies at which they can be pointed and unleashed. So, in what can only be described as a moronic move, one unstable member decides to become the enemy… I’m afraid this is where I started to have a number of issues with the book.

Mainly, it’s the story – Millar and Co. take six issues to set up the team in a manner that’s rather underwhelming and a little uninspired. Cameos from real people like George W. Bush, and the obsessive marketing of the team within the story, made me wonder if Millar was taking a rather ham-fisted, “tongue-in-cheek” jab at Marvel (and other big-name comic book publishers) and their own massive, excessive marketing strategies. It didn’t really work, because it just grated. 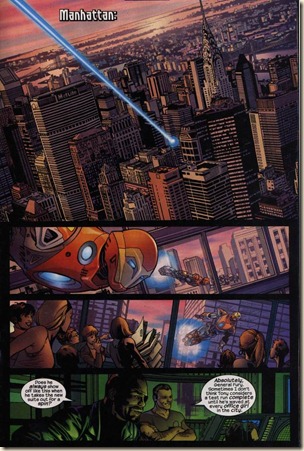 Captain America was nicely done, but then he’s a very interesting character to play around with, and I thought his side of this story was well-written (though not nearly as well as Brubaker’s take on the character – reviews here and here). Bruce Banner is a maelstrom of neuroses and adolescent insecurities (it’s no wonder he became the Hulk, really), and when he finally does Hulk-out, he comes across less as a rage-filled-monster than a caricature of adolescent petulance and narcissism. Tony Stark/Iron Man is reminiscent of Robert Downey Jr.’s portrayal of the character, but over-the-top and not as reigned in as RBJ’s portrayal (never expected to write that…). Also, and this is really a small thing, what’s up with the green goop he seems to become coated with every time he wears this new suit? The relationship between the Pyms (Giant Man and Wasp) is bizarre, and their marital problems escalates to a surprising level at the end, in an altercation that, to me, appeared to come out of nowhere. It is, however, something that suggested the story was going to go in a darker direction and address a genuinely important social problem (domestic abuse). 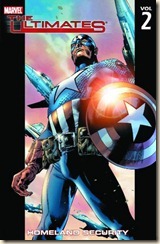 The second book starts off with this story-thread, and again suggested the book would take a look at the darker side of super-hero relationships. It had a lot more potential – we see the post-Hulk clean up and damage control, as well as the people of New York and the Ultimates paying their respects to the hundreds of lives lost in book one.

The Pyms’ storyline is a lot darker than first suggested – the event that brought book one to a close was not an isolated incident, so we are given a story of super-“hero” domestic abuse. It took a while to get going, though, and then just disappeared in the background. An opportunity lost, certainly. Not that I wanted the series to be preachy, but along with the value of discussing this subject, I think Millar could have broken the mold of super-hero stories and done something original and important.

Anyway, the main thrust of this book is a widespread alien invasion/infiltration conspiracy, which leads to some deadly confrontations between their established agents and the Ultimates. It’s big, it’s brash, it’s Avengers written by Jay Bruckheimer or Michael Bay.

The book doesn’t lack for humour, but it comes in two forms – wry and slightly sophomoric (anti-Bush comments, that sort of thing). The banter between the characters wasn’t as good as I’ve seen in other Avengers titles (for example, the Bendis-penned, new Avengers Assemble). I did like this version of Thor, though, who is described as the “pacifist with a big scary hammer”.

The second volume is longer, but it feels like there’s just as much of a lack of story. It’s a real shame, given how popular this series is. The only reaction this elicited from me was, “meh”. I should state, though, that the artwork throughout is pretty good and it’s a very good series visually.

Ultimately, though, these two books just aren’t that great, and don’t meet the high standards I would expect from Millar and such a big, obviously important series. The aforementioned new Avengers Assemble series is much better (even though it’s only a handful of issues in), which makes me wonder if I should have tried Brian Michael Bendis’s established Avengers and/or New Avengers instead of this (there are some great collected editions already available, although the hardcovers are a little pricey).

If you want to read Millar’s take on the Avengers, then by all means pick this up. But, I would warn you that I don’t think it’s nearly as good as his other work I’ve read, nor is it as good as other Avengers comics and graphic novels I’ve read.

Millar also penned The Ultimates 2, but I’m really not sure if I’ll ever try that series. The Ultimates 3 (“Who Killed the Scarlet Witch?”) was written by Jeph Loeb, who has been pretty good in my experience. So, maybe I’ll give the rest of the series a try.