Breaking News! The Way Of Shadows gets Manga Adaptation 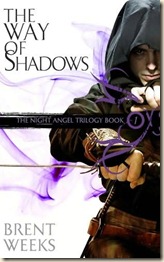 Ok, so it’s not really breaking news, as Brent Weeks already announced it on his website on Friday. Nevertheless! This is news for me! And it’s very good news, I think, so just wanted to share a quick mention on the blog.

Here’s what the man himself had to say about the deal:

I’m so happy I can FINALLY share this! This afternoon, at their annual San Diego Comic-Con panel, Yen Press announced their upcoming adaptation of The Way of Shadows. The Way of Shadows graphic novel will be a single-volume adaptation, and is slated for release in 2013.

Yen Press is a leader in the field of graphic novels, having adapted works like Witch & Wizard by James Patterson and Gail Carriger’s Soulless among many others…

I’ve already been discussing artists with Kurt whom we believe will bring a unique and bold vision to The Way of Shadows. I’ll announce who we’ve contracted and release samples of their art as I am able to do so.

I’m a huge fan of Weeks’s writing, and can’t wait to check out the adaptation.

[Writing this post, I also realised I’ve never interview Brent… I will have to rectify this…]