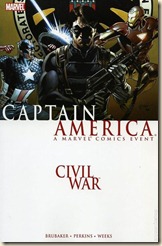 Captain America has fallen into a clash with his government and his friends, and the people close to him are paying the price. The life of Cap’s girlfriend, Agent 13, is torn apart as her superiors use her divided loyalties against her. Elsewhere, a new villain emerges; the Red Skull begins to make himself known; and the Winter Soldier again comes face-to-face with Cap. But which side will he choose?

I read the first two volumes of Brubaker’s Captain America – Winter Soldier and Red Menace – quite a while back. However, despite really enjoying them, I decided I wanted to read the Civil War collection before diving into this third installment to the series. The main event book was a little disappointing, but this volume as a part of the Captain America series was far more satisfying.

The book opens with Agent 13 – Captain America’s some-time lover and full-time S.H.I.E.L.D. liaison – recounting to a shrink her confrontation with Cap about his rebellion against the organisation and the Registration Act. It offers a good side-bar and alternative perspective to the early chapters of Mark Millar’s Civil War, and is much more in the style of Captain America (in terms of both Brubaker’s writing and Perkins’s superb, atmospheric artwork). I really liked the way Agent 13’s dilemma is presented in the text, but especially through the nice touches in the artwork – it’s really detailed and very realistic. For example, in one panel, she’s nibbling nervously on her fingernails. I couldn’t find that particular panel as a preview image, but here’s Agent 13 a page or two before: 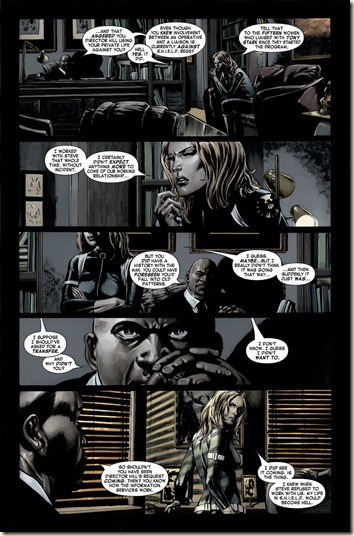 The next chapter focuses on what Bucky/Winter Soldier’s up to – sneaking into S.H.I.E.L.D. bases, directed by Nick Fury, who is in hiding. We also learn a little more of the nefarious forces that are maneuvering to take advantage of the ongoing Civil War, taking advantage of Captain America’s fugitive status and the hero community’s general chaos and distractedness. 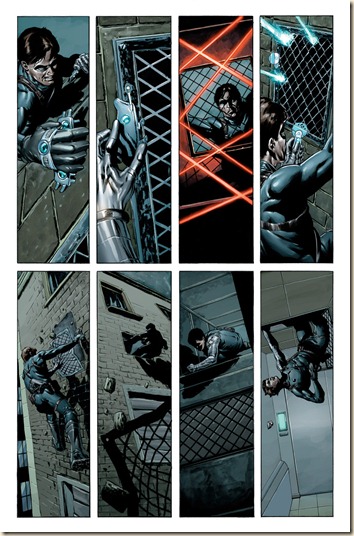 The third and final part of Captain America’s Civil War run focuses a bit more on Cap himself, as he attempts to reacquire the Red Skull’s trail. His investigation leads him to a massive brawl with some Hydra mooks, which is a very good, dynamic few pages.

I would say that it’s definitely important to read the main Civil War book, otherwise you really will only be getting a fraction of the story, and maybe not appreciate why everything in Cap’s life has collapsed so quickly. I can imagine this bothered readers who were following the series as it was coming out, and hadn’t been paying attention to the overall Marvel Event (which I imagine could have been a fair few people – I’ve written frequently about the labyrinthine connections between all of Marvel’s plethora of titles).

I love Perkins’s artwork, of course – as you can see from the examples, above, it’s atmospheric, complete with moody shading and dark colour palette. I particularly like the ‘painted’ quality of the art and colouring. It’s really excellent. 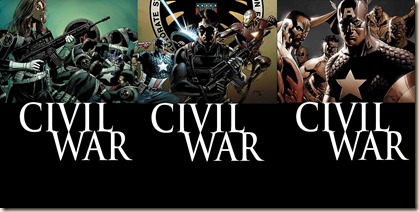 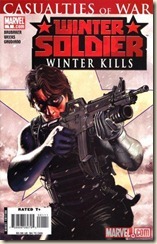 In the midst of the harsh division of the Civil War, James Buchanan Barnes, Captain America’s one-time partner Bucky, faces his first Christmas of the 21st century. And faces the truth of the terrible things he was forced to do as the Winter Soldier. And with Cap caught in a conflict he can neither take a side of – or understand – what moves can he make to try to redeem himself? And what do Hydra have planned for New York this Christmas?

Featuring guest appearances by the Young Avengers and some of the original Invaders, this Special issue is an action-packed character study that defines the Winter Soldier’s future place in the Marvel Universe.

In addition to the three issues that tied in with the Civil  War storyline, this book also has the Winter Soldier one-shot that was released around the same time. Brubaker revolutionised the Captain America story by bringing Bucky back to life as the Winter Soldier. Since then, the character has regained his memory and own mind (he was brainwashed by the Soviets who recovered his near-dead body) and is trying to relocate himself, mentally, into the modern age. He’s still struggling with the culture shock, as well as the horrific acts he was forced to do as the Winter Soldier (a title he will actually keep).

In this particular story, Bucky is discovering that he doesn’t really like modern Christmas. Part of it is the dour atmosphere in America. Part of it is being alone and having no loved ones. So, when Nick Fury contacts him for a favour, Bucky semi-reluctantly agrees to help him out on the way to a prior appointment. This brings him into contact with a few younger heroes, who are a little stunned when they discover who he really is. 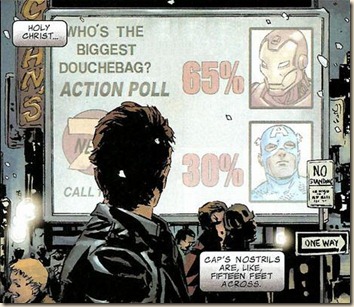 It’s a bittersweet story, and also a very good one. I think Cap’s and Bucky’s out-of-time quality is really great for the stories Brubaker’s coming up with. It’s really superb stuff. This is a very highly recommended series.

NOTE: Brubaker is still writing Captain America, but the series was – like almost all of Marvel’s series – re-booted in 2010 with the start of the “Heroic Age”, which is itself coming to an end with the imminent start of “Marvel NOW”. I’ll be reading more of this particular series (“Volume 5”), and intend to finish it before starting the latest storyline. Next up in this volume will be the three Death of Captain America books. I think it would be a good idea to precede this series with Mark Waid’s Captain America: Man out of Time, which I intend to read very soon.

Here’s the chronology for Brubaker’s first Captain America run, for anyone who wants to jump in:

Posted by Civilian Reader at 1:56 PM