Catching up with MARK CHARAN NEWTON

Mark Charan Newton’s Nights of Villjamur was one of the first books I received unsolicited from a publisher, and I really enjoyed it. The sequels, City of Ruin and The Book of Transformations just got better and better. Now, with the final book in the series – The Broken Isles – hitting shelves, I thought I’d send Mark a few questions to see what’s been going on since I first interviewed him, back in February 2011. 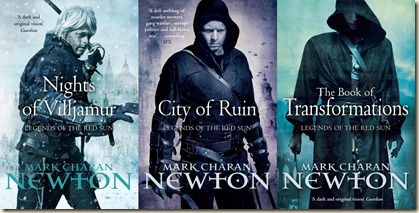 The Broken Isles marks the end of your first series. How does it feel to have it finished?

Relieved, mostly. Writing a coherent fantasy series with a satisfying ending is an immense challenge. I had to cross-reference things I was thinking or doing four years ago, which is not easy. Also, I didn’t want to drag it out – I wanted it to end cleanly. So it was a logical challenge that I’m not used to – the previous books had a greater degree of creative freedom, whereas this was somewhat restrained by what I’d done before. I like to think it was rewarding, too. Also, it’s great that it features a sketch from China Miéville – because reading his books was one of the reasons I started writing in the first place, so it feels bizarre (and very cool) that one of his drawings could feature in the book.

(For those of you who have no idea what I’m talking about, check out this blog post.) 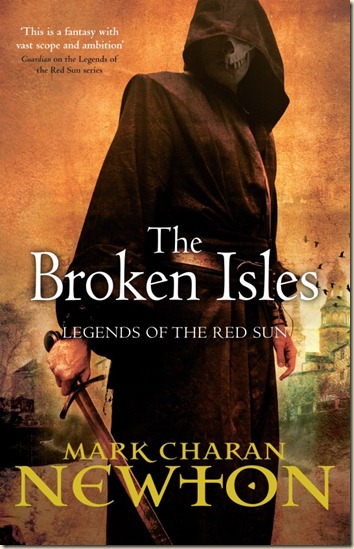 I think, book by book, I’ve become a much cleaner, better and more nuanced writer – which I’ll expand on in the next question. I’ve also learned a lot about the art of crafting a novel and a series, as well as how to improve as a writer – though others might disagree! I’m quite competitive with myself, so it was important to see what others thought I was doing wrong so I could try better. So I think I’ve learned lots of small lessons.

Oh god yes! Nights of Villjamur was a bit of a sloppy book. There’s loads I wish I’d done differently – luckily, in a forthcoming edition in November, I’ve been allowed to make 200 changes to the text. All small word changes or sentence removals – but the kind of thing to create a smoother reading experience.

I think, also, that I tried to mix too many aesthetics up, and deliberately throw in anachronisms, which displeased the regular fantasy reader. Genre fans definitely appreciate immersion, and not getting taken out of a particular mood, I don’t think. 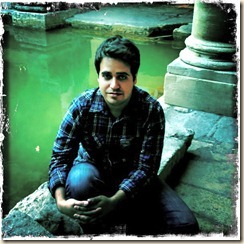 Hopefully I’ve put a lot of these faults to rest in the new series. I’ve drawn a line, stylistically, between my current work and the Red Sun series.

In what is tentatively called The Lucan Drakenfeld Mysteries, I’m writing crime-fantasy adventures that are largely inspired by ancient cultures. I’ve been reading so much about the classical world, and it’s such a great aesthetic. Fantasy writers – well, epic fantasy writers, at least – borrow heavily from history, though it’s usually the Middle Ages, and usually done unconsciously. I’ve been very conscious about creating a world that might have existed just off the fringe of the classical maps.

What else? Well, it’s a first person crime narrative, but not noir – a commonly misused term, I find. I wanted it to work well as a crime novel as much as a fantasy one. So I guess it will appeal to fans of historical mysteries to some extent – the first novel contains a locked-room mystery (well, locked-temple to be precise) – but I think fantasy fans will really enjoy it.

Also, it’s my rebellion against what’s becoming known as “grimdark” fantasy – you don’t have to fill a novel with macho posturing, violence and sex for it to be considered adult.

Email ThisBlogThis!Share to TwitterShare to FacebookShare to Pinterest
Labels: Broken Isles, Catching Up With, City of Ruin, Fantasy, Interview, Legends of the Red Sun, Mark Charan Newton, Nights of Villjamur, Sci-Fi, The Book of Transformations, Weird