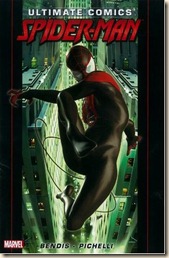 A superb introduction to the new hero

Miles Morales is the new Spider-Man. What's the secret behind his powers and how will he master them? What new and familiar enemies will rise to challenge this all-new Spider-Man? And will Miles live up to Peter Parker’s legacy?

I was dancing around getting this book for quite a while. I’m not sure why, but I was labouring under the assumption that the “Ultimate Comics” line was for younger readers. I have no idea why… Anyway, I decided to pick this up, and I’m very glad that I did. It’s a superb introduction to the new Spider-Man – how he got his powers, how he got used to his powers, and how everyone else started to get used to him and who he will become. This is a really good comic.

The book starts off quite funny, despite the sad circumstances – a Spider-Man is attempting to prevent a street brawl, while onlookers keep telling him that his costume is in bad taste – it’s obviously too big for whoever’s wearing it, but at least he does the job. 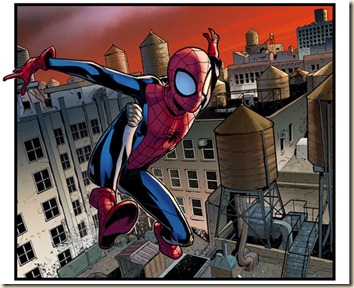 The story then turns back the clock, and we join Miles Morales and his parents at the latest lottery for select places at a Charter School in New York. I really liked the origin-part of the story. It’s definitely timely, socially relevant commentary, and brings the Spider-Man mythos up-to-date and into the 21st Century very nicely. Miles comes from a poor background, more so than Peter Parker’s, with the added modern-day concerns – the lotteries for kids to get out of failing schools and into the Charter institutions (which Miles is lucky to be selected for), is just one of the considerations facing the Morales family. Miles’s uncle is also a criminal, and it is through his actions that Miles winds up bitten by a spider and granted his special powers.

Miles has some different powers to Peter Parker’s, it seems – he is able to camouflage himself, for example, and also a handy venom zap that he can (and does) use to gain a little advantage against larger foes. He can also walk on walls, etc., of course, much to his surprise.

He takes a while to get used to the powers, and is not entirely happy about having them – his father often voices anti-mutant sentiments, which leads Miles to keep his powers very-well hidden from everyone except Ganke, his best friend (who also got into the Charter School). There are some great scenes between Miles and Ganke, with some fun quips, and you really get a sense that they’re actually friends, and not just because we’re told they are for the sake of the story. They’re both very well written.

There’s a really moving, difficult scene when Mr. Morales tells Miles about his troubled youth with his uncle, how he spent time in prison, and why he doesn’t want Miles to spend a lot of time with him. A nicely handled scene, pulled off well in the writing and artwork.

On the first page of issue #2, there’s a nice snippet of commentary on those people on the internet who reacted so angrily against the announcement of Miles Morales as the new Spider-Man: 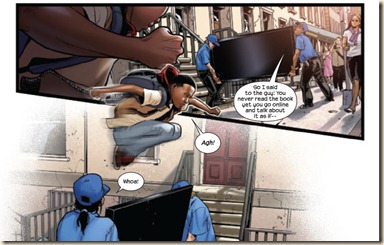 The Death of Spider-Man occurs in issue four of this series, and it is then that he decides to do something with his new abilities. This puts him squarely in the sights of the Avengers, who are not entirely happy with his appearance on the scene.

This series is, thus-far, pretty fantastic. The writing and artwork complement each other perfectly, and I found myself hooked from the very beginning. I would definitely recommend this series to all fans of Spider-Man and related comics.

I’m going to have to find time to read the second volume, Scorpion (which is already available in stores).

Posted by Civilian Reader at 6:11 PM