The Joker Returns for “Death of the Family” (DC) 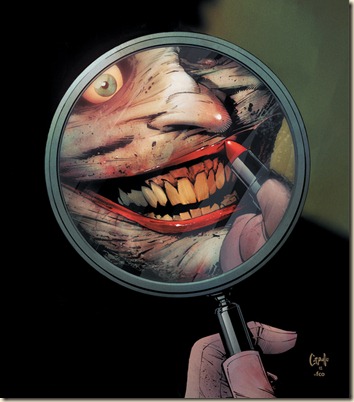 Paul Montgomery has interviewed Scott Snyder over on iFanboy about the author’s plans to bring back the Joker to Batman. The giggling, maniacal super-villain has only played a minor role in the New 52 so far, but he is going to return in full force in Batman #13. Here’s what Snyder says about the Joker, his “favorite villain” ever since he started reading Batman. The Joker, who gives readers “a glimpse at how rich and psychologically deep and dark the Bat mythos [can] be”, also “exposes the darkest corners of Bruce’s heart.” Which is part of where the series gets its appeal. The Joker “revels” in his relationship to Batman, believing he has a “special bond” with him.

“He loves pointing out the pathology in Batman… In a way he’s like a demon on Batman’s shoulder… he’s an incredibly rich and wonderful, wonderful villain. As terrifying as he is, he’s everything I love about creating a villain in one package. To me, the greatest villains are the ones that really are your greatest fears about yourself come to life. the Joker revels in that in a self aware way. He knows you inside and out. That makes him consistently dangerous and deadly, both psychologically and physically.”

Snyder has done a fantastic job with everything Batman-related he’s produced – from Gates of Gotham to his New 52 Batman run, he just seems to get the Dark Knight and Gotham. So, I’m really excited tor read his take on the iconic villain.

Also, in the wake of the Night of the Owls cross-over event, and Snyder’s comments that the Joker has a “huge axe to grind” with the Bat-family, those who do not like cross-over events have nothing to fear. Even though “you will see a lot of main Bat Family characters in Batman… Batman will be 1000% self contained.” The author continues:

“You will not need to read anything else to get the full story that I’m planning for Joker here. But because the Joker does have an axe to grind with those characters and part of his plan is tearing them to shreds, he will appear in a number of those books after the story gets going in Batman. Those stories will be self-contained also, so you’ll be able to pick them up and read them and see the story lines continue in those books you’ve been reading. In some cases they will feature things the Joker has been planning for a long time, while some will be more abrupt where he destroys what’s been going on. But the point, really, is that the Joker has been watching Batman and the family for the full year he’s been away and he’s been setting his traps and sharpening his cleaver and waiting to spring those traps. Now, Halloween, a year later, he’s ready.”

You can read the rest of the interview on iFanboy. Batman #13 will be released in October 2012. 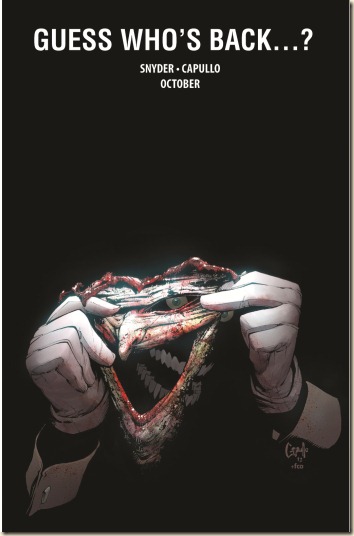 Posted by Civilian Reader at 12:07 PM