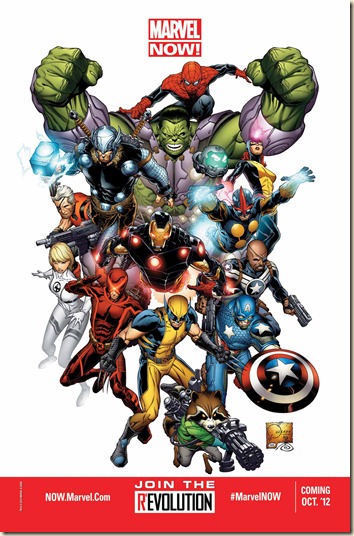 So, right off the bat, I think that’s an awful title for a new comics initiative. Especially with the capitalised “NOW!”. Just wanted to get that out there. [If you are familiar with The Gutters online comic-commentary website, then you’ll see how this announcement almost writes its own humour…]

Marvel doubles-down on the cringe-worthy PR-speak with:

“ushering in a new era for comics and the perfect jumping on point for new readers. The biggest creators bring you the biggest characters in the biggest stories… and it’s happening NOW!”

Colour me sceptical, but we’ve heard this sort of talk before from almost every comics publisher. This latest initiative will kick off in October, with Uncanny Avengers #1, which will be written by Rick Remender (Uncanny X-Force, Venom) with art from John Cassaday (Astonishing X-Men, Captain America). A “jaw-dropping” new Marvel NOW! series will then kick off nearly every week through to February 2013.

Axel Alonso, Editor-in-Chief of Marvel Entertainment, had this to say on the initiative:

“There’s never been a better time to check out comics than Marvel NOW! … This isn’t a reboot or a reimagining – Marvel NOW! is all about looking forward, building on our rich history of great stories and delivering new ideas.”

I’m going to call bullshit on that – it is a type of reboot and a type of reimagining. Sorry. DC did it first, and it was far better received than your ReGenesis line of comics (which still, admittedly, did rather well).

In Uncanny Avengers #1, the Avengers and X-Men join forces to “overcome the greatest challenge either team has ever faced, one so devastating that neither can afford to do it alone!” That sounds a little familiar…

“Can Captain America’s newly assembled team find a way to peacefully co-exist while also dealing with the game-changing repercussions of Avengers VS X-Men?”

Other new Marvel NOW! series, will include:

Tom Brevoort, SVP, Executive Editor, Marvel Entertainment, had this to say about the plans:

“We brought fans the biggest comic book event imaginable in Avengers VS. X-Men and now we’re taking the Marvel Universe to an exciting new place, beginning with Uncanny Avengers #1… If you’re a long-time fan, all the stories you’ve read will give you even more enjoyment of what’s happening now – we’re not abandoning our past. But if you’re a new reader, this is where you’re going to learn just why Marvel comics are unlike anything else you’ve ever read. And no character is left unaffected by Marvel NOW!”

Every comic book bearing the Marvel NOW! branding will include a code for a free digital copy (available through the Marvel Comics app for iOS and Android devices). Each issue #1 of Marvel NOW! series will also feature “special augmented reality content available exclusive through the Marvel AR app” – including cover recaps, behind the scenes features and more that “add value to your reading experience at no additional cost”. I’ve owned a couple comics with the AR stuff, and have never felt any compunction to check it out…

“This is the natural next step of the Marvel ReEvolution, as we evolve every facet of Marvel publishing,” explained Joe Quesada, Chief Creative Officer, Marvel Entertainment. “You’ve seen us craft new digital storytelling formats like Marvel Infinite Comics and bring added value to our comics with Marvel AR. Now our print comics leap into the future with a cinematic new look for our covers, exciting new designs for our biggest characters and stories that will send you on the kind of journey you can only get at Marvel.”

Will I be checking out these new series and issues? Yeah, probably. But I’m starting to think Marvel are desperately trying anything to weaken the impact of DC’s New 52 re-boot. I also think, given that many of the new ReGenesis-linked Marvel titles aren’t actually that far into their runs, new readers will probably still not really know where to jump in.

There’s going to be a new Avengers, New Avengers and Ultimate Avengers series? Great, how does that align with Avengers Assemble? Why should we read these new on-going series, when there are already plenty of collected editions from Bendis’s previous runs on Avengers and New Avengers? And more new X-Men titles?

Marvel are running the risk of absolute saturation, and they have splintered their franchises to the point of… well, what’s the point? I don’t know where to start, and with ever-more new series coming out, I think they won’t really be able to make much headway – they’ll capture a few new readers, sure, but those readers who joined after Schism could well just not see the point of getting more new series. Comics readers, while loyal and enthusiastic, are not made of money.

DC’s New 52, at least, seems more-or-less stable – despite some cancellations and a few new titles. Part of me is intrigued, but a more considerable part has to raise an eyebrow…

Update: Just took a closer look at the image at the top, and… Who the hell is this fellow?! 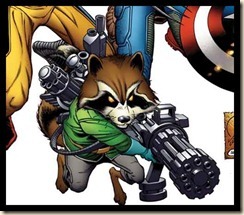 Raccoon with a big-ass gun!