Shaun Hutson is one of Britain’s best known and most successful horror authors, with over 50 books published. With some new projects on the way for Hammer Books, I thought this would be a great time to ask him about his influences and inspirations…

“Influences and Inspirations” by Shaun Hutson 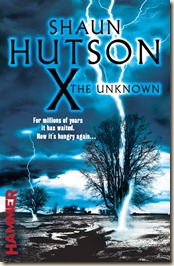 My influences as a writer have always been cinematic.

Ever since I first started scribbling things down as a kid I was always influenced by things I’d seen on a big screen rather than stuff I’d read. My books were always constructed more like screenplays, they always relied on dialogue as much as prose to set scenes and establish characters. This moves the novel along more quickly and is less irritating than a writer attempting to showcase his ‘talents’ by droning on and on for pages at a time.

I always visualized scenes in my head and then described what I saw as if I was running a film in my mind, and the earliest examples of this influence were the Hammer films I watched when I was growing up. They probably taught me the basics of story structure, pacing and all the other elements necessary for an effective story. I had no interest in what other writers were doing. I have even less now. Films were the prime source of inspiration and influence and that has continued. Inevitably, as I wrote more and became more successful, there were other things that drove my work (Heavy Metal music for one!) but the primary influence was always the cinema. The films that influenced me changed, but that was all.

I’d like to think that my writing even up to this time has retained some of the Gothic splendour that is associated with Hammer films. They did violent set-pieces well, they built tension and suspense, and they did it around characters that the audience came to care about. They had class and integrity (neither of which I make any claim to as a writer, I hasten to add!), but they were also lacking in pretension and that is something that all writers could learn from them. When you tell a story, don’t be deluded enough to imagine you’re going to educate or enlighten. Don’t try and preach or show off how skilful you are as a ‘wordsmith.’ Your first and only duty to your readers is to entertain them and if you think you’re doing anything other than that then you’re living in dreamland. If you’re asking someone to fork out hard earned cash to buy one of your books then the least you can do is give them their moneys worth.

Hammer films never tried to do anything other than entertain and when they got it spot on few others could live with them.

It’s ironic really that my earliest influence should now be the source of my three latest novels. Being asked to do the novelizations of Twins Of Evil, X The Unknown and The Revenge Of Frankenstein was a pleasure. To have my name associated with Hammer was a privilege. My only concern was to do justice to the three films I’d been asked to novelize. Obviously I won’t know if I’ve done that correctly until people start to tell me that I have or haven’t but I like to think I’ve repaid some of the inspiration that Hammer studios provided me with during the earliest stages of my career.

X THE UNKNOWN by Shaun Hutson is published this week (Hammer Books) and is available in paperback and eBook. The Revenge of Frankenstein will be published in February 2013, also by Hammer Books.