“Angel of Fire” by Will King (Black Library) 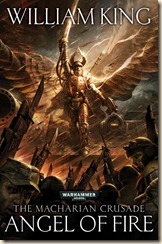 At the dawn of the forty-first millennium, Lord Commander Macharius and his forces embark upon the re-conquest of over a thousand worlds. A man of steel and fire, Macharius is the only one with the will to lead the massed armies of the Imperium to victory. As the crusade rolls onwards, it reaches the world of Karsk. In the city of Irongrad, the Imperial forces face the crusade’s end, unless Macharius and his army can defeat the dreaded Angel of Fire.

This is the first Warhammer 40,000 novel from King in quite some time – he took a hiatus from writing Black Library fiction, but has since returned with this and the Tyrion & Teclis series. Angel of Fire is a very good military sci-fi story. It’s not perfect, but it offers an alternative vision of a great Imperial hero that I hadn’t expected.

The novel opens with a very good combat scene, which introduces us to the narrator, Lemuel, and some of his companions. Lemuel is a veteran Baneblade tank driver. He has served multiple times with Macharius, and decides that someone ought to write down the story of what it was really like to serve with the great general, and to record the truth behind the legend. Even then, Lemuel gives the impression that much of Macharius’s reputation is entirely justified.

“We were there. We stood in his shadow. We were part of his legend. It’s the truth too.”

The story focuses on part of the early Macharian Crusade, when the general has turned his attention on a world ruled by a cult who worship the titular Angel of Fire. The planet’s leaders have claimed the Angel fought and exists by the Emperor’s side, but Macharius and Imperial command believe there is something more sinister going on behind the scenes. And so, the Imperial war machine is mobilised to take control of the capital hive.

What follows is a pretty good story of the hive siege, and King does a great job of evoking the tension of tank warfare from inside the tank, rather than a wider-lens approach. We see how the soldiers handle the dislocation of protracted warfare and also how PTSD can have multiple symptoms. For example, the “Understudy” (most of the characters are given nicknames, and their real names don’t seem to matter too much), who changes most dramatically from obsequious and cowardly to cold, disconnected, unpredictable, reckless and (most surprisingly of all) highly successful.

The novel offers a good, grunt-eye-view of the Macharian Crusade. I hadn’t expected this perspective, actually, but it’s a good way to keep Macharius’s reputation from disappointing, should something about the novel not quite work for the reader. It was interesting to see the effect he has on the Imperial Forces. The narrative manages to maintain enough distance that Macharius is only partially demystified, and retains that out-of-reach, legendary awe. For example, Lemuel recounts a speech the general gave shortly the Imperial forces attacked the hive city:

“I have seen the recordings of it since, the way he [Macharius] took the acclamation of the army as nothing more than his due and yet managed to make you feel as if it was deserved and not mere arrogance. There was something about Macharius then that made you think you were in the presence of something more than mortal. He had that quality that Space Marines have, of making you feel insignificant, but unlike them, there was no apartness. He was human, and he regarded you as human and being in his presence raised you up to the same exalted plane on which he lived.”

At one point, the narrator paints Macharius a little bit like the Bill Clinton of the Warhammer universe:

“He radiated... a certain reserved good fellowship. When he looked at you, you felt the full power of his attention fall on you. When he spoke, he seemed genuinely interested in what you had to say, even if you only stuttered out your words... He placed his hand on your shoulder in a comradely fashion and then moved on.”

All of the characters are nicely drawn and sometimes quite fun – especially Lemuel, Anton and Ivan. That being said, they still feel not-quite-fully-fleshed out. This, I think, may have been a result of the first-person narrative, and the fact that the whole novel is from Lemuel’s perspective. I really like how the three Guardsmen have been written – they bicker constantly, but in the way male friends do when they spend all day every day in each other’s company, and it felt realistic and natural.

King’s prose is very good and fluid, as can be expected from this experienced author. The story felt like it meandered a little bit, and didn’t feel as tight or confident as his previous novels – I think it could have benefited from a bit more punch. It’s still enjoyable, and Imperial Guard fans and fans of military sci-fi in general should certainly enjoy it. But, for me, I think King’s Tyrion & Teclis series is better. The novel has a decent ending, but one that leaves me unsure what we’ll see in book two.

I enjoyed this, and I have no doubt Warhammer 40k fans will likewise eat it up. I’ll certainly read the second book when it is available, but I am far more eager to read Sword of Caledor.