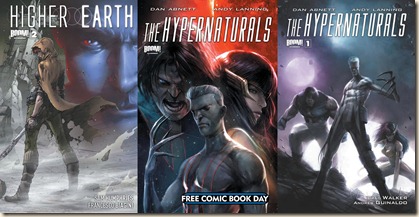 In this first Comics Catch-Up, I take a quick look at two titles from Boom Studios, both science-fiction, and both early in their respective runs. Higher Earth and The Hypernaturals both have pretty intriguing premises, and should appeal to fans of science fiction (comics, TV, movies and novels). I enjoyed both of them, but they were not perfect. 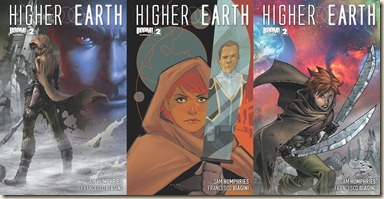 SPACE IS DEAD. WELCOME TO HIGHER EARTH. Pursued across timelines by the relentless forces of a thousand earths, Rex and Heidi take refuge in the planet-wide slums of Sunshine Earth 9. But how far can they run until they hear YOU ARE ILLEGAL ON THIS EARTH?

In this second issue, we see Heidi’s inability to adjust to being on a different Earth, and she quickly ditches Rex as she freaks out and runs away. There’s plenty of action, a little humour, and also a few gratuitously cartoon-y fight-scenes. Oh, and a dinosaur or two. 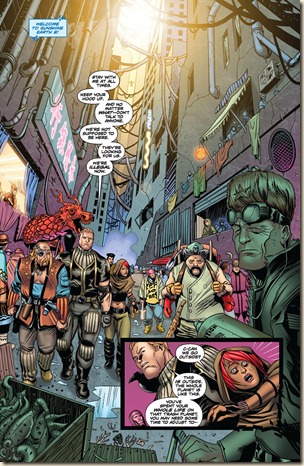 This series has a pretty cool premise, and I like the way it has been done so far. There is plenty of allusion to our own reality, issues with illegal immigration, poverty, and so forth. It is also a very imaginative setting, peopled by diverse and interesting characters.

I’m really intrigued to know where this story is going. Certainly recommended for anyone interested in sci-fi comics. 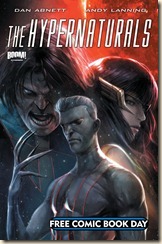 It is the far future; the human race has finally colonized the galaxy, preserving an era of prosperity that’s only possible because of The Hypernaturals – a celebrated, galaxy-wide superhero task force that keeps the peace. That is, until they all mysteriously vanish.

Now, as the galaxy teeters on the brink of chaos, it’s up to a group of retired and long forgotten Hypernaturals – and their novice recruits – to save the galaxy from complete destruction.

The FCBD issue of this new series from Abnett, Lanning and Walker offers a lot of exposition and background. It’s nicely done, and we are well-informed of pretty much everything we need to know to get stuck into the story. The current team of Hypernaturals has been wiped out, and some former heroes must step up to the plate. They bring a pair of newbies along with them, and set about investigating the disappearance and possible deaths of their team of heroes. Could there be a link to their past? Probably. Will they be able to figure out the clues in time? Possibly… 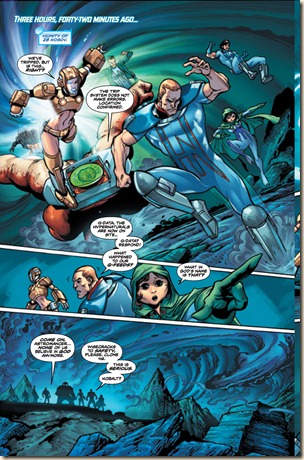 This is pretty inspired – the powers the Hypernaturals wield are pretty interesting. Thinkwell’s, in particular, is very original. Sometimes the creative team give us a little too much information spelled-out in the narrative (telling, rather than showing us), but for the most part this is a very good comic. There’s maybe a little too much dialogue, too. It slows down the pace of the story, but certainly leaves readers informed of everything.

Another interesting new series, I’m certainly looking forward to seeing how it shapes up, and if the writing settles down a bit. Not the best from Abnett/Lanning, but it’s still entertaining and intriguing.