In this week’s guest post, author Guy Adams talks about the influences and inspirations for his latest novel (published today), Hands of the Ripper.

HANDS OF THE RIPPER by Guy Adams 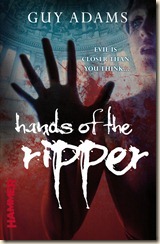 A writer trying to define his inspirations should be rather like a curry discussing the heritage of a particular onion. We’re influenced by everything and sometimes catching any single thread is impossible.

That said, it would be hard to write a novelization of a movie (however bold) without being inspired by it and Hands of the Ripper, while it may stand on its own two legs as a novel, will always be an adaptation of the 1971 picture from Hammer Films. On the surface I seem to have changed a great deal (it’s set in the present day for goodness sake), but you would be surprised by how faithful it is to the spirit of the original, no doubt through fear of antagonizing said spirit and causing a murderous rampage.

It’s not the only influence though. I don’t think its possible to write modern horror, of the dark, creeping style I’ve aimed for here, without being influenced by Ramsey Campbell. Horror comes in many flavours; blood-stained and meaty through to that mildewed, subtle hint of rot that I personally find all the more disturbing. At its best, horror gets under the skin not with a machete but with a well-turned phrase. A delicate horror, if you will, one that ultimately punches harder via a well-timed crescendo of dread.

Campbell is quite simply the best we have in that department. A truly lyrical author who weaves a disturbing landscape around the reader with every fresh page. Campbell wants us to be scared of everything.

“A lorry cut its way through the semi-flooded road, an emission-blackened teddy bear strapped to its radiator like soggy road kill. Father and son had to step back to avoid a soaking. The lorry had no more knowledge of them as it sailed away into the dark than a whale might in an ocean of little fish.”

That’s mine, from the opening chapter of Hands of the Ripper, but it might as well be Campbell’s. On a distinctly off day.

I hope he doesn’t decide to haunt me, he would most certainly be good at it. He only lacks a singular qualification, he’s alive and well and still terrifying us with a new novel every year. Somehow, I wouldn’t bank on that to stop him.

Hands of the Ripper is out now through Hammer Books [Paperback / Kindle]. Here’s the synopsis:

On a cold, wet night recently widowed psychology lecturer John Pritchard visits spiritualist Aida Golding with his son Although wary something has driven him here And he is drawn to a troubled young woman who is trying to contact her child Something about her intrigues him and despite his doubts he continues to attend meetings One night at an intimate séance in Aida's house the lights go out and one of the group is brutally murdered John has his suspicions but he can't prove anything He senses that Aida has some hold over the girl and he offers her a place of refuge in his home But the past haunts Anna in the most chilling of ways And all too soon John realises he’s made a terrible mistake .

Guy Adams trained and worked as an actor for twelve years before becoming a full-time writer. He is the co-author of The Case Notes of Sherlock Holmes, and has written several tie-ins to the TV series Life on Mars, Doctor Who and more. Expanding on his Sherlock Holmes work, he has also authored a pair of Sherlock Holmes novels – The Breath of God (October 2011) and The Army of Dr. Moreau (July 2012). 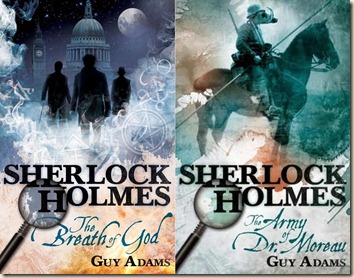 Adams has also written a pair of well-received horror novels for Angry Robot Books, The World House and Restoration. 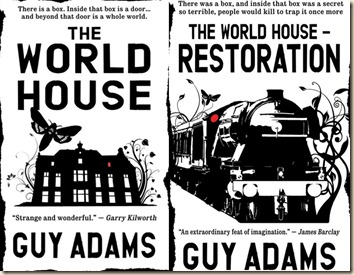